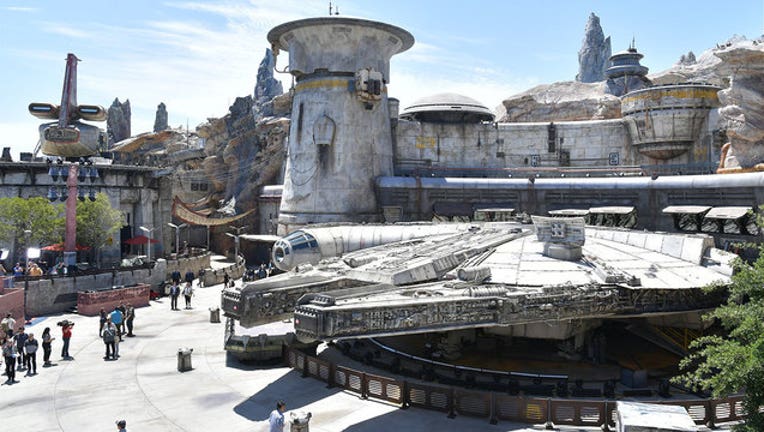 ANAHEIM, Calif. - On Friday, after years of planning and construction, Disneyland finally gave fans a chance to explore Star Wars: Galaxy's Edge, which company officials say includes the largest and most technologically sophisticated attraction at the Anaheim theme park.

The action takes place on the fictional futuristic planet Batuu, a 14-acre outpost for the "resistance'' in its never-ending battle against the First Order. While on Batuu, Star Wars fanatics will get a chance to go on a smuggler's run on the Millennium Falcon and refresh themselves with Blue or Green Milk or sweet-and-spicy popcorn.

As for souvenirs, there's a chance for guests to build their own droid and lightsabers or pick up some gear in the battle against the dark side at Black Spire Outfitters. There's more coming, too. By year's end, Disneyland plans to open Star Wars: Rise of the Resistance, which will allow fans to immerse themselves in the battle.

On Millennium Falcon: Smuggler's Run, guests will go on a cargo run that features multiple storylines depending on how they pilot Han Solo's beloved "bucket of bolts.''

The designers started with replicating the spaceship from the set, but making it feel like a real spacecraft.

Asa Kalama, who designed the Millennium Falcon: Smugglers Run attraction, said the ride starts with Hondo Ohnaka, a character from the animated TV series, being loaned the ship by Chewbacca. From there, guests work as a team to pick up cargo needed by the resistance.

Doug Chiang, who designed the Black Spire Outpost on Batuu, told reporters this week that the team went "location scouting'' in Istanbul and Marrakesh for inspiration because many of the original designs for the first film in 1977 echo that type of architecture. He also pointed to several classic paintings of Istanbul market scenes that provided some inspiration.

They were also inspired by the topography in Arizona, Chiang said.

For refreshments, snacks will be served at Kat Saka's Kettle, drinks at Oga's Cantina, which features tunes by DJ R-3X, a droid also known as Rex, and grub at Docking Bay 7 Food and Cargo. Barbecue is served up at Ronto Roasters, and the Blue and Green Milk will be available at the Milk Stand.

Visitors will also get a chance to download an app that will "transform'' their smart phones into a "Star Wars Data Pad.'' With it, guests can "hack'' a droid or "overhear'' conversations between Stormtroopers and translate alien languages.

After June 23, admission will depend on capacity.

A similar attraction will open Aug. 29 at the company's theme park in Orlando.