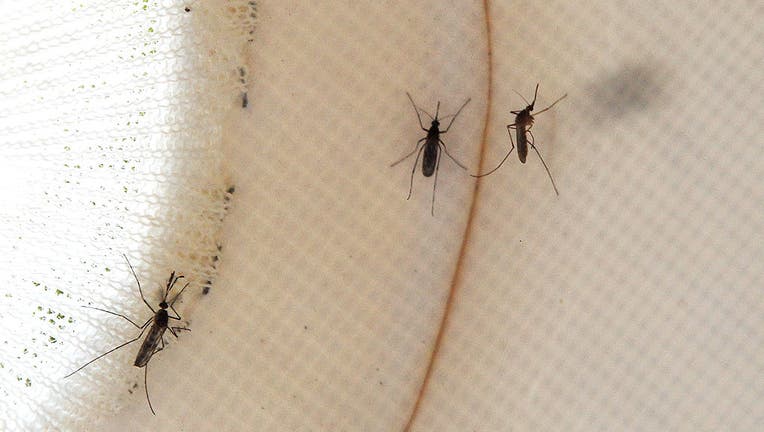 FILE - Mosquitoes are seen inside a trap on June 29, 2012 in Pleasant Hill, California. (Justin Sullivan/Getty Images)

A study released on Aug. 20, which is also World Mosquito Day, revealed that rising temperatures caused by climate change have contributed to a consistent presence of West Nile virus cases in the United states, according to the study published in Medical News Today.

The study, West Nile virus in the U.S.: A case study on climate change and health, features data collected from the Centers for Disease Control and Prevention (CDC) that shows temperature changes in the U.S. and the accompanying spread of West Nile virus between 1900 to 2020.

“The world is focused on the COVID-19 pandemic right now, but other diseases are still out there and on the attack,” said Medical News Today Editor in Chief Robin Hough. “Understanding how West Nile virus spreads and its relationship to climate change helps us educate our audience about disease prevention, including West Nile and similar viruses.

“Humans can control the impact on the environments we inhabit,” Hough added. “That is, perhaps, the most crucial step in ensuring we do not accelerate the arrival of another future health crisis.”

“[Some examples are] diseases, such as West Nile, Zika, [and] malaria. We should have every reason to expect that climate is going to make places [that used to be] less suitable to these diseases more suitable [to them] and vice versa,” Dr. Aaron Bernstein, the interim director of the Center for Climate, Health and the Global Environment at Harvard University in Cambridge, MA, told Medical News Today.

The study highlighted how some of the key factors that helped spread the virus throughout the country were the extreme temperatures and in some areas, the frequency of droughts.

Another factor that has seen more significance between 2004 and 2019 has been the temperatures exhibited in the Southwest, and particularly in California. Temperatures in this area have been consistently high and on average have seen low levels of precipitation.

“Multiple factors impact the complex epidemiology of [West Nile virus] besides its transmission and distribution,” Paz wrote. She also noted that weather conditions are some of the top determinants in this equation. “Generally,” Paz points out, “during the past 50 years, the average temperature across the [U.S.] has risen, while precipitation has increased by an average of about 5%.”

“Some extreme weather events, such as heat- and cold-waves, intense precipitation events, and regional droughts, have become more frequent and intense,” she added.

Bernstein added that “one of the clearest problems for health related to climate change is that climate change is making it too hot for plants to be grown where they usually grow, causing more heavy downpours and more droughts.”

“People who are undernourished are much more vulnerable to infections,” Bernstein emphasized. “Climate change is affecting the full breadth of what it means to be leading a healthy life.”

Bernstein also stressed the importance of how the world can help by reducing their carbon footprint, which help slow climate change and it’s disastrous effect on the planet.

“The good news with that is that many of the things we need to do to reduce our reliance on fossil fuels also will bring better health right now in the communities in which they are taken, and particularly benefit people whose health may be most vulnerable already,” Bernstein concluded.