Tent city set up to protest lack of housing for homeless

Dozens of tents line the Ben Franklin Parkway at 22nd Street in protest of lack of long-term housing for the homeless in Philadelphia.

PHILADELPHIA - Dozens of tents line the Ben Franklin Parkway at 22nd Street in protest of lack of long-term housing for the homeless in Philadelphia.

"Some of us are ex-military, some ex-cons, and it's about people that's trying to get their life together," said Leonard Flowurs.

He says it’s about equality for the homeless.

"It's like prejudice towards the kind of help you get and towards your background whether its black lives, whether it's ex-military or mental health," said Flowurs. 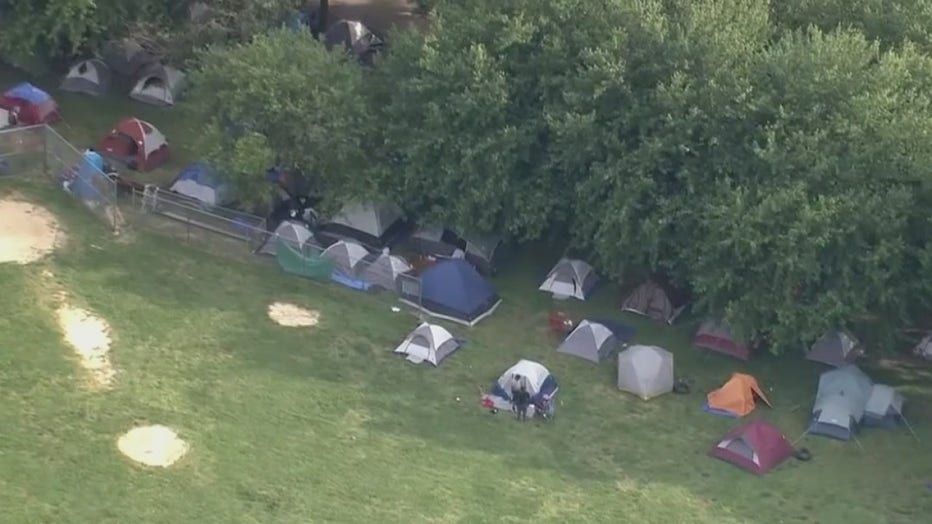 Jennifer Bennetch is the co-organizer of this encampment started by Workers Revolutionary Collective and she says she's the organizer of Occupy PHA.

"We camped out at the Housing Authority's $45M headquarters for five months last year to bring awareness to their role in selling public housing to private developers and then this year we all had witnessed three encampment evictions," said Bennetch.

People who live in the area have mixed feelings about their new "neighbors".

"It doesn't really bother me as long as they're not breaking into cars and what not," said Tony Schneider.

A woman who didn't want to be identified says the issue lies with local government officials.

"They need to do a better job to secure affordable housing. You look over here they're building two $3 million condos," she said. “Would I want to see this become a permanent fixture here? I don't think that I would but I understand why they're using the platform that they have," the woman added.

City spokesperson Mike Dunn gave FOX 29 a statement which reads in part, “The city respects the right of people to protest peacefully. However tent encampments often pose a health and safety threat, and are specifically prohibited on park property. The city reached out to representatives over the weekend with an offer to meet and listen."

He says they made clear hotel rooms and private bathrooms are available for those who are vulnerable to COVID-19 and pointed out this protest wasn't started by the homeless but the group Workers Revolutionary Collective recruited homeless people to join.