SARASOTA, Fla. - An out-of-control pickup truck plowed into Sarasota-Bradenton International Airport overnight, causing a significant amount of damage but avoiding any people inside.

The crash happened Thursday around 2:51 a.m. in the baggage claim area. The speeding truck smashed through a cinderblock wall, according to Fredrick Piccolo, president and chief executive officer of the airport.

Surveillance video from inside and outside the Sarasota-Bradenton International Airport shows a speeding truck driving across the taxiway before crashing into the airport wall and into the baggage claim area.

The white pickup truck, Piccolo said, was heading north on U.S. Highway 41 when it crashed through a perimeter fence, then drove across the air carrier ramp -- not far from the parked aircraft -- at a "very high rate of speed." The truck crossed the ramp and crashed through the wall of the baggage claim area, where it remained until a tow truck arrived.

"We actually had a late flight, but no one else was here in the baggage claim area except a couple of workers," Piccolo explained to FOX 13. "If this happened during the day, it would've been a much different story." 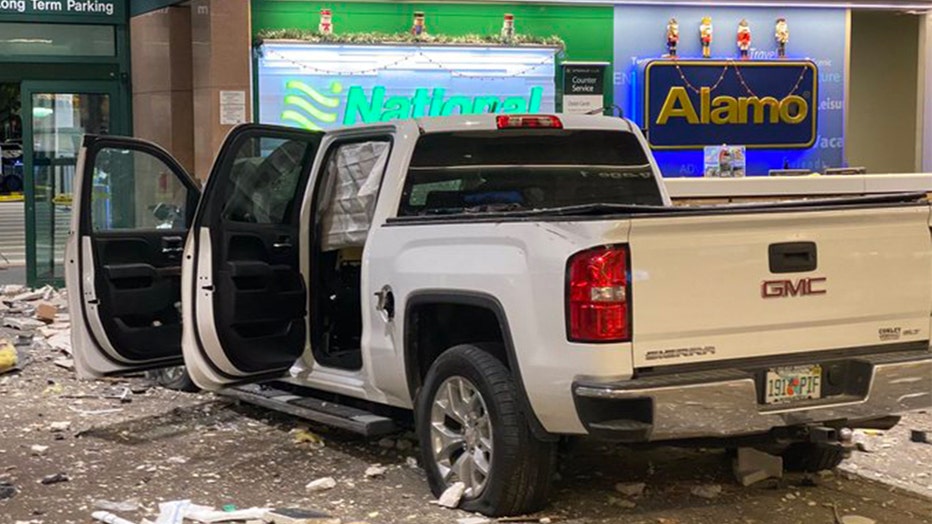 The heavy duty, white pickup truck was apparently speeding when it crashed through the baggage claim wall. (Fredrick Piccolo)

Piccolo said the truck damaged one of the baggage belts before hitting the counter shared by Alamo Rent-A-Car and National Car Rental. Surveillance video shared by the airport showed an employee working at the counter as the careening truck came crashing in, stopping just feet away.

"Luckily, the two people behind the rental car area were not hurt," Piccolo explained. "It was a single driver...I don't have any other information on him right now."

The driver was 40-year-old Juan Monsivis, of Bradenton. He was taken to Sarasota Memorial Hospital with serious injuries. The airport director believes the truck was going over 100 miles an hour. Law enforcement officials say Monsivis has a history of arrests for drugs, DUI and driving on suspended licenses, as recently as 2010, but troopers haven't said what led to this. 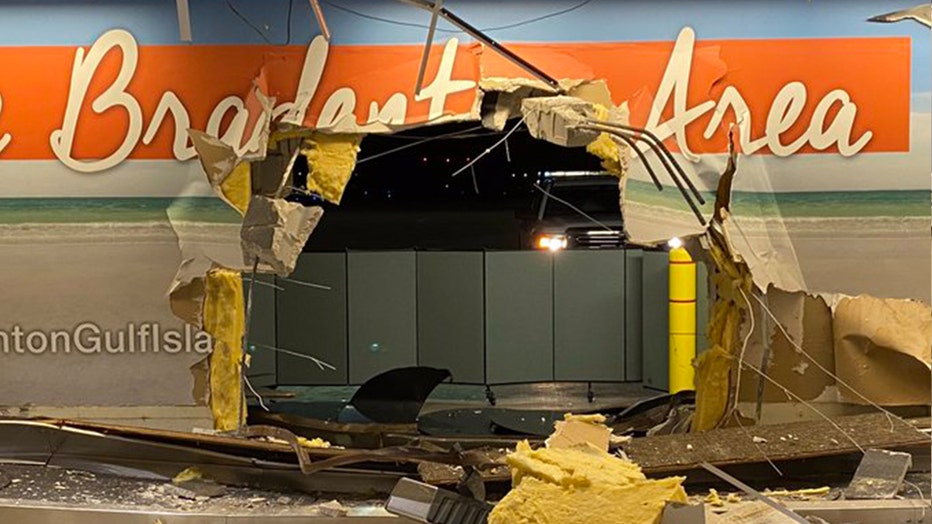 The hole left behind after the pickup truck crashed into the baggage claim area of the Sarasota-Bradenton International Airport. (Fredrick Piccolo)

"It will be down one baggage belt during a very busy time of the year," he said. "It's going to be our busiest week."

Otherwise, it will be business as usual at the airport.

"We'll be operational in time for our first flight without a problem," Piccolo added.

Pickup truck that crashed into Sarasota airport gets towed