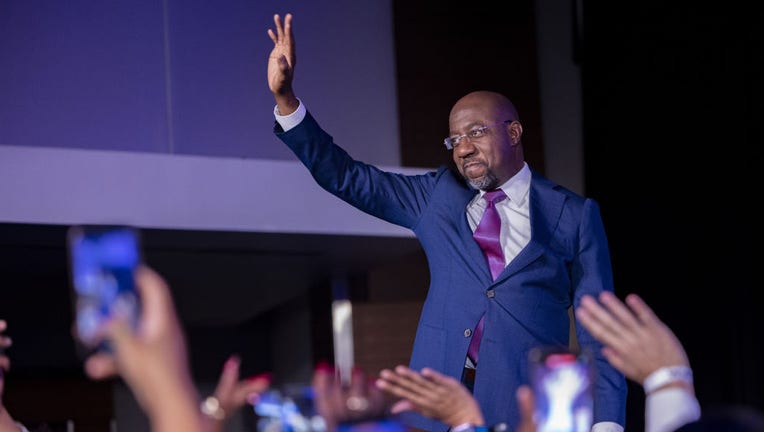 The win for Warnock, a Baptist pastor and his state's first Black senator, also further solidifies the Peach State as a potential 2024 presidential battleground.

Democrats celebrated the defeat after the race was called by the Associated Press and others, with President Joe Biden tweeting a photo of his congratulatory phone call to the senator.

Democrat Sen. Raphael Warnock, who won re-election to a full term in the Senate against GOP nominee Herschel Walker, thanked supporters and said there was still work to be done. As the first Black Senator from Georgia, Warnock said his win embodies progress for the state, with its history from slavery to the civil rights movement. "I am Georgia, I am example and an iteration of its history," Warnock said. Warnock's win means Democrats have expanded their majority to 51-49, and will have more control over Senate committees.

With Warnock’s win, Democrats will have a 51-49 Senate majority, gaining a seat from the current 50-50 split with John Fetterman’s victory in Pennsylvania.

There will still be a divided government, however, with Republicans having narrowly flipped House control.

Why one Senate seat is crucial for Democrats

With Warnock's victory, Democrats have not only secured a two-seat majority in the chamber — with less of a need for the negotiated power-sharing agreement or Vice President Kamala Harris' tie-breaking vote — but now also hold a partisan edge on Senate committee leadership positions.

Specifically, the 51-49 Senate means that Senate Majority Leader Chuck Schumer won’t have to work out a power-sharing agreement with Republican leader Mitch McConnell. The two parties had to do that two years ago and also in 2001, the last time the Senate was evenly split.

In early 2021, confirmations of new President Joe Biden’s nominees were stalled for several weeks while Schumer and McConnell worked out an agreement on how to split committees and move legislation on the Senate floor. Using the little leverage he had, McConnell threatened not to finalize a deal until Democrats promised that they wouldn’t try to kill the legislative filibuster that forces a 60-vote threshold.

The Republican leader finally relented after two Democratic senators — West Virginia’s Joe Manchin and Arizona’s Kyrsten Sinema — made it clear they would not support such a move on the filibuster.

A 50-50 Senate "slows everything down," Senate Majority Leader Chuck Schumer said in an interview in November. "So it makes a big difference to us."

Committees have also been evenly split between the two parties due to the 50-50 power-sharing deal. This often creates extra steps when a committee vote is tied, forcing Democrats to hold votes on the Senate floor to move ahead with bills or nominees.

Having now won an outright 51-seat majority, Democrats will likely hold an extra seat on every committee, making it much easier to move nominees or legislation on party-line votes.

"It’s always better with 51, because we’re in a situation where you don’t have to have an even makeup of the committees," Biden said after the midterm elections. "And so that’s why it’s important, mostly. But it’s just simply better. The bigger the numbers, the better."

Democratic Sen. Raphael Warnock will defeat Republican challenger Herschel Walker in Georgia's high stakes Senate runoff election, The Associated Press projects. Walker — a former college football legend who won a Heisman trophy at the University of Georgia — launched his Senate campaign in the summer of last year, after months of encouragement to run by former President Donald Trump, his longtime friend. "I am not going to make any excuses now because we put up one heck of a fight," Walker said. "I'm never going to stop fighting for Georgia."

Furthermore, the extra seat gives Democrats the ability to pass bills while losing one vote within their caucus — a luxury they haven’t had over the last two years. Manchin, a moderate from conservative West Virginia, often used the narrow margin to his advantage, forcing Democrats to bend to his will on several pieces of legislation.

Manchin’s opposition to Biden’s sweeping health, climate and economic package stalled it for months, until Schumer negotiated a narrower version with the West Virginia senator. In the end, several of Biden’s legislative priorities were left out.

One of Schumer’s main priorities will be confirming judges nominated by Biden in the last two years of his term, similar to how Republicans did previously under the Trump administration.

A rules change under former Senate Majority Leader Harry Reid, D-Nev., a decade ago allowed the Senate to pass judges with only a simple majority — or 51 votes.

Voters returned Warnock to the Senate in the same cycle they reelected Republican Gov. Brian Kemp by a comfortable margin and chose an all-GOP slate of statewide constitutional officers.

Walker's defeat bookends the GOP’s struggles this year to win with flawed candidates cast from Trump’s mold, a blow to the former president as he builds his third White House bid ahead of 2024.