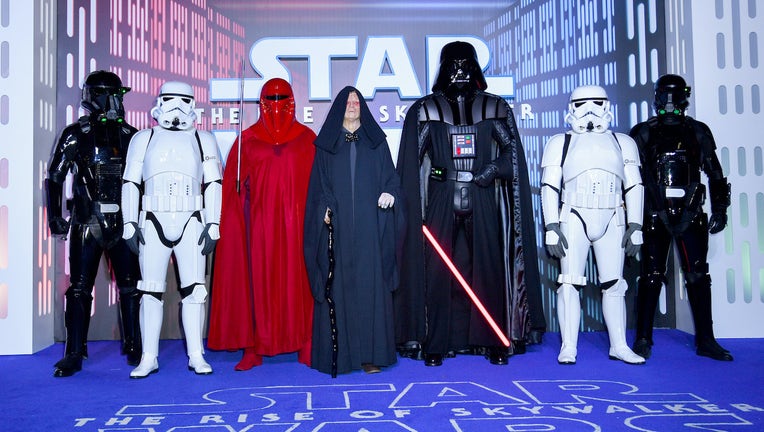 Atmosphere at the European premiere of "Star Wars: The Rise of Skywalker" at Cineworld Leicester Square on December 18, 2019 in London, England. (Gareth Cattermole/Getty Images for Disney)

Heading to the theater is a holiday tradition for many families on Christmas, whether it’s to see a heartwarming piece of art or just to get a break from your relatives. Here are some films to check out this season.

The "Jumanji" gang is back -- this time, they have to re-enter the game to save one of their own. Who doesn't want actors Kevin Hart and Dwayne "The Rock" Johnson to be part of their holidays?

If you’re in the mood for a scary flick, this holiday slasher is right for you, even if it’s not a traditional Christmas genre. This remake follows a group of sorority girls who are stalked on campus, fight off a killer and uncover a conspiracy.

If your family members are history buffs, check out this historical drama. Inspired by true events, an Austrian farmer refuses to fight for the Nazis in World War II.

Critics and audiences have panned this movie, but it might still be a fun time at the movies. This bizarre film is sure to lead to great dinner conversation – the trailer certainly did.

This World War I film follows two British soldiers on a mission in enemy territory. The epic is being praised for its “one, long take” look.

6. “Star Wars: The Rise Of Skywalker”

Despite getting mixed reviews, the newest “Star Wars” film has been dominating the box office. The final chapter of the Skywalker saga may be a hit for young, new viewers or for nostalgia-seeking returning fans.

This coming-of-age story, an adaption of the classic book, follows four sisters in the aftermath of the Civil War. The cast includes stars such as Emma Watson, Saoirse Ronan, Timothée Chalamet and Meryl Streep.