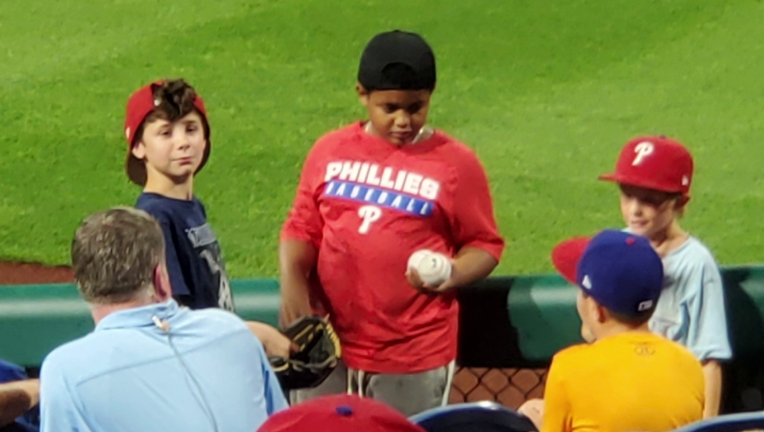 PHILADELPHIA - A 9-year-old boy gave away the foul ball he caught at the Phillies game in an act of kindness that has everyone talking.

In the nearly 3-hour ugly rain-delayed Phillies loss against the Dodgers Wednesday night, the only bright spot came during a 5th inning foul ball and it was captured on camera.

"He didn’t have a ball so I said, Why can’t I give him the ball and he could be happy," Jayden Ham told FOX 29.

FOX 29's Chris O'Connell caught up with 9-year-old Jayden Ham at his home in North Philadelphia. He was at his very first Phillies game with a family friend. Jayden already caught a ball during batting practice and during the game he met 11-year-old Frankie from the northeast. Jayden picks up the play-by-play from there.

"I said next time I get a ball, I’m going to give it to you, so I was including him. I got the ball and I gave it to him because I always keep a promise," he explained.

He not only kept a promise, he gained a new friend and a whole lot of respect. Jayden's generosity has now inspired many others. The Phillies already invited him back as a guest during batting practice.

Former Philadelphia Eagle Chris Long even tweeted, "The next generation of Philly sports fans are in a good mood".

Jayden even has plans to spend the day with Sixers Mike Scott after he tweeted, “Help me find him. I have something for him”.

"He just did what’s in his genes, being kind because he’s a very kind kid," his mom, Mylene Gonzalez, said.

Jayden and Frankie will both be on Good Day Philadelphia Friday morning.