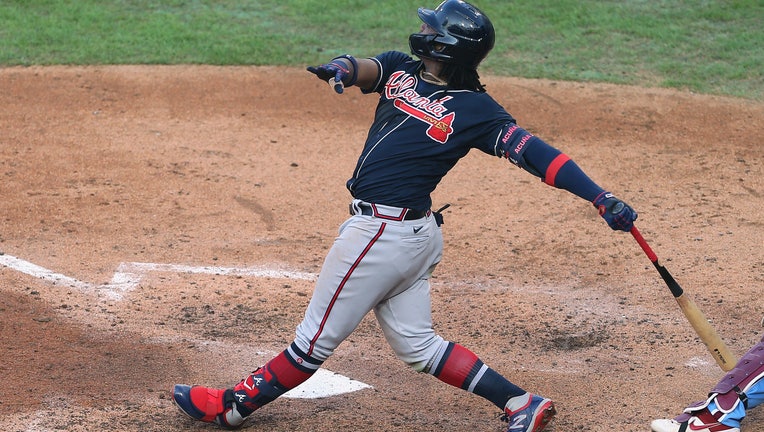 PHILADELPHIA, PA - AUGUST 09: Ronald Acuna Jr. #13 of the Atlanta Braves hits a two run home run during the sixth inning against the Philadelphia Phillies in game two of a double header at Citizens Bank Park on August 9, 2020 in Philadelphia, Pennsyl

PHILADELPHIA - Spencer Howard dreamed of tossing a shutout in front of friends and family in his big league debut. He settled for a few hundred cardboard cutouts in the stands and an early exit on the mound.

“The cardboard cutouts actually made a difference, surprisingly,” Howard said, of calming his butterflies.

Hey, at least they couldn’t boo.

Ronald Acuna Jr. homered twice and Freddie Freeman also went deep to spoil Howard’s anticipated start and lead the Atlanta Braves to a doubleheader sweep of the Philadelphia Phillies with an 8-0 win on Sunday.

Acuna also homered in Atlanta’s 5-2 victory in the first game. He had four hits in the second game and added his fourth career multihomer game.

“I don’t think Ronald needed anybody else on his team today,” Freeman said. “He kind of took care of everything. Pretty amazing to watch. He is a talent that doesn’t come around very often in this game. It seems like he does more special things every single year. ”

The Phillies had waited since the restart to send Howard (0-1) to the mound and show why MLB.com had him ranked as the 36th top prospect in the minor leagues.

Phillies slugger Bryce Harper proclaimed in July that if Howard wasn’t in the starting rotation by the end of the first week of the season, “there’s a problem. That’s all I’ll say.” There was a hiccup — Howard’s bid to crack the rotation was derailed by service issues. The Phillies kept him on their taxi squad in Allentown, Pennsylvania, for enough days to delay his potential free agency until after the 2026 season.

His first inning was fine, striking out Marcell Ozuna swinging on a nasty 85 mph slider that had a gaggle of Phillies fans outside the ballpark blowing air horns and banging cowbells in delight. The 24-year-old Howard, a second-round pick in the 2017 draft, flashed more poise and promise in a neat 13-pitch second inning.

Freeman, though, hit a two-run homer in the third and Acuna had a solo shot to the opposite field in right for a 3-0 lead. Howard struck out Ozuna in the fifth, and the designated hitter snapped his bat after he slammed it in frustration.

“I wouldn’t say I felt sharp, just a little out of sync with my mechanics,” he said.

Atlanta’s Max Fried (3-0) was fantastic in his first three starts of the season (2.04 ERA with 15 strikeouts) and hummed along against the Phillies until he loaded the bases with two outs in the fifth.

Phillies fans nearly 460 feet away chanted “Let’s go, Harper!” but Fried retired him on a fly ball in a lefty-vs.-lefty matchup to escape the jam and send the Braves on their way to the victory in the seven-inning game. He struck out six in five innings.

Acuna hit a two-run shot off Trevor Kelley for a 6-0 lead in the sixth. Acuna is the first Brave with three homers in a doubleheader since David Justice in 1990.

“He’s hitting those balls like a left-handed pull hitter, and they just keep carrying. Good for his confidence. It’s been in the works for him for a while now,” Braves manager Brian Snitker said.

Acuna hit a two-run homer and Adam Duvall had a three-run double to lead the Braves in the opener. Tyler Matzek (2-0) pitched 1 1/3 scoreless innings for the win, and Mark Melancon worked a scoreless ninth for his third save. Acuna went deep off Deolis Guerra (1-1) for the go-ahead homer. The Braves scored five runs in the fifth inning. Phillies starter Vince Velasquez’s struggles continued and he could find himself in the bullpen if Howard emerges as a reliable starter. He threw 76 pitches in four-plus innings at a laborious pace.

The Phillies were supposed to hand out Tug McGraw bobbleheads to fans as part of the 1980 World Series champions weekend celebration. But the figurine never got the call from the promotional bullpen — it was never made.

Most of the giveaways on the 2020 promotions schedule are in storage and will be used next season, said Phillies director of merchandise Scott Brandreth.

The Bryce Harper bobblehead scheduled for June 28, perhaps the most anticipated item on the slate, is secure.

“Keep an eye on the 2021 promotional schedule, when that comes out,” Brandreth said. “We’re working on it right now, finding dates. We’ll put the puzzle back together. I guess in a sense it might be easier to put the schedule together next year. We already know 12 of the items. Most of them are here.”

The exceptions? The opening-day headbands and the 2020 opening weekend T-shirts. They’ve been donated or used to raise money for charity. McDonald’s, which sponsored the T-shirt, gave some shirts to employees and is selling others to raise money for the Ronald McDonald House.

The Phillies send RHP Aaron Nola (0-1, 3.97 ERA) to the mound against Atlanta LHP Sean Newcomb (0-1, 6.57) on Monday to wrap the four-game series. Nola struck out a career-high 12 batters in his last start against the Yankees.