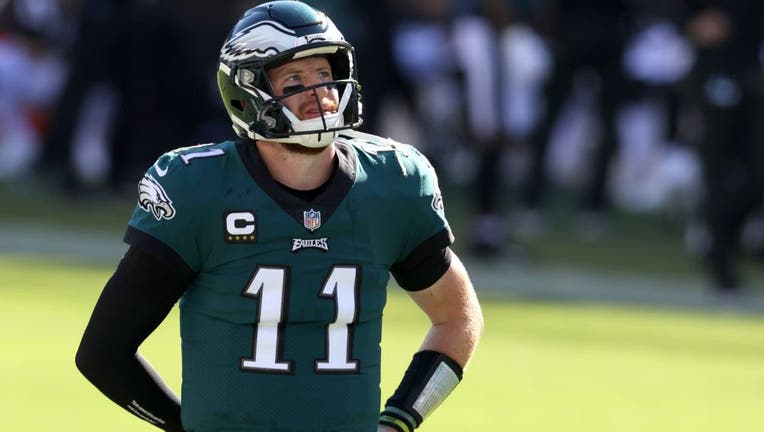 Quarterback Carson Wentz #11 of the Philadelphia Eagles looks on against the Los Angeles Rams in the second half at Lincoln Financial Field on September 20, 2020 in Philadelphia, Pennsylvania. (Photo by Rob Carr/Getty Images)

PHILADELPHIA - The only thing the Philadelphia Eagles did well was protect Carson Wentz.

Aaron Donald and the rest of the Los Angeles Rams didn’t sack Wentz once after the quarterback went down eight times at Washington last week.

It didn’t matter on the scoreboard.

Wentz threw two interceptions, Miles Sanders lost a fumble and Philadelphia’s defense let Jared Goff and the Rams have their way on offense.

Now the Eagles are off to an 0-2 start for the first time in five years following a 37-19 loss to the Rams on Sunday.

“We’re not panicking. The sky is not falling,” Wentz said. “We have the potential with the pieces we have on this offense to be elite, to be great and we’re excited to come out (next week) and start showing it.”

A fumble by Sanders on the third play of the game led to a short TD drive by the Rams and Philadelphia’s defense couldn’t do anything to slow down Goff, who started 13 for 13 on the way to a 21-3 lead.

Once the Eagles finally got going on offense, they had momentum and a chance to take the lead in the third quarter. But Wentz’s pass from the Rams 21 on first down intended for J.J. Arcega-Whiteside was intercepted by Darious Williams.

“They had us covered well,” Wentz said. “I got pretty aggressive, tried to force one in there. The guy made a great play. I gotta be smarter there. But we know we’re right there. We had (three turnovers). Turning the ball over is killing us. We have to clean it up.”

After wasting a 17-0 lead in a 27-17 loss at Washington, the Eagles got a better performance from their offensive line with three-time Pro Bowl right tackle Lane Johnson returning from an ankle injury.

Sanders ran for 95 yards and one score in his first action this season after sitting out training camp with a hamstring injury.

“It’s very frustrating but it’s a long season and we’re going to have opportunities,” Sanders said. “It takes resiliency and that’s the type of team we have.”

The Eagles have overcome plenty of challenges the past three seasons. They lost Wentz and several key starters in 2017 and went on to win their first Super Bowl title. They lost Wentz in 2018 and Nick Foles stepped in again, led them to three must-win games down the stretch to get in the playoffs and also guided them to a wild-card win.

Adversity has arrived in September this time.

“Confident that we can turn this around,” defensive end Brandon Graham said. “When you look at certain parts of the game, if we don’t beat ourselves in certain situations, we get off the field on defense and then we can’t give up the ball and then on defense we gotta have the offense’s back. We just have to stick together and I believe we’re going to do that.”