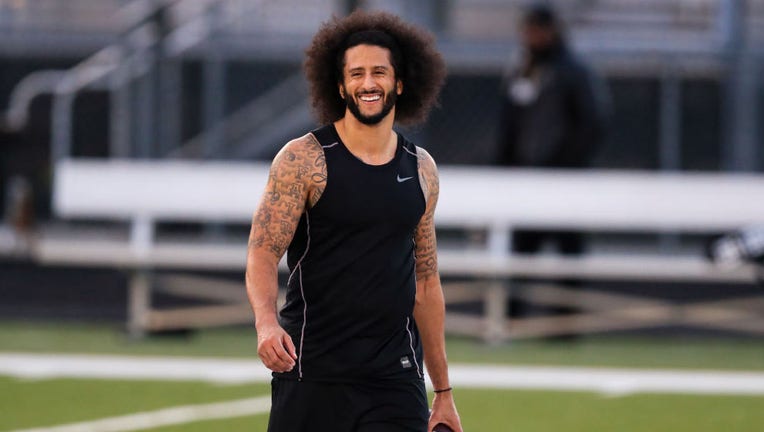 Kaepernick, who led the San Francisco 49ers to the Super Bowl following the 2012 season, last played in the NFL in 2016, the same year he started kneeling during the national anthem to protest racial injustice and police brutality.

Kaepernick and former teammate Eric Reid filed collusion grievances against the league, saying they were blacklisted because of protests during the anthem at games. They reached a settlement in 2019.

In 2017, the Baltimore Ravens considered signing Kaepernick when former starting quarterback Joe Flacco was dealing with a back injury that would keep him out for the entire preseason. Owner Steve Bisciotti said he consulted with fans and the team ultimately passed.

Two years later, the NFL organized a workout for Kaepernick in Atlanta in November 2019, but it turned chaotic and resulted in no job offers.

Seattle Seahawks head coach Pete Carroll said in March that Kaepernick reached out to him about a potential return to the NFL. Carroll cautioned that if the former quarterback were to get an opportunity it may not be in Seattle, but with another team.

Over the past couple of months, Kaepernick, 34, has posted multiple workout videos performing quarterback drills to showcase to NFL teams that he still has the ability to play at an elite level.

Michigan Wolverines head coach Jim Harbaugh invited Kaepernick down to Ann Arbor, Michigan to be an honorary captain for the Wolverines Maize and Blue Spring game in March.

Kaepernick played for Harbaugh in San Francisco and led the team to Super Bowl XLVII where they lost to the Ravens in 2013.

FOX 6 Milwaukee, FOX 2 Detroit, and the Associated Press contributed to this story. This story was reported from Washington, D.C.