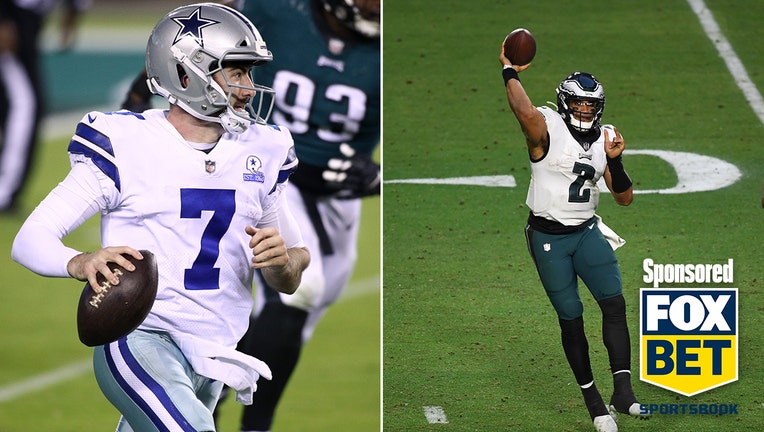 LEFT: Dallas Cowboys Quarterback Ben DiNucci (7) scrambles under pressure in the second half during the game between the Dallas Cowboys and Philadelphia Eagles on November 01, 2020 at Lincoln Financial Field in Philadelphia, PA. (Photo by Kyle Ross/I

By the time the Philadelphia Eagles and Dallas Cowboys trudge off the turf at AT&T Stadium on Sunday night, it is certain that one team will be eliminated from the NFC East race.

It is possible that both of them could be out of the playoff hunt, as well. And there’s a scenario that one of them- in this case, the Eagles- could be heading home with a chance to host a division championship game.

That’s what makes this showdown so intriguing when 4-9-1 Philadelphia travels to Texas to face 5-9 Dallas for a 4:25 p.m. start (FOX).

FOX Bet Sportsbook is your sports betting home to get the latest odds, prop bets and bet boosts. Check it out now for special promotions when you open an account. FOX Bet is available in Pennsylvania, New Jersey, Colorado and Michigan through the Fox Bet app and online at FOXBet.com.

Both teams are among the worst in the NFL against the spread. Philadelphia is 5-9 while Dallas is 4-10.  On the over/under, Dallas and their opponents have gone over eight times in 14 games while the Eagles are 6-8 on the over-under.

There are plenty of CustomBets, PropBets and other wagers available at FOXBet.com to suit any gambling needs.  Check it out now.

Sunday will be the second meeting of the year between the two teams. The first one back on Nov. 1 in Philadelphia ended with a 23-9 Eagles victory. That was the height of Dallas’ struggles with injuries as Ben DiNucci started at quarterback for the Cowboys after injuries knocked both Dak Prescott and Andy Dalton out in back to back weeks. Carson Wentz struggled with three turnovers and just 123 yards passing with two touchdowns.

Overall, Dallas leads the series 69-54 with the Cowboys winning four of the last six games between the two teams.

The Cowboys held onto their playoff hopes last week with a 41-33 win over the 49ers. Dallas forced four San Francisco turnovers in the game, allowing the Cowboys to play on short fields. Tony Pollard- playing for the injuried Ezekiel Elliott- scored two touchdowns in the win. The Cowboys have won two in a row for the first time this season. Dallas can still be in the NFC East race with a win and a Washington loss at Carolina, who will be playing at the same time.

The Eagles are in the same spot- needing Washington to lose and a win to stay alive- but have the Football Team in their park the following week if they win with a chance to win the NFC East. The biggest storyline, however, is the emergence of Jalen Hurts at quarterback in two-plus weeks since taking over for Wentz in the second half of the Packers. Hurts scored four touchdowns in the 33-26 loss to Arizona last week – three passing, one rushing- while throwing for 338 yards. One problem that has stuck for Philadelphia through the quarterback change is sacks. The Eagles allowed six more last week to bring their season total to 59. It is the highest mark in the league- 11 ahead of second-worst Cincinnati’s 48.