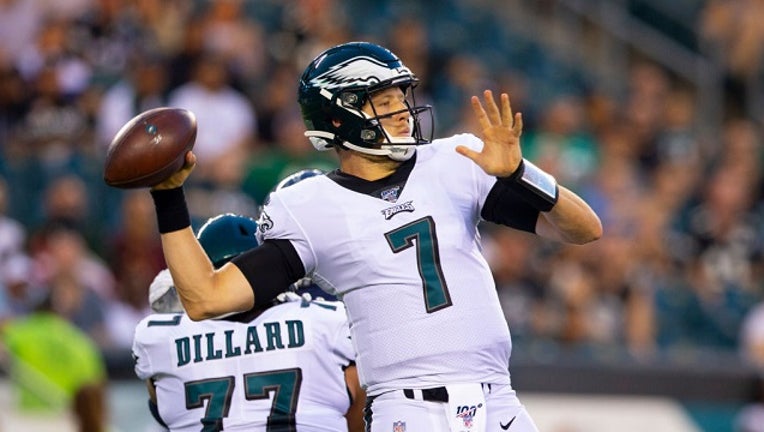 Nate Sudfeld #7 of the Philadelphia Eagles throws a pass against the Tennessee Titans in the first quarter of the preseason game at Lincoln Financial Field on August 8, 2019 in Philadelphia, Pennsylvania. (Photo by Mitchell Leff/Getty Images)

PHILADELPHIA (AP) -- Eagles backup quarterback Nate Sudfeld left the sideline on a cart after injuring his left arm on a late hit in the second quarter of Philadelphia's game against Tennessee.

Sudfeld fell backward after a personal foul by Isaiah Mack and immediately went to the sideline. He was wearing an air cast on the cart ride to the locker room. Cody Kessler replaced him and took a late hit from Nigel Harris on his first play.

Sudfeld started instead of Carson Wentz as Eagles coach Doug Pederson gave almost all of his healthy starters a night off. Sudfeld threw a 75-yard touchdown pass to Marken Michel and finished 10 of 18 for 177 yards.

Sudfeld, who has thrown 25 passes in two seasons with the Eagles, is replacing Nick Foles as the backup quarterback. Foles, the Super Bowl MVP in Philadelphia's 41-33 win over New England in February 2018, signed an $88 million, four-year deal with Jacksonville in free agency.