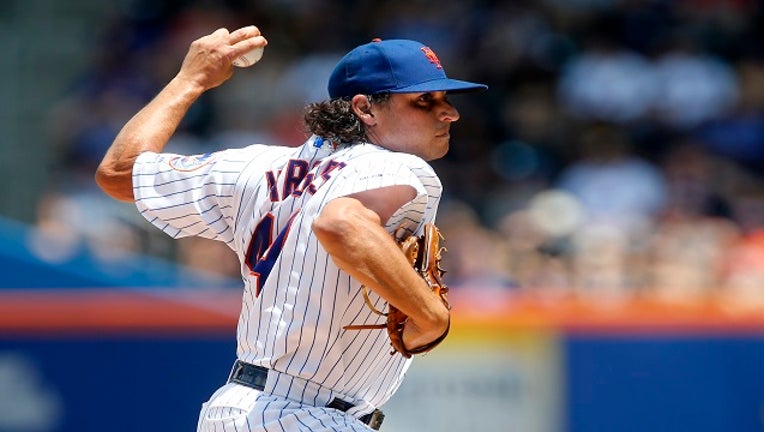 Jason Vargas #44 of the New York Mets pitches during the first inning against the Pittsburgh Pirates at Citi Field on July 28, 2019 in New York City. (Photo by Jim McIsaac/Getty Images)

The 36-year-old Vargas is 6-5 with a 4.01 ERA, winning his last three starts. He became expendable when the Mets acquired right-hander Marcus Stroman from Toronto on Sunday night for a pair of pitching prospects.

Vargas could start Friday night against the Chicago White Sox on normal four days' rest. Zach Eflin, who is scheduled to pitch that night, has a 10.46 ERA in his last six starts.

The Phillies were off Monday after losing two of three to the NL East-leading Braves and falling 7½ games behind. But they're only one game back second the second NL wild card heading into a three-game series against San Francisco starting Tuesday.

Vargas' ERA would be second to Aaron Nola on Philadelphia's staff and his WHIP (1.27) would rank first. Opponents are batting just .228 against Vargas despite a fastball that averages just 85 mph.

Vargas and Mets manager Mickey Callaway were fined by the team last month for their profanity-filled confrontation with a reporter following a loss to the Cubs at Wrigley Field.

The 26-year-old Bossart is hitting .195 with seven homers and 28 RBIs at Reading of the Eastern League. He was a 14th-round pick in the 2015 amateur draft from the University of Pennsylvania.