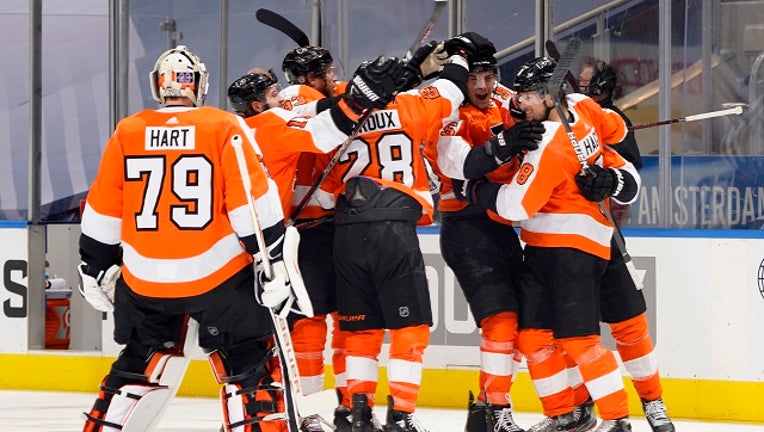 TORONTO - Phillippe Myers scored 2:40 into overtime to give the Philadelphia Flyers a 4-3 victory over the New York Islanders 4-3 on Wednesday, tying the second-round playoff series at a game apiece.

The Islanders overall a 3-0 first-period deficit, with Jean-Gabriel Pageau getting the tying goal with 2:09 left in regulation.

Myers ended it quickly, connecting on a shot from the right point that glanced off the stick of the Islanders' Anders Lee on the way in.

Kevin Hayes scored twice in the first period for Philadelphia, Sean Couturier also had a goal, and Carter Hart made 31 saves.

Lee and Anthony Beauvillier also scored for the Islanders. Semyon Varlamov had seven saves before he was benched late in the first period. Thomas Greiss finished with 20 stops the rest of the way.

The Flyers scored three times in the first 15:09, chasing Varlamov. He had shut them out in Game 1 and built an Islanders’ playoff record shutout streak of 138:17 before Philadelphia broke through in the first period.

The Flyers, the top seed in the Eastern Conference, sorely needed more production from their top goal-scorers and finally got it.

Hayes scored off a rush with a wrister from the left circle that rattled in off the post 1:57 into the game. Hayes got his second when he beat Varlamov with a sharp-angle shot from the left at 9:43.

Couturier followed later in the period with a slick one, picking up the puck in the neutral zone, slipping around defenseman Nick Leddy and deking Varlamov. That’s when Greiss was sent in to make his playoff debut in relief of Varlamov.

The momentum started to even out in the second period. With the Islanders on a power play, Lee tipped in a beautiful cross-ice feed from Mathew Barzal to get New York on the board.

Beauvillier made it a one-goal game on a rush 11:11 into the third period. Pageau lifted a wrist shot over Hart's glove to tie the game with 2:09 left, despite a Flyers' claim that New York was offside entering the zone.