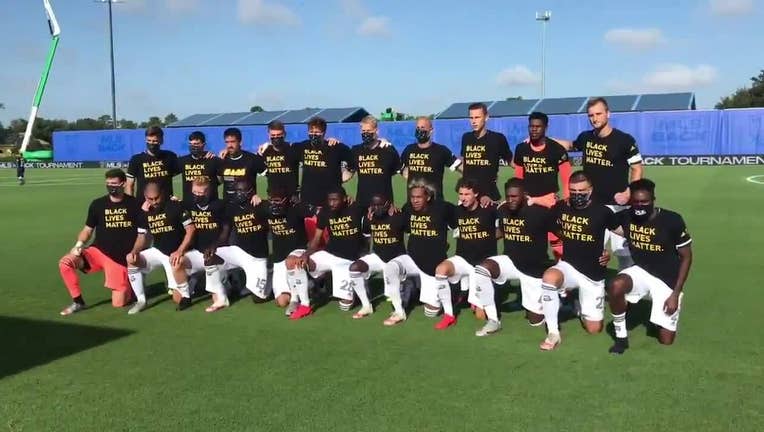 In a short video posted on the team's social media accounts, the team stands up and removes the shirts to show the names of victims of police brutality on their backs.

The Union played and won their first match of the Major League Soccer restart on Thursday morning against New York City FC.

A tweet shared on the team's account with the video read, "Our players stand together. One name too many."

ESPN reports Union captain Alejandro Bedoya will also wear an armband during the MLS is Back Tournament that features the same names.

Players wore black T-shirts, black gloves and black facemasks emblazoned with Black Lives Matter. The shirts had varying slogans that included Black And Proud, Silence Is Violence and Black All The Time.

The players walked toward midfield, raised their right arms one at a time and held the pose so long that some could be seen stretching fatigued muscles afterward.

It was a poignant moment that put two of the nation’s most prominent changes over the last four months — masks and movements — at the forefront of the sport’s return.

MORE: MLS returns to action after poignant moment of silence

The group was formerly called the Black Players Coalition of MLS but changed its name this week to Black Players for Change. Originally announced on Juneteenth, the group started in the wake of George Floyd’s death with the hope of combating systemic racism both in soccer and the players’ communities. The league and the players’ union endorsed the organization.

Several other players from Orlando City and Inter Miami took a knee near midfield during the demonstration. Orlando's Nani scored in the seventh minute of stoppage time and held on for a 2-1 victory over expansion Miami.

The two in-state teams delivered their own moment of silence by taking a knee along with the referee and the line judges just before the opening kick.

The national anthem was not played before or after the demonstration. MLS previously said it would not be played because no fans were in attendance.