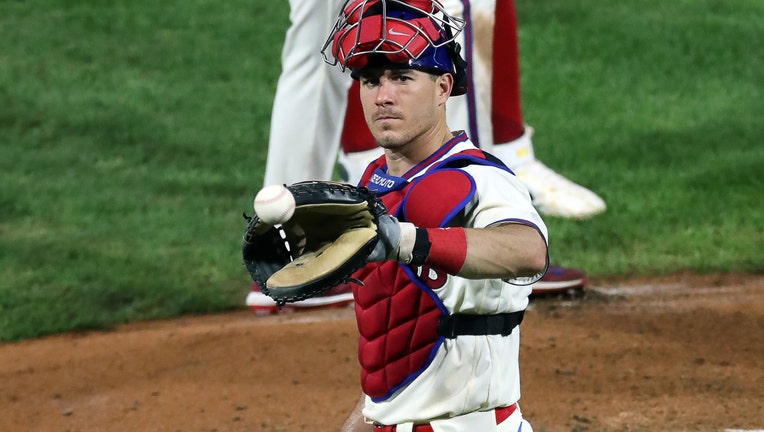 J.T. Realmuto #10 of the Philadelphia Phillies during a game against the Boston Red Sox at Citizens Bank Park on September 8, 2020 in Philadelphia, Pennsylvania. The Red Sox won 5-2. (Photo by Hunter Martin/Getty Images)

Realmuto is scheduled to speak to reporters on Monday.

Realmuto gets $20 million next season, of which $10 million is deferred, with $5 million each payable in 2026 and 2027, a person familiar with the deal told The Associated Press on Tuesday. Realmuto gets $23,875,000 in each of the final four years.

He does not have a no-trade provision. The deal includes a $1 million assignment bonus if traded.

Realmuto’s average annual salary of $23.1 million became the highest for a catcher, topping the $23 million Joe Mauer averaged in a $184 million, eight-year deal with the Minnesota Twins that covered 2011-18.

Realmuto was acquired from the Marlins in February 2019 in a trade that sent right-hander Sixto Sánchez and catcher Jorge Alfaro to Miami along with pitching prospect Will Stewart and $250,000 in international signing bonus pool allocation.

Realmuto made his second NL All-Star team with the Phillies in 2019 and earned a Gold Glove. He had career-highs in homers (25), RBIs (83) and slugging percentage (.493) that season.

His deal is the second-largest of the offseason behind outfielder George Springer’s $150 million, six-year contract with Toronto.

To make room for Realmuto on the 40-man roster, the Phillies designated right-hander Ian Hamilton for assignment. Hamilton had been claimed off waivers from the Seattle Mariners last month.