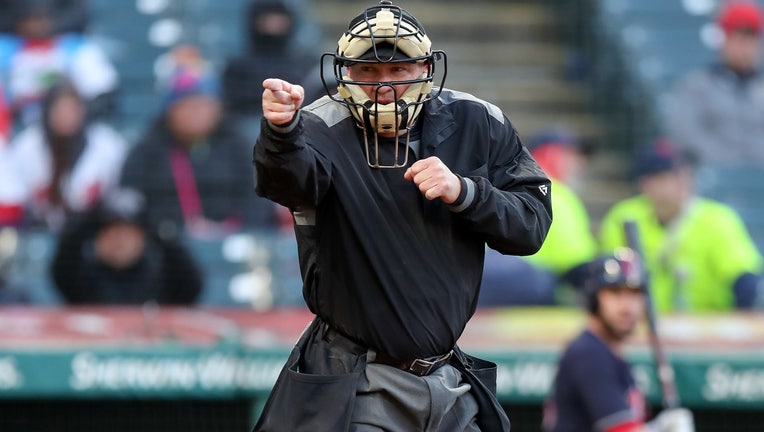 The independent Atlantic League became the first American professional baseball league to let a computer call balls and strikes Wednesday night at its All-Star Game. Plate umpire Brian deBrauwere wore an earpiece connected to an iPhone in his pocket and relayed the call upon receiving it from a TrackMan computer system that uses Doppler radar.

He crouched in his normal position behind the catcher and signaled balls and strikes.

"Until we can trust this system 100%, I still have to go back there with the intention of getting a pitch correct because if the system fails, it doesn't pick a pitch up or if it registers a pitch that's a foot-and-a-half off the plate as a strike, I have to be prepared to correct that," deBrauwere said before the game.

It didn't appear deBrauwere had any delay receiving the calls at first, but players noticed a big difference.

"One time I already had caught the ball back from the catcher and he signaled strike," said pitcher Daryl Thompson, who didn't realize the technology was being used until after he disagreed with a call.

Infielder L.J. Mazzilli said a few times hitters who struck out lingered an extra second or so in the batter's box waiting on a called third strike.

"The future is crazy, but it's cool to see the direction of baseball," said Mazzilli a son of former big league player and manager Lee Mazzilli.

The umpires have the ability to override the computer, which considers a pitch a strike when the ball bounces and then crosses the zone. TrackMan also does not evaluate checked swings.

"If the umpire still has discretion, it defeats the purpose," said Nieuwenhuis, who batted .221 with 31 homers in 978 at-bats with the Mets, Angels and Brewers.

About 45 minutes before first pitch, the public address announcer directed fans to look up at the black screen hanging off the face of the upper level behind the plate and joked they could blame the computer for any disagreements over calls.

"This is an exciting night for MLB, the Atlantic League, baseball generally," said Morgan Sword, MLB's senior vice president of economics and operations. "This idea has been around for a long time and it's the first time it's been brought to life in a comprehensive way."

The experiment with radar-tracking technology to call balls and strikes was originally expected to begin at the start of the season but experienced some delays.

Atlantic League President Rick White said it's going to be implemented league-wide over the next few weeks.

"After that, we're relatively confident that it's going to spread through organized baseball," White said. "We're very excited about what this portends not only for our league but for the future of baseball. What we know is technology can help umpires be more accurate and we're committed to that. We think the Atlantic League is being a pioneer for all of the sport."

"One of our focuses is not to replace the umpire," Sword said. "In fact, we're trying empower the umpire with technology. The home plate umpire has a lot more to do than call balls and strikes and he's going to be asked to do all of that. We're in touch with our umpires' union and this is the first step of the process."

DeBrauwere had no issue with it.

"This is just another plate job and I just get a little help on this one so I feel very relaxed going into this one," he said.

Strike zones are determined according to the average for players of that height unless there's already information on a player's particular strike zone if they've played in the majors at some point.

"Technically, they're strikes, but umpires never called them," Atkins said.

MLB Commissioner Rob Manfred said there's no timeline on when the technology will be used in the majors.

"We need to see how it works, first in the Atlantic League and then probably other places, meaning other parts of minor league baseball, before it comes to Major League Baseball," Manfred said. "Kind of gets back to the question that I was asked earlier about the baseball, we hear all the time from players, why don't we have an electronic strike zone, why don't we have an electronic strike zone? We try to be responsive to those sorts of expressions of concern. We have spent a lot of time and money on the technology. It's not just to address player concerns. It obviously has broadcasting uses. That same technology can be used in our broadcast, which has value to our fans. But we feel it's incumbent upon us - people that play the game raised this as something that could make the game better. We kind of feel it's incumbent on us to figure out whether we could make it work. And that's what we're doing."