A little girl from Detroit, Michigan, was inspired to dress up as US track and field star Sha’Carri Richardson after she saw the athlete on the news.

The 21-year-old sprinter placed last in the 100 meters race at the 46th Prefontaine Classic Saturday. It marked her first race since a positive marijuana test resulted in a 30-day suspension.

"This is one race," Richardson said in a post-race interview. "I’m not done. You know what I’m capable of. Count me out if you want to. Talk all the [expletive] you want because I’m here to stay. I’m not done. I’m the sixth-fastest woman in this game ever, and can’t nobody ever take that from me."

Richardson finished Saturday’s race with a time of 11.14. Jamaican sprinters Elaine Thompson-Herah, Shelly-Ann Fraser-Pryce and Shericka Jackson, swept the Olympic podium in the women’s 100-meter run, finished in the same order on Saturday.

Elaine Thompson-Herah broke her Olympic record with a time of 10.54, cementing her claim on the title of the fastest woman on the planet. Fraser-Pryce finished second at 10.73 and Jackson matched her Olympic time at 10.76. 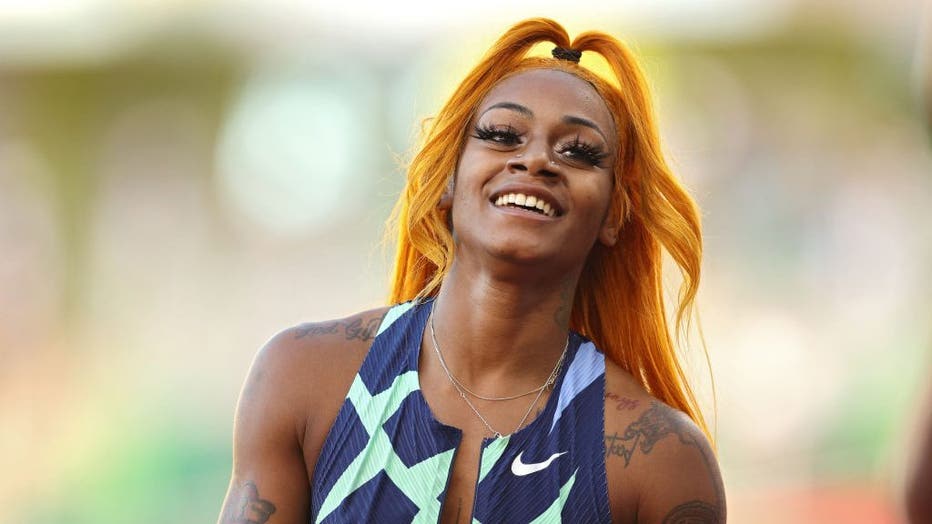 Sha'Carri Richardson looks on after winning the Women's 100 Meter final on day 2 of the 2020 U.S. Olympic Track & Field Team Trials at Hayward Field on June 19, 2021, in Eugene, Oregon. (Photo by Patrick Smith/Getty Images)

Richardson was slated to take part in the 200-meter run later Saturday afternoon but appeared to pull out. Her name was not among those in the final time report.

In that event, she would have shared the track with track legend Allyson Felix, who became the most decorated sprinter in Olympic history earlier this month when she picked up her 11th medal.