Members and the coach of the U.S. Women's National Team defended their 13-0 win over Thailand during the Women's World Cup in France after people condemned the team on social media.

LOS ANGELES  - After the USWNT defeated Thailand with a record-breaking 13-0 win in the Women’s World Cup, the team faced criticism for the crushing defeat.

Some people, including Canadian broadcasters, took to social media to condemn Team USA for celebrating after every goal. Kaylyn Kyle, a Canadian sportscaster and former Canadian team player, said it seemed “excessive and disrespectful” for the team to continue celebrating after reaching eight goals.

While Kyle agreed that the team should “score as many goals as you can in a World Cup,” others thought scoring 13 goals was too much.

“It was tough for me to watch some of the U.S. goal celebrations - which have come under criticism - considering the scoreline,” she wrote. “You do want the game to be celebrated and you do want to see players having fun but at the same time I thought some of the celebrations were a little overboard.”

She added that a few seemed “planned out” and offered insight into how Thailand's goalkeeper must feel after 13 goals got past her.

“I would love to give some advice on how to deal with it but really you just have to suffer. Struggle helps us grow in life and soccer is similar,” she said.

In the end, Solo said despite the team's major win, the question of whether USWNT has a sound defense when they're up against stronger teams remains.

Alex Morgan, who scored five goals during the match, eventually responded to the criticism and said “every goal counts.” Morgan continued her defense of the game, saying it was important to keep scoring in case goal differentials came into play in the group stage. 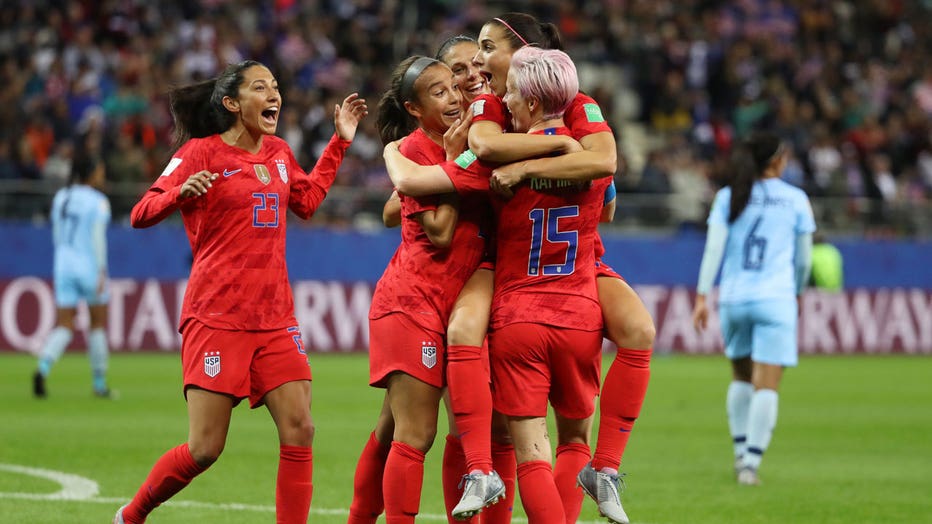 USWNT players hug after scoring another goal during their match with Thailand at the Women's World Cup in France on June 11, 2019. (Photo by Robert Cianflone/Getty Images)

After the match, the Thailand players were in tears, but Morgan and Carli Lloyd went and comforted some of those players. Solo called these moments classy in her op-ed and said these were a “far better expression of what the U.S. team are about.”

Coach Jill Ellis said her team showed Thailand respect and wondered if a 10-0 victory in a men’s World Cup would spark the same reactions.

"This is a world championship, so every team here has been fantastic to get to this point. And I think that to be respectful to opponents is to play hard against opponents, and as Alex said, it's a tournament where goal differential is important," Ellis said.

Thailand’s coach Nuengrutai Srathongvian said the team was disappointed because they wanted to make an impression in their first match, but added the team will be fine.

"Yes, they are all athletes and they will be resilient. We've got two more games to play and we need to bounce back," Srathongvian said through a translator.

Srathongvian said soccer in Thailand is still growing and there is a limited pool of players to draw from.

The World Cup comes at a time when female players across the globe are seeking better treatment, conditions and pay. Many teams, such as Jamaica and Thailand, receive funding from private benefactors.

The U.S. national team has long championed equal rights, and players collectively filed a lawsuit earlier this year that alleges discrimination by the U.S. Soccer Federation and are seeking pay equitable with that of the men's national team.

The players say the lawsuit is on hold while they're in France.

After Thailand’s defeat, people also took to Twitter and said the victory is another reason for USWNT to receive equal pay.

During the match, not only did the team break the record for the most lopsided victory in the history of the Women’s World Cup, but Morgan tied the single-game record set by Michelle Akers in 1991.

USWNT plays against Chile – who are also making their World Cup debut – on June 16.