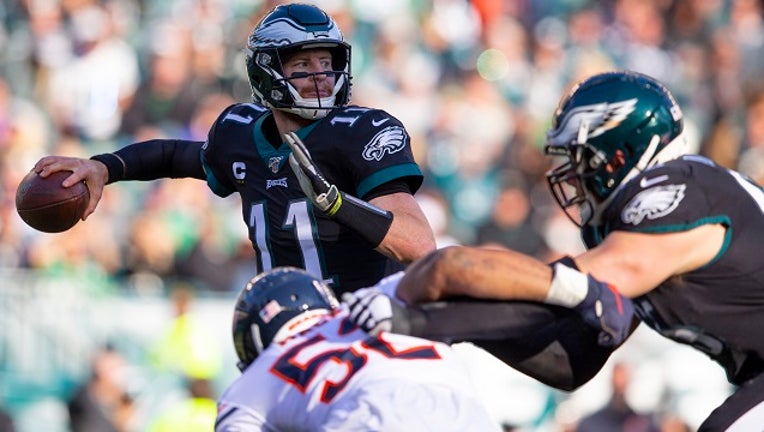 PHILADELPHIA, PA - NOVEMBER 03: Carson Wentz #11 of the Philadelphia Eagles throws a pass against the Chicago Bears in the third quarter at Lincoln Financial Field on November 3, 2019 in Philadelphia, Pennsylvania. (Photo by Mitchell Leff/Getty Image

PHILADELPHIA - Carson Wentz threw for 239 yards and one touchdown, Jordan Howard ran for 82 yards and a score and the Philadelphia Eagles held on for a 22-14 victory over the Chicago Bears on Sunday.

The Bears had just 9 yards in the first half and trailed 19-0 before David Montgomery had a pair of 1-yard TD runs to make it a one-possession game in the fourth quarter.

But Philadelphia put it away with 16-play, 69-yard drive capped by Jake Elliott's 38-yard field goal. Wentz completed all four of his third-down passes on the drive for first downs.

The Eagles (5-4) have won two in a row after a pair of lopsided losses.

The Bears (3-5) have lost four straight.

Mitchell Trubisky was 10 of 21 for 125 yards and was sacked three times.

The Bears went three-and-out on their first five possessions, gaining minus-10 yards. They didn't get a first down until the final minute of the first half.

Wentz connected with Zach Ertz over the middle for a 25-yard touchdown pass to give the Eagles a 12-0 lead in the second quarter. Elliott missed the extra point wide right.

Howard ran up the middle 13 yards for a TD on the opening drive of the third quarter, extending the lead to 19-0.

The Bears finally got going when Trubisky connected with Taylor Gabriel on a 53-yard pass to the Eagles 9 and Montgomery ran in from the 1. He leaped in from the 1 early in the fourth quarter.

But Chicago couldn't complete the comeback.

The Eagles had a first down at the Bears 5 on their opening drive, but settled for a 28-yard field goal by Elliott after Eddie Goldman sacked Wentz.

Elliott kicked another 28-yarder on the next drive to make it 6-0.

Howard averaged 4.3 yards per carry in his first game against his former team. Jeffery had four receptions for 36 yards and at least two drops.

Eagles cornerback Sidney Jones, a second-round pick in 2017, didn't dress. Jones was projected to be a first-round pick before tearing his Achilles on his pro day. He has failed to live up to expectations in his two-plus seasons.

Eagles: WR DeSean Jackson lasted just one series after returning to the lineup for the first time since suffering an abdomen injury in Week 2. He drew a pass interference on the first play and had a 5-yard catch. ... LT Jason Peters (knee) and LB Nigel Bradham each missed their third straight game.