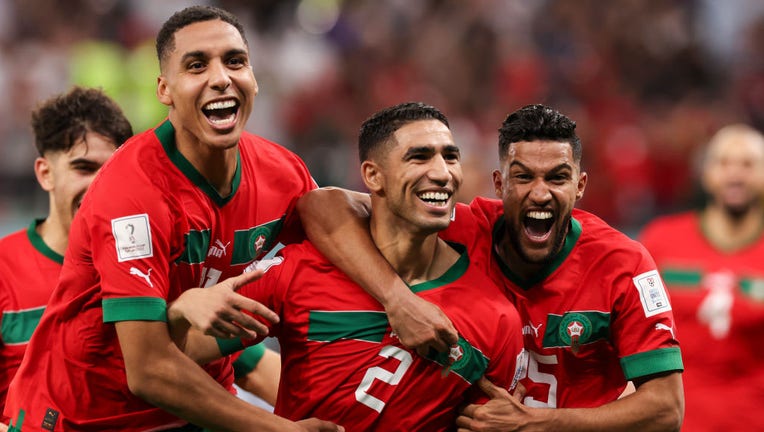 Achraf Hakimi of Morocco celebrates after scoring the winning penalty as Morocco defeats Spain on penalties during the FIFA World Cup Qatar 2022 Round of 16 match between Morocco and Spain at Education City Stadium on Dec. 6, 2022, in Al Rayyan, Qata

DOHA, Qatar - Morocco became the first Arab nation to advance to the World Cup quarterfinals, beating Spain 3-0 in a penalty shootout on Tuesday.

Pablo Sarabia, Carlos Soler and Sergio Busquets missed their penalties for Spain, with Sarabia hitting the post and Morocco goalkeeper Yassine Bounou stopping the other two.

The teams drew 0-0 in regulation and extra time.

Morocco has been the biggest surprise of the tournament and will next face either Portugal or Switzerland.

Morocco is also the only team from outside Europe or South America to make it to the last eight. The team made the round of 16 once before, at the 1986 World Cup in Mexico.

Spain was eliminated by host Russia in a penalty shootout at the 2018 World Cup, and by Italy in the semifinals of last year's European Championship.

It was the fifth straight-time Spain played extra time in a knockout round of a major tournament. The team played 120 minutes against Russia and in all three of its knockout games at Euro 2020.

History of the World Cup

How the World Cup became the world's most popular sporting event.

Moroccan fans significantly outnumbered — and were louder — than the Spaniards at Education City Stadium.

Morocco and Spain are close neighbors with a complex geopolitical relationship. 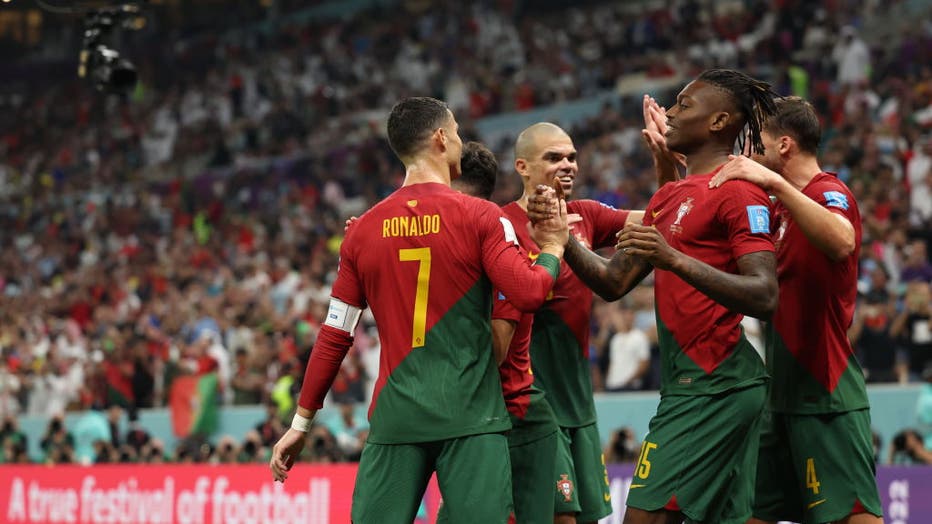 Rafael Leao of Portugal celebrates after scoring a goal to make it 6-1 with Cristiano Ronaldo, Pepe and Ruben Dias of Portugal during the FIFA World Cup Qatar 2022 Round of 16 match between Portugal and Switzerland at Lusail Stadium on December 6, 20

With Cristiano Ronaldo on the bench, the superstar striker’s replacement scored a hat trick to lead Portugal over Switzerland 6-1 and into the World Cup quarterfinals on Tuesday.

Goncalo Ramos, a 21-year-old forward who only made his Portugal debut last month, made his first start for his country and demonstrated the kind of clinical finishing Ronaldo was once known for.

Ramos scored the opening goal in the 17th minute and added others in the 51st and 67th — by which time chants of "RONALDO! RONALDO!" were swirling around the 89,000-seat Lusail Stadium.

Ronaldo entered as a substitute in the 72nd minute to loud cheers, though Portugal had the game wrapped up by then with defenders Pepe and Raphael Guerreiro also scoring. Rafael Leao added a late goal in stoppage time.

Portugal advanced to the quarterfinals for the third time, after 1966 and 2006, and will play Morocco on Saturday.

Portugal coach Fernando Santos now has to decide whether to stick with Ramos or restore Ronaldo, the top scorer in men’s international soccer and one of the game’s greatest ever players.

For USA, the focus now shifts to 2026 World Cup