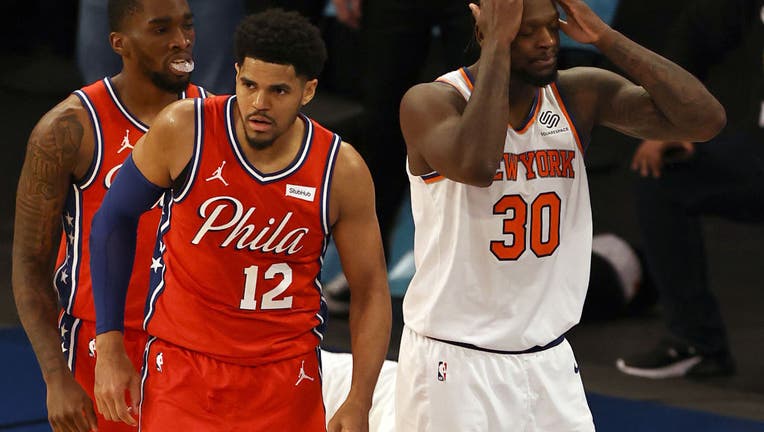 NEW YORK, NEW YORK - MARCH 21: Julius Randle #30 of the New York Knicks reacts after he is called for fouling Tobias Harris #12 of the Philadelphia 76ers in the final seconds of overtime at Madison Square Garden on March 21, 2021 in New York City.Har

PHILADELPHIA - Tobias Harris made two free throws with 5.3 seconds left in overtime and the Philadelphia 76ers ran their winning streak against the New York Knicks to 15 games with a 101-100 victory Sunday night.

Philadelphia improved to 30-13 with its eighth win in its last 10 games.

Julius Randle scored 24 points but his last shot rimmed out just before the buzzer as New York dropped to 21-22.

The final meeting of the three-game season series and second in five days between the Atlantic Division rivals was a defensive struggle the whole way.

Danny Green hit a couple 3-pointers to give Philadelphia a 96-93 lead in overtime, but Alec Burks and Barrett had baskets before Reggie Bullock’s 3 as the shot clock expired gave the Knicks a 100-96 lead.

Harris made a 3 and Randle was called for his fourth foul as Harris attempted to grab Shake Milton’s misfire. Knicks coach Tom Thibodeau appeared to be trying to challenge the call, but there was no review and Harris made both free throws to put Philadelphia up one.

Crew chief Courtney Kirkland said Thibodeau did not signal his request for a challenge quickly enough after calling a timeout.

"After all the fouling and everything that was going on, for (the referees) to call that and decide the game is ... ridiculous," Randle said. "They have to do a better job. It’s too many games like this."

Green connected on a floater in the lane to push the advantage to 88-85 late in regulation. On the ensuing possession, Randle missed a layup and Harris grabbed the rebound. But he missed both free throws and Dwight Howard could not corral the loose ball, giving the Knicks one last chance.

"The first two free throws I got in the fourth quarter I really couldn't feel my hand going to the line and shooting them because of the foul," Harris said. "And I missed two in a row so that was a tough one."

The Knicks took advantage as Randle knocked down a right corner 3 with Harris draped all over him to tie the game at 88. After a timeout, Randle stole Ben Simmons' pass and raced up court, but his 3-pointer missed badly.

76ers: Philadelphia entered the game with the best record in the Eastern Conference and the second-best record in the NBA, so coach Doc Rivers does not think there is much the front office can do to improve the 76ers before Thursday's trade deadline. In fact, Rivers believes the best move the Sixers could make is getting star center Joel Embiid back from a bone bruise in his left knee, suffered in a 127-100 win over the Washington Wizards on March 12. "If we make a move, great. If we don’t, we love our team," Rivers said before the game. "There’s no move we can make more important than getting Joel back out there."

Knicks: The short-handed Knicks received help in the returns of Immanuel Quickley and center Mitchell Robinson, both of whom played against Philadelphia. Robinson had missed 15 games with a broken hand and Quickley sat out New York’s 94-93 win over Orlando Thursday night with a sore left ankle. The Knicks did not have starting point guard Elfrid Payton, who missed his fifth straight game with a strained right hamstring, and reserve guards Austin Rivers (personal) and Derrick Rose (health and safety protocols). Thibodeau said Robinson, normally New York’s starting center, would "probably come off the bench initially and then we’ll see where that goes. Eventually he’ll be back starting."

76ers: Play the second game of their six-game road trip on Tuesday at Golden State.

Knicks: Host Washington on Tuesday night in the first half of a two-game series between the teams.