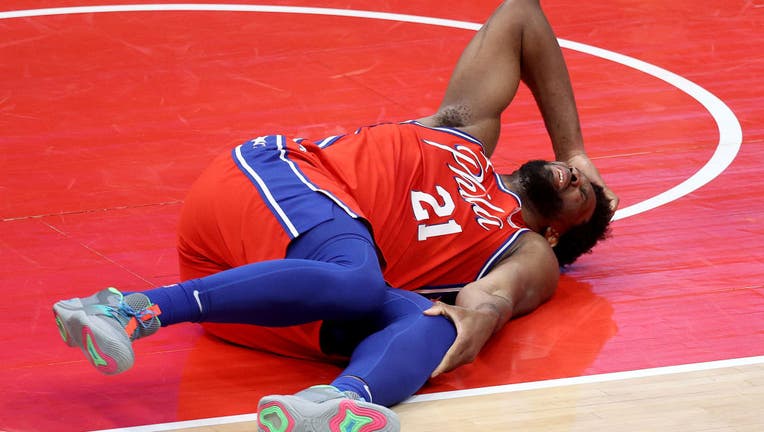 WASHINGTON, DC - MARCH 12: Joel Embiid #21 of the Philadelphia 76ers reacts after getting injured in the second half against the Washington Wizards at Capital One Arena on March 12, 2021 in Washington, DC. DC. NOTE TO USER: User expressly acknowledge

PHILADELPHIA - Philadelphia 76ers star center Joel Embiid has a bone bruise on his left knee and will miss an undermined amount of time, according to a person with knowledge of the injury.

Embiid did not suffer any structural damage to his knee. The person spoke on condition of anonymity Saturday because the severity of the injury had not been announced.

Embiid was injured in the Sixers' win Friday over Washington. Embiid landed awkwardly after a dunk on his left leg , his knee joint appearing to bend slightly forward. He writhed in pain on the floor for several minutes, and a stretcher was briefly brought onto the court, but the center eventually limped off under his own power.

Embiid had emerged as an MVP candidate for his role on the Eastern Conference-leading Sixers. He's averaging 29.9 points and 11.5 rebounds in 31 games.