White House Press Sec. Jen Psaki said that the Biden administration is looking at every tool in its arsenal to address the increased prices of gas across the country noting the FTC's crackdown on illegal price-gouging as well as conversations with OPEC to increase supply.

Ahead of the Thanksgiving travel season, gas prices have reached staggering highs with most states averaging $3.42 per gallon for regular gas, according to AAA.

California topped the list of states with the highest gas price averages at $4.68 per gallon for regular gas as of Friday.

Meanwhile, during Friday’s White House press briefing, press secretary Jen Psaki noted that the Biden administration is "looking at every tool" in their arsenal to combat the skyrocketing prices of gas.

"The message to Americans is that we’re not just closely and directly monitoring the situation, but we’re looking at every tool in our arsenal, you mentioned some of them, while I don’t have anything to preview today, the president is quite focused on this as is the economic team and I would note again that we’ve taken a range of actions. We communicated with the FTC to crack down on illegal pricing, engaging with countries and entities abroad like OPEC on increasing supply and we’re looking at a range of options we have at our disposal," Psaki said. 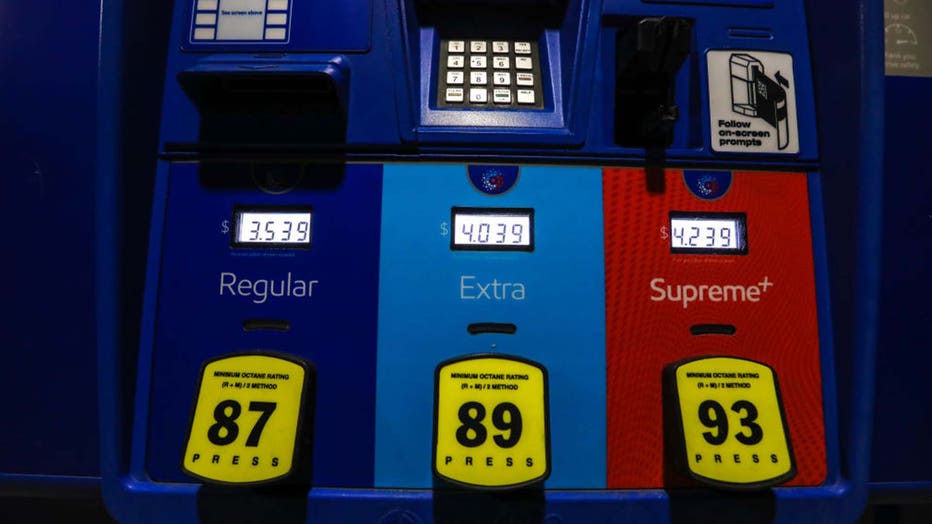 FILE - A view of a fuel pump at a petrol station shows gas prices over $4.

President Joe Biden on Wednesday said he instructed his top economic aides to focus on reducing energy costs, which he blamed for accelerating inflation after the government reported that consumer prices jumped 6.2% in October from the previous year. It marked the steepest increase since December 1990.

"Inflation hurts Americans’ pocketbooks, and reversing this trend is a top priority for me," Biden said in a statement.

Energy costs played a large role in the inflation surge, skyrocketing 4.8% from September to October, with price increases widespread across the sector. The cost for gasoline (6.1%), heating oil (12.3%) and natural gas (6.2%) all jumped last month from September, largely due to severely lopsided supply and demand: Americans are traveling more, but the supply side has not kept up with the demand.

In the past year, energy costs have jumped a stunning 30%, with gasoline soaring by nearly 50%.

Psaki's remarks come just days after Energy Secretary Jennifer Granholm suggested that Biden could take action as soon as this week on measures to address the rising cost of gasoline – something that looks increasingly unlikely to happen.

"Hopefully there will be an announcement or so this week," Granholm said on Monday.

Also on Monday, 11 Democratic senators asked Biden to tap into the Strategic Petroleum Reserve to help lower gas prices, rely less on foreign energy sources and build up the United States’ energy independence, according to a letter sent to the president.

"In our home states, high gasoline prices have placed an undue burden on families and small businesses trying to make ends meet, and have proven especially burdensome as our constituents continue to recover from the economic fallout of the COVID-19 pandemic," the senators wrote.

RELATED: US consumer prices jumped 6.2% in past year, highest inflation rate since 1990

The Strategic Petroleum Reserve (SPR) is the world's largest supply of emergency crude oil, according to the SPR website.

"It was established primarily to reduce the impact of disruptions in supplies of petroleum products and to carry out obligations of the United States under the international energy program," the website continued.

The oil is stored in underground salt caverns at four different sites along the coastline of the Gulf of Mexico. Altogether, the SPR can hold 714 million barrels of oil.

An emergency withdrawal from the SPR has only happened three times in its history, according to the website. The first time was in 1991 during President George H. W. Bush’s administration during Operation Desert Storm. The second time was in 2005 during President George W. Bush’s administration after Hurricane Katrina hit, which caused massive damage to oil production facilities, terminals, pipelines, and refineries. The third and most recent emergency withdrawal happened in 2011 to respond to the loss of crude oil due to supply disruptions in Libya and other countries.

While drivers can’t do much about the cost of gas at the pump, there are still things that they can do to reduce the amount of money they have to spend on gas.

According to Energy.gov, there are several ways to reduce the amount of gas that a car uses. The first thing drivers can do is to avoid idling. If a vehicle is parked in a location for more than 10 seconds, the driver should consider turning the engine off. Also, during the winter months, let the engine warm up a bit and start driving gently.

Aggressive driving, such as rapid acceleration and hard braking, can lower highway gas mileage by 15-30%. In general, driving at high speeds (anything over 50 mph) can reduce gas mileage.

Families going on long trips may try to avoid placing items on roof racks, if possible. This can reduce the vehicle’s drag. Also, avoid packing heavy items in a car, as the added weight will make the car work harder, reducing the gas mileage. Of course, these steps may not always be possible for some travelers.