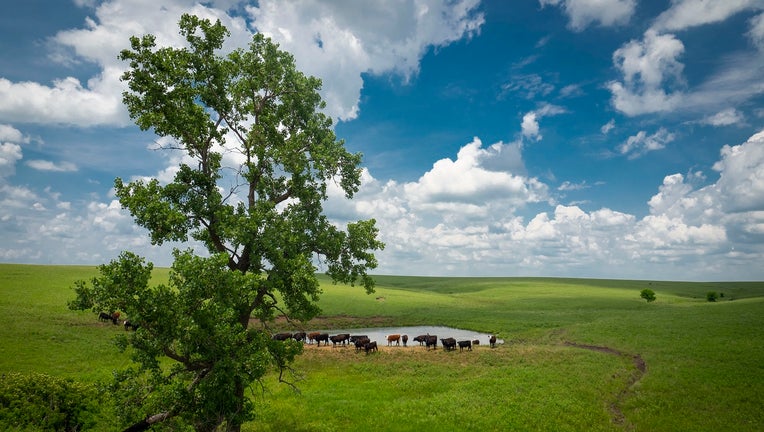 Democratic presidential candidate Joe Biden is pitching a $5 trillion-plus climate proposal that he says would lead the U.S. to net zero emission of carbon pollution by 2050.

Biden's plan calls for $1.7 trillion in federal spending over 10 years, with the rest of the investments coming from the private sector. Biden, who discusses the plan in a video posted online, proposes covering the taxpayer costs by repealing the corporate tax cuts that President Donald Trump signed in 2017, while eliminating existing subsidies to the fossil fuel industry.

"Science tells us that how we act or fail to act in the next 12 years will determine the very livability of our planet," Biden said in a statement ahead of the plan's unveiling Tuesday. "That's why I'm calling for a clean energy revolution to confront this crisis and do what America does best - solve big problems with big ideas."

Biden, who announced his candidacy in April and is the clear leader in recent national and early-state primary polls, is offering his climate plan as some of his rivals suggest the 76-year-old former vice president is not bold enough. Massachusetts Sen. Elizabeth Warren said last weekend at the California Democratic Convention that "some Democrats in Washington believe the only changes we can get are tweaks and nudges." She added: "If they dream at all, they dream small."

The former vice president's outline tracks some ideas of the Green New Deal pushed by many Democrats in Washington, though Biden isn't as aggressive in his timeline for curbing emissions.

Biden's outline is similar in size and scope to what former Texas Rep. Beto O'Rourke has proposed. Biden falls short of Washington Gov. Jay Inslee's pitch for $3 trillion in federal spending over a decade, which Inslee says will spur $6 trillion more in private investment.

Biden's plan hinges on tax breaks, direct spending and federal regulatory power. He'd start with reversing many actions of the Trump administration, which itself sought to roll back a range of Obama administration efforts on energy and the environment. Biden would add an aggressive push on the world stage, using U.S. political and economic muscle to limit emissions from other nations, including China.

He acknowledges how such an overhaul would affect existing U.S. energy market workers, coal miners and power plant operators especially. He calls first for pension and benefit protections for all such workers; and, though short on specifics, he promises an "unprecedented investment" in retraining and redevelopment programs for those communities.

He doesn't offer specific spending amounts for those priorities.

Still, Biden's dual focus on coal towns and nonwhite communities reflects political lessons from Democrats' 2016 loss. Democratic presidential nominee Hillary Clinton drew ire in coal country when she said as part of a more sweeping statement on energy development that "we're going to put a lot of coal miners and coal companies out of business." Meanwhile, Democratic turnout dropped in some cities with high nonwhite populations, places where aging infrastructure has become a defining issue.

Biden envisions expanding the nation's railways, with massive growth that theoretically would reduce car demand. He promises to complete the California High Speed Rail project; shrink by half the current travel time from Washington, D.C., to New York; and extend the existing Northeast Corridor into the South. That, along with new lines in the West and Midwest, would mean "an end-to-end ... system that will connect the coasts, unlocking new, affordable access for every American."

Among his ideas for automobiles, he calls for fuel economy standards "beyond" the Obama administration's goal of about 54 miles (87 kilometers) per gallon (3.8 liters). The Trump administration has rolled that back, saying the regulation would increase consumers' purchase prices of cars.

Biden also pitches expanded tax credits for purchases of electric vehicles, along with 500,000 more public charging stations nationwide by the end of 2030.

He calls for reducing carbon output from the nation's buildings by more than 50 percent by 2035, through both new construction and tax breaks for retrofits for existing commercial and residential properties. The Energy Department would be tasked with tightening efficiency standards for household appliances and equipment.

Like O'Rourke, Biden specifically mentions nuclear energy as a source the federal government should boost with tax incentives. That could put him at odds with some activists on the left who cast nuclear energy as too dangerous.

O'Rourke has not ruled out nuclear energy, as well. Inslee's policy proposals sidestep nuclear energy altogether, with aides suggesting he wouldn't oppose market-backed nuclear power but wouldn't subsidize it as part of a national mobilization.

On the international front, Biden calls out China as the world's biggest coal polluter and says he'd make all future bilateral deals with Beijing contingent on carbon reductions. Biden also urges an international alliance that would help other nations afford low-carbon development and pitches a global moratorium on offshore drilling in the Arctic.