TAMPA, Fla. - The B-1B bomber sits sleek and lethal on the flight line at MacDill Air Force Base in Tampa, ready for its unusual mission this weekend.

"Why do I like to fly it? Because it goes fast and it looks cool," offered Capt. Richard Davison, one of the U.S. Air Force pilots who will be key players in the Super Bowl flyover Sunday.

Davison will meet up over the Gulf of Mexico with two other bombers, a B-52 and a B-2 stealth bomber, prior to the flyover, and then fly at 1,000 feet at 300 mph to arrive over the stadium on the last note of the Star Spangled Banner. 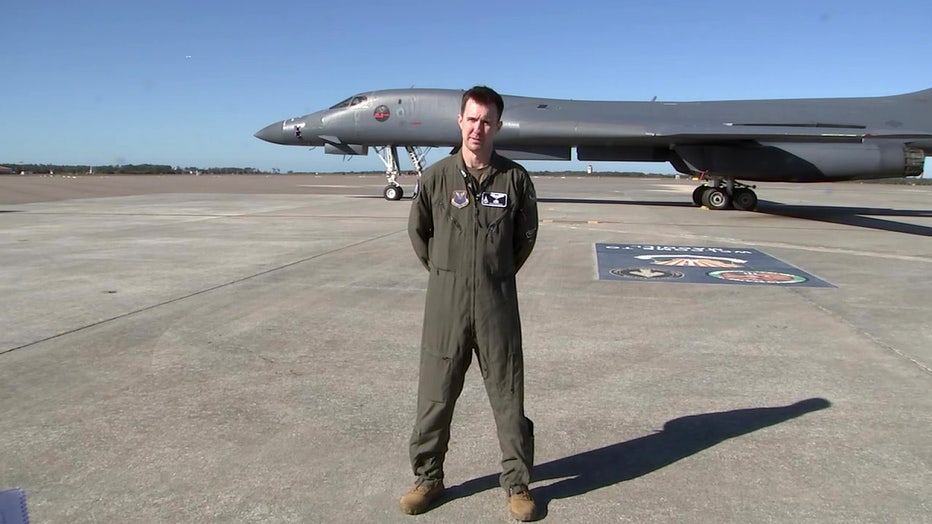 "That type of precise timing is what we practice every single time. That’s our job," explained Maj. Anthony Mascaro, who has flown both the B-52 and the B-2.

"I don’t think it gets any easier, it’s a stressful mission," he said.

Captain Sarah Kociuba has a pretty impressive resume. She’s a B-2 instructor pilot, has flown more than 90 combat missions, and has more than 1,700 flying hours in five different aircraft.

Mcalear arrived from Washington Tuesday night. Sunday he will stand at the very top of Raymond James Stadium, the site of Super Bowl LV.

"Using our radios, needing line of site, needing to be close, to talk to both people at once, that’s why I’ll be on top of the stadium," explained Mcalear, who plans to hold a walk-through and a dress rehearsal before Sunday.

He says even the speed at which musicians perform the anthem can affect the timing of the flyover.

"I just hope that everybody sees that their nation’s Air Force is the best air force in the world, and really feel that sense of pride to be American," McAlear added.

While in the area, the three bombers will fly aerial refueling training with the KC-135 tankers based at MacDill.