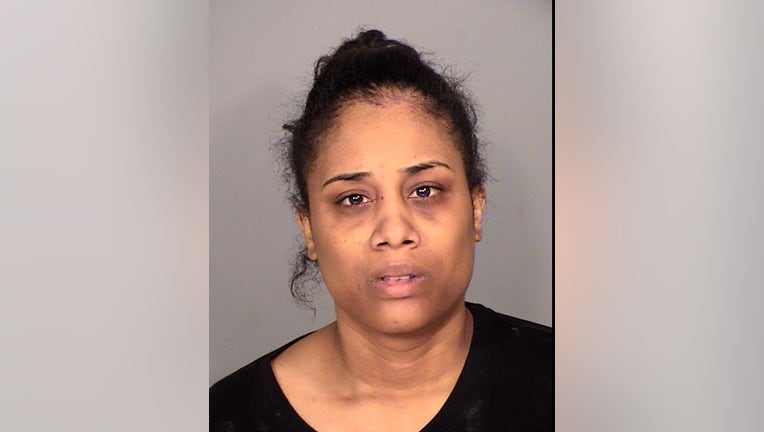 Itayvia Lloyd is charged with assaulting a police officer. She was arrested after admitting to police she threw her son off a fourth floor balcony. More charges are expected later today. (Ramsey County Jail)

ST. PAUL, Minn. (FOX 9) - A 33-year-old woman accused of throwing her 11-year-old son from a fourth floor balcony in St. Paul Monday is now charged with attempted murder. She is also charged with assaulting a police officer while she was being taken into custody.

Itayvia Lloyd is charged with one count of second-degree attempted murder along with two counts of fourth-degree assault of a police officer.

At about 8 a.m. Monday, police responded to a call on the 700 block of Hampden Avenue where the caller reported seeing a child falling from the fourth floor balcony. The boy is in serious condition after suffering at least one broken femur, a fractured jaw and head injuries.

Boy injured after being thrown from balcony in St. Paul

An 11-year-old boy is in serious condition after his mother pulled him out of bed and threw him off the balcony of their fourth floor apartment in St. Paul, Minnesota Monday morning.

According to the criminal complaint, when police entered the apartment, Lloyd was naked in a bath tub. She did not respond when she was told that her son was bleeding and had a broken leg. Eventually, Lloyd got out of the tub, and when told she was under arrest, she called the officer "Ellie," and referred to her as her ex-girlfriend.

Meanwhile, another officer at the scene spoke with Lloyd's 6-year-old son. He said Lloyd and his stepmother were fighting, which scared him. The boy then saw Lloyd take the 11-year-old off the top of their bunkbed and throw him off the balcony. During an interview, Lloyd's 6-year-old son said he awoke to his brother laughing, and Lloyd said, "This is not a joke--stop laughing." She then reportedly took the 11-year-old into the living room. When the 6-year-old asked where his brother was, Lloyd said she threw him over the balcony.

When Lloyd was taken into custody, an officer approached Lloyd on her left side and told her to put her hands behind her back. As the officer grabbed her left arm, Lloyd "pulled away, cocked her right arm and threw a punch" at the officer. The officer blocked the punch with her hand, and Lloyd was placed in handcuffs.

Lloyd was taken to a holding cell where officers say she appeared agitated. An officer "stayed with her to try to keep her calm," but Lloyd stood up, approached the officer and spat on his face.

According to the complaint, while in custody, Lloyd "spoke of people who had been after her for a couple of years." When asked about the balcony incident, Lloyd said she didn't remember because she had been smoking marijuana. When asked what time she had gotten up, she said she didn't remember and that her son "was on the top bunk playing around as usual, but this morning I threw that kid off the balcony. He really fell. For real."

Lloyd then spoke incoherently, ripped papers off the table and yelled at investigators. When asked to explain what happened, she began undressing and exposing herself. The interview was then terminated.

Police also spoke to Lloyd's partner, who said she has been in a relationship with Lloyd for three years. She said the 11-year-old boy has autism and only uses the words "yes" and "no" to communicate. She said that Lloyd had been "out of her mind" and not acting like her usual self. She said that, on Monday morning, she left the apartment to go to the vending machine. When she returned, she didn't see the 11-year-old boy, so she began looking for him and found him on the ground outside. She waited with him until medics took him away. She denied that she and Lloyd had been arguing that morning.

On Tuesday, Lloyd agreed to speak with police again. She told officers that she had gone to a memorial party for a relative over the weekend and that she didn't recall much of Sunday or Monday. She said she had been struggling with drinking and had been under a lot of stress.

When asked about Monday's incident, Lloyd said she remembered going into her son's room and said that she could have pushed him off the balcony, but she wasn't in her right state of mind.

According to the complaint, Lloyd then said, "I thought my baby was dead," and said that she had "snapped." She said she was mad about a fight she had with her partner and, at the time, her rage was so intense that she wanted her son dead.

Officers asked Lloyd about the difficulties of raising a child with disabilities, and she said it is very difficult to raise him on her own. Lloyd said that she had at one time thought that because of her son's medical issues, she worried about his future and "wished heaven was his home." When asked if it was accurate to say she let her rage out on her son because of his disabilities, she said yes.

When asked if she was trying to kill him, Lloyd said, "yes, but I want my baby here."