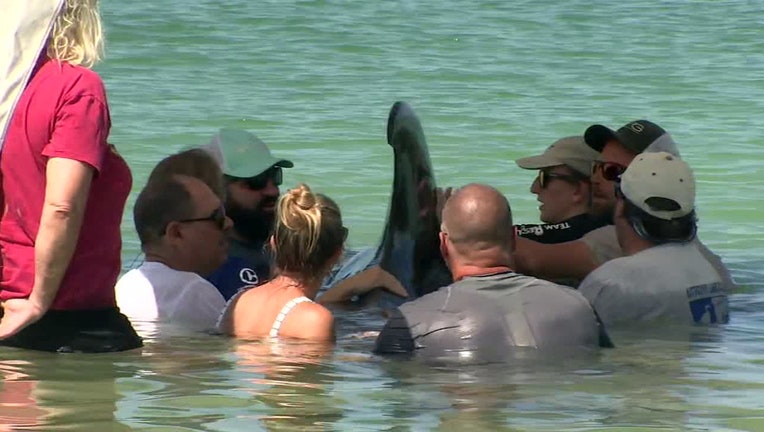 REDINGTON BEACH, Fla. - Experts think they now have a plan to save five distressed whales who beached themselves along Redington Beach this morning, drawing a crowd to the unusual sight.

The scene is in the area of 162nd Avenue. Crews set up multiple tents on the beach and in the shallow water while biologists and others work on the whales. Pinellas deputies, FWC, and the Clearwater Marine Aquarium are among those assisting.

“We prioritize the animals over anything else, so that’s why you see the tents, to avoid the animals getting sunburned. We’re continuing to splash water on them and check their vitals. We check every time they take a breath. We just want to make sure they are as comfortable as possible,” Clearwater Marine Aquarium spokesperson Carlee Wendell explained.

CMA biologists say the animals appear to be pilot whales. 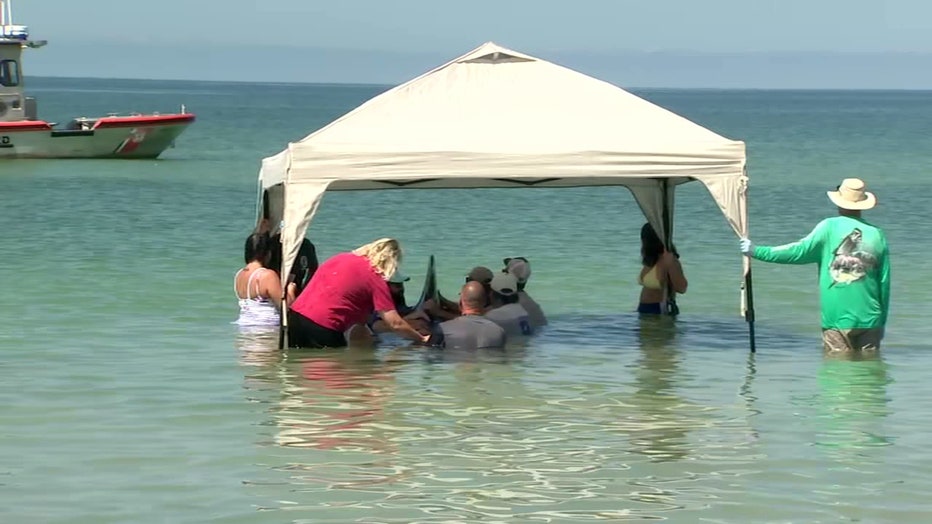 Short-finned pilot whales are known to live in tropical waters around the world. The whales typically spend a lot of time deep underwater, feeding on squid, but also on certain species of fish and octopus.

“These are deep-water animals, they can live over 150 miles from shore, so of course, they are very out of their environment,” added Wendell.

Experts had suspected that one or two of the whales was not well, but because they live in social groups, the others followed their ill friends to shore.

Now, rescuers will take the two ill whales to a rehab facility in Tarpon Springs, while trying to corral the other three back out to see.

Whale strandings are not common along Florida's gulf coast, but are not unprecedented. Last September, two pygmy killer whales died after stranding in Clearwater. Last fall, the state's red tide bloom -- which has since cleared -- also was blamed for the deaths of several dolphins, sea turtles, manatees, and birds.