Philadelphia Police Staff Inspector Joseph Bologna is facing charges for an incident involving a Temple student, according to prosecutors.

Police Staff Inspector Joseph Bologna also has been charged with reckless endangerment and possession of an instrument of crime.

Police Commissioner Danielle Outlaw had said earlier Friday that the officer had been taken off street duty during the investigation. 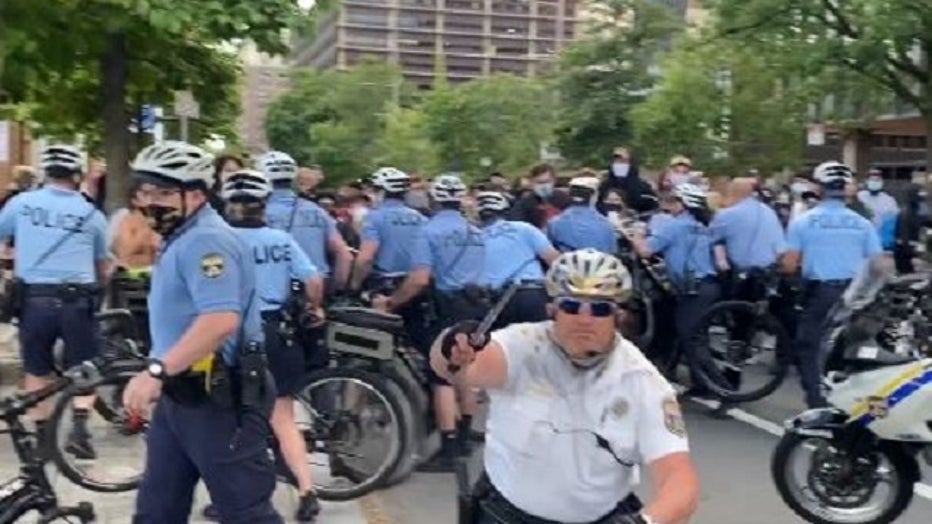 Video circulating widely on Twitter shows Bologna hitting a 21-year-old Temple University student in the head and neck area with a baton, before the student is knocked to the ground and another officer put his knee on him to keep him down.

The FOP released the following statement:

Jonathan Feinberg, an attorney representing the protester, Evan Gorski, said Friday that the engineering student was at home recovering from his injuries after being in custody for almost 40 hours earlier this week.

Gorski needed about 10 staples and 10 stitches to close his wound, Krasner’s office said.

Outlaw said her agency was reviewing videos that showed police officers in violent confrontations with people protesting the death of George Floyd.

Lawyers, protesters, legal observers and a handful of activist organizations have strongly criticized multiple instances of police use of force during the protests, many recorded by reporters or posted on social media. A confrontation Monday involving officers firing tear gas and rubber bullets at protesters who had gotten on to Interstate 676 and were trying to retreat up a steep embankment has drawn national attention.

Outlaw said she had seen several of the videos and while some of the use of force seemed to be within department policy, some were “disturbing.”

“I am deeply concerned about this, and as a result I have initiated several concurrent internal affairs investigations,” Outlaw said.

Prosecutors used the video of Bologna to decline charges against Gorski.

Feinberg said it was his understanding that Gorski was initially arrested Monday on allegations he had assaulted an officer and somehow injured him, but the district attorney’s office declined to file charges against him.

In one video, a group of protesters can be seen engaging with bicycle officers in a grassy area near the Benjamin Franklin Parkway on Monday night. It was unclear what caused the interaction to escalate, but Gorski is seen reaching out to separate another protester from the officer’s grip before he is struck.

"Today, I learned from Philadelphia District Attorney Larry Krasner that he has filed criminal charges against Staff Inspector Joseph Bologna, who is assigned to the Police Department’s Patrol Bureau. While I have not been made privy to the entirety of the information that led to Mr. Krasner’s decision to charge Staff Inspector Bologna today, I am aware that the charges stem from an incident involving the application of force, which occurred on Monday, June 1, approximately 5:30pm, in the area of 2400 Ben Franklin Parkway."

She added, "As I stated earlier today, an internal affairs investigation had already been initiated; and irrespective of the District Attorney’s prosecution, the internal affairs investigation will continue.As a Department, we do not condone the criminal acts of any person, and it is my sincere hope that the District Attorney does, in fact, hold all people who cause harm to others equally accountable.To be clear, the District Attorney’s decision to charge Staff Inspector Bologna does not diminish or detract from the efforts of our many officers who have worked tirelessly for extended hours and under tense and stressful conditions. These officers have demonstrated professionalism, dedication, and an unwavering commitment to our mission during tenuous and often volatile periods.As is always the case, throughout this protracted period of unrest, we will continue to vigorously uphold and support every person’s constitutionally protected freedom to peacefully assemble, and grieve governmental, societal and economic injustice."