A student in Havertown already has Halloween in the bag with his costume honoring Philly legend Rob Dunphy.

HAVERTOWN, Pa. - An 11-year-old boy may have already secured bragging rights for the best Halloween costume of 2019.

The Delaware County student, named Owen, is a fan of Philadelphia sports and — as a natural extension — Rob Dunphy, who became an instant Philly legend after going viral for his Phillie Phanatic belly button tattoo.

On Tuesday, Owen came face-to-face with Dunphy himself while dressed as the iconic Philadelphia figure for Halloween.

"Today I met one of my new best friends," Dunphy wrote on Instagram. "His name's Owen. And his costume's better than yours." 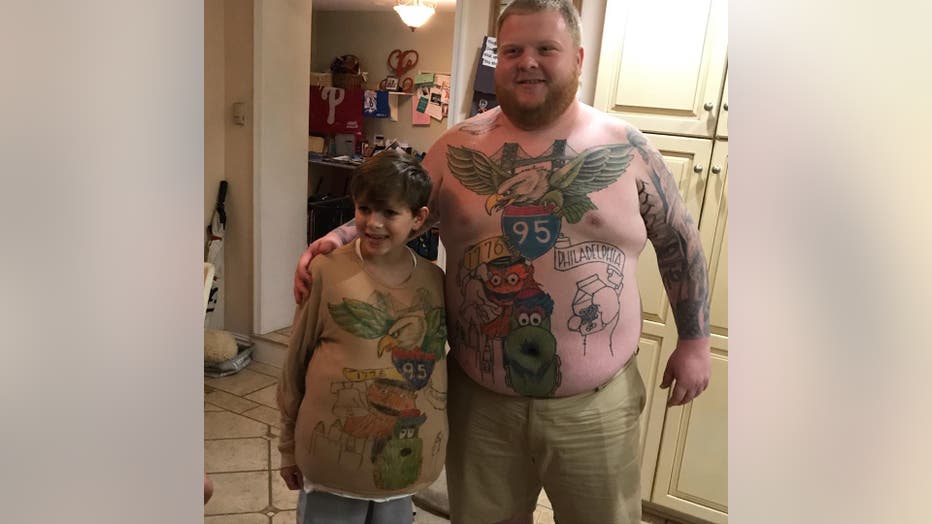 "Today I met one of my new best friends," Rob Dunphy wrote. "His name's Owen. And his costume's better than yours."

Dunphy says all of his Philadelphia-themed tattoos were outlined during a nearly seven-hour session. The tattoos include a large eagle, an I-95 sign, the Liberty Bell and a carton of Arctic Splash iced tea.

Prior to Tuesday's meet-and-greet, Dunphy visited the Good Day studio for some early morning shenanigans.