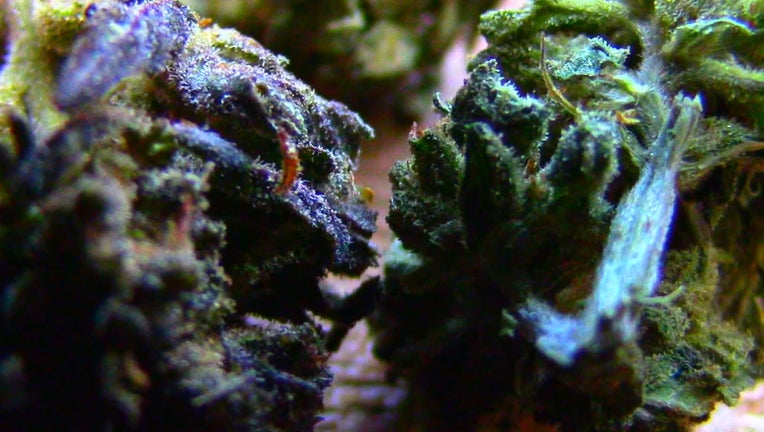 (FOX 9) - The newest cannabis product showed up in Twin Cities smoke and vape shops last fall and has been selling out fast.

Delta 8, known as 'weed light,' promises a milder high than marijuana, with less of the uncomfortable paranoia.

Why Delta 8 is known as Weed Light

The confusing legal status of Delta 8 may depend in large part on how it is made, where it is sold, and what health claims are made.

"I am almost sold out. People are coming in two, three, four at a time," one smoke shop clerk told an undercover producer for the FOX 9 Investigators.

"Half the strength of regular THC," promised another clerk.

Delta 8 is sold under several brand names and it comes in gummies, vape pens, or flower (bud). One clerk opened up a jar of flower inviting a producer to smell it. "Good stuff, huh?" he asked.

A half-dozen clerks selling the product assured an undercover producer it was also completely legal to sell in Minnesota.

'This is a nightmare'

But Delta 8’s confusing legal status may depend in large part on how it’s made, where it’s sold, and what health claims are made.

"For those of us who put our trust in evidence and evidence-based solutions, this is a nightmare," said Prof. George Weiblen of the University of Minnesota.

Marijuana and hemp also share many of the same chemicals, 144 cannabinoids, like CBD for what ails you and THC to get high.

Legally, and scientifically, the THC molecule the public is familiar with is formerly known as Delta 9-THC. But, there is a nearly identical molecule, found in much smaller quantities in both hemp and marijuana, called Delta 8-THC. Scientific research on Delta 8-THC is limited, but it is known to have some of the same intoxicating effects as Delta 9-THC - it is just less potent and the intoxicating effects don’t last as long.

In the case of Delta 8 flower, the synthesized chemical may actually be sprayed on the bud.

"Spiked weed, basically," said Weiblen, who believes from a botany perspective, the popularity of Delta 8 amounts to a kind of bait and switch.

The Agricultural Improvement Act of 2018, also known as the Farm Bill, legalized hemp and products made from it, as long as they do not contain more than .3% of Delta 9-THC. The Farm Bill does not specifically mention Delta 8-THC.

In other words, Delta 8-THC may be legal if extracted directly from hemp, but not if it's synthesized from CBD, through a process known as isomerization, even if that CBD was originally extracted from hemp.

"I think Congress is going to need to act and decide once and for all how to regulate the plant cannabis sativa in all of its forms and varieties," said Cody Wiberg, executive director of the Minnesota Board of Pharmacy.

Wiberg said state law is also confusing on this question. Minnesota statutes allow the sale of non-intoxicating cannabinoids from hemp. "The problem is Delta 8 is intoxicating," Wiberg said.

Another state law makes it illegal to sell a drug that is misbranded or not approved by the Food & Drug Administration (FDA).

When the FOX 9 Investigators went undercover many of the store clerks said Delta 8 was effective in controlling anxiety.

"All of that inflammation, anxiety, all of it," said one clerk. Another clerk said it was good for "pain relief in general."

The labels on most Delta 8 products say little or nothing about ingredients, dosage, potency, manufacturing, or side-effects. That may not be an oversight.

"If there is no advertising and nothing on the label, it is harder for regulators to prove intent," Wiberg said.

In Minnesota it is legal to manufacture and sell cannabis for an expanding list of approved medical conditions. But, some fear Delta 8 could harm the cannabis industry.

"I think it speaks to the state we’re in with COVID-19," said Dr. Stephen Dahmer, medical director for Green Goods, one of two licensed producers of medical cannabis in Minnesota.

"We are seeing skyrocketing mental health issues, and I think many of us are desperate to get advice where we can," Dr. Dahmer said.

Dr. Dahmer said consumers should be cautious about the reputed benefits of any one particular cannabinoid. He believes cannabis is most efficacious when all the cannabinoids are present and working together, what’s been called the "entourage" or "ensemble effect."

He also worries about contamination and solvents that might be in products that contain little to no information.

Close to the line

The FOX 9 Investigators decided to test two of the products, some Delta 8 flower (bud) and gummies.

Legend Diagnostics in St. Paul, which does lab testing for the Minnesota hemp industry, tested our products. Legend Diagnostics was able to test for both Delta 8-THC and Delta 9-THC, which many labs are not capable of distinguishing.

The flower was nearly 2 percent Delta 8-THC, indicating to Prof. Weiblin it was likely spiked with the chemical. It also contained a high level of CBD at 14 percent.

The flower was .28 percent of Delta 9-THC, a fraction under the .3 percent legal limit.

But it also contains .53 percent THCA, which when smoked converts to Delta 9-THC through a process known as decarboxylation. When combining Delta 9-THC and THCA, the flower would be .75 percent Delta 9-THC, exceeding the legal limit of .3 percent.

Under federal regulations, THC concentration is always measured after decarboxylation, referred to as "Total Potential THC," and includes Delta 9-THC plus THCA at a decarboxylation rate of .877.

The gummy contained .6 percent of Delta-8-THC and negligible quantities of Delta 9-THC, THCA, and CBD.

The labels for the products contain no information about the concentration of its ingredients.

As the Minnesota Legislature considers legalizing recreational cannabis, there is no indication Delta 8-THC is going away. And there may be other synthesized cannabinoids, isomers, and chemical analogues on the horizon.

Wiberg, from the Board of Pharmacy, believes consumers need something other than a confusing patchwork of federal and state laws.

"Will it (cannabis) be legal in all of its forms and varieties, or not? And then, how is it going to be regulated?" Wiberg asked.

"There needs to be some form of a national standard," Wiberg said.