COLUMBUS, Ohio (AP) - It was supposed to be a moment of triumph for Joe Biden.

The Democratic president had just signed into law the most significant infrastructure package in generations. And he had done it by bringing Democrats and Republicans together, just as he promised during last year's campaign. But when Biden arrived in New Hampshire last week to promote the $1 trillion package at the foot of a crumbling bridge, not all of his VIP guests were in the mood to celebrate.

"Democrats are concerned," former state House Speaker Steve Shurtleff, a longtime Biden supporter who attended the ceremony, told The Associated Press when asked about Biden’s political standing. "I’m concerned about where we may be in another couple of years when people really start to gear up and start making trips to New Hampshire."

Shurtleff was openly saying what a growing number of Democrats have been whispering for months: Biden's political standing is so weak less than a year into his presidency that he may not be able to win reelection in 2024 if he were to run again. Such anxiety-fueled parlor games are common among Washington's political class, but this one has spread to the states and constituencies that will play a central role in the next presidential election.

Vice President Kamala Harris is facing her own political conundrum with polls suggesting she may be less popular than her unpopular boss. A dynamic leader who made history by becoming the first Black woman and first person of South Asian descent to step into her office, Harris has been given few opportunities by the Biden White House to shine.

"In America, we have the courage to see beyond the crisis — to believe that the future and a future we imagine is possible — and then, to build it," Harris said to a smattering of polite applause in Columbus.

At least for now, there's little to suggest the legislation, which will strengthen infrastructure in every state and potentially create hundreds of thousands of jobs, will quickly improve Democrats' political standing.

As Biden struggles, speculation has intensified about the short list of would-be successors should Biden not seek reelection, although the 79-year-old president has said publicly and privately that he will. The list is led by Harris, of course, but includes other 2020 presidential candidates such as Transportation Secretary Pete Buttigieg and New Jersey Sen. Cory Booker. Just last week, Booker announced plans to appear at a party fundraiser next month in New Hampshire, which traditionally hosts the nation's first presidential primary election.

Booker's team sought to tamp down chatter that he was positioning himself to run in 2024, and allies say he is very close to Harris and would not challenge her in the event Biden retires. Still, the mere existence of such conversations so soon into a new presidency is unusual.

The frustrations boiling over now may be long forgotten by the time Biden — or another Democrat — leads the party in the 2024 presidential election. The truth is, no one knows what the standing of Biden or Harris will be next year, never mind in three years. While Biden's approval ratings are hovering in the low 40s, they are better than Donald Trump's at the same time of his presidency.

Barack Obama also faced headwinds at the end of the first year of his presidency. His party would go on to suffer historic losses in the 2010 midterm elections. But Obama recovered in time to win a second term. Bill Clinton similarly overcame setbacks, including a devastating midterm cycle in 1994, to win reelection in 1996. 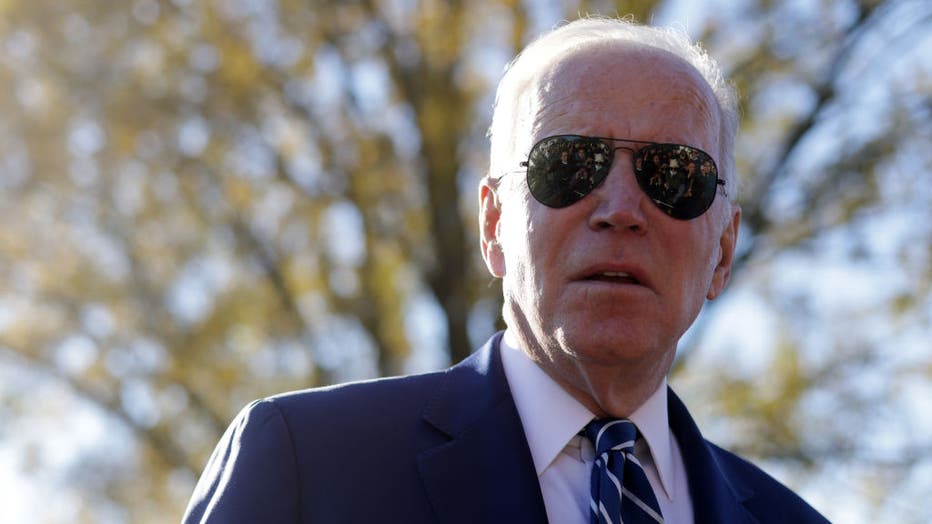 President Joe Biden speaks to members of the press after a Marine One arrival at the South Lawn of the White House November 19, 2021 in Washington, DC. President Biden returned from an annual physical check-up at Walter Reed National Military Medical

Democratic strategist Bill Burton, who worked in the Obama White House, noted that any number of factors could completely upend the political climate, such as Trump's reemergence, a Supreme Court decision ending or dramatically limiting abortion rights, an improving economy and the end of the pandemic.

"There’s such a unanimity around the idea that Democrats are completely doomed. These are the same people who brought us President Hillary Clinton," Burton said. "Maybe things aren’t as bad as the entire chattering class seems to think they are."

The White House is working to quash speculation that Biden may not seek reelection in 2024 given his current struggles.

Noting that Biden has declared his intent to run publicly and privately, his aides say the Democratic National Committee and Biden's political team inside the White House are actively moving forward with the assumption he will seek a second term.

They believe Biden's position will improve as voters digest the new infrastructure law and the $2 trillion social spending and climate bill currently moving through Congress. Already, the DNC and its allies are focusing significant resources on selling the Democrats' accomplishments in key states before the 2022 midterm elections — states such as Arizona, Georgia, Nevada, New Hampshire, Pennsylvania, and Wisconsin that will also be top battlegrounds in the 2024 presidential election.

Despite their optimism, tensions inside the White House are real as the new leadership team learns to work together.

Harris' allies are especially frustrated that Biden seems to have limited the vice president to a low-profile role with a difficult policy portfolio — led by voting rights and immigration.

She was traveling with reporters in Ohio on Friday when Kyle Rittenhouse was acquitted of all charges in last year's deadly shootings in Kenosha, Wisconsin, that became a flashpoint in the debate over guns, vigilantism and racial injustice. But she had to wait until Biden had addressed the case before she could weigh in, saying "the verdict really speaks for itself."

And when she delivered her speech on the infrastructure law, there was little sign of Democratic enthusiasm.

The crowd of invited guests barely filled one-quarter of a local union hall. Almost none of Ohio's top Democrats attended the event, including Sen. Sherrod Brown or the high-profile Democrats running for governor. Rep. Joyce Beatty, who represents the district where Harris spoke, was the only member of Congress in attendance.

"Because of our work together, America is moving forward," Harris declared, explaining that the infrastructure law would "make the most significant investment to fix our road and bridges in 70 years."

But just as in New Hampshire, the White House's message was clouded by frustration over Biden's presidency.

Ohio Democrat Nina Turner, who served as co-chair of Bernie Sanders’ 2020 presidential campaign, said "very little has changed" for the poor and middle-class since Biden replaced Trump. The infrastructure bill does not change that, she said, and she blasted Biden's social spending package as "build back less better."

"The question becomes, ‘Why am I helping you to hold to power, when the power you have right now you’re not using on my behalf?’" Turner said of Biden. "That’s called insanity — asking me to vote for you, asking the Black community to come out for you in 2022 or 2024 when you ain't doing nothing in 2021."

Indeed, Rev. Al Sharpton, a civil rights activist who attended the White House signing ceremony for the infrastructure bill, warned that Biden was approaching "the red zone" with Black voters.

At the end of the infrastructure event, Sharpton said he urged Biden to use his bully pulpit to fight harder to enact a policing overhaul and protect voting rights that are under attack in Republican-led states.

"They’ve got to between now and the end of January crank it up or they’re going to have real problems," Sharpton said.