WASHINGTON -
Dr. Anthony Fauci and Dr. Deborah Birx were not household names a few months or even weeks ago. But after speaking at nearly every one of President Donald Trump’s daily coronavirus press briefings, these two medical professionals have become synonymous with America’s current efforts in addressing the COVID-19 pandemic.

But who are they? The two seasoned medical professionals have a long history in public service, as well as a mentor-student relationship that dates back decades.

Fauci has served in that role since 1984, according to a biography provided by NIH, where he “oversees an extensive portfolio of basic and applied research to prevent, diagnose, and treat established infectious diseases such as HIV/AIDS, respiratory infections, diarrheal diseases, tuberculosis and malaria as well as emerging diseases such as Ebola and Zika.”

A program for an award he received in 1989 details some of the earlier life and career experiences that influenced what would be a storied career in medicine. The Brooklyn-born Fauci said that working as a construction laborer for four summers helped him to understand what a “lot of people need to do to make a living.” While at Cornell Medical School, he became quickly “fascinated with immunology,” which, at the time, was a fairly undeveloped medical field. 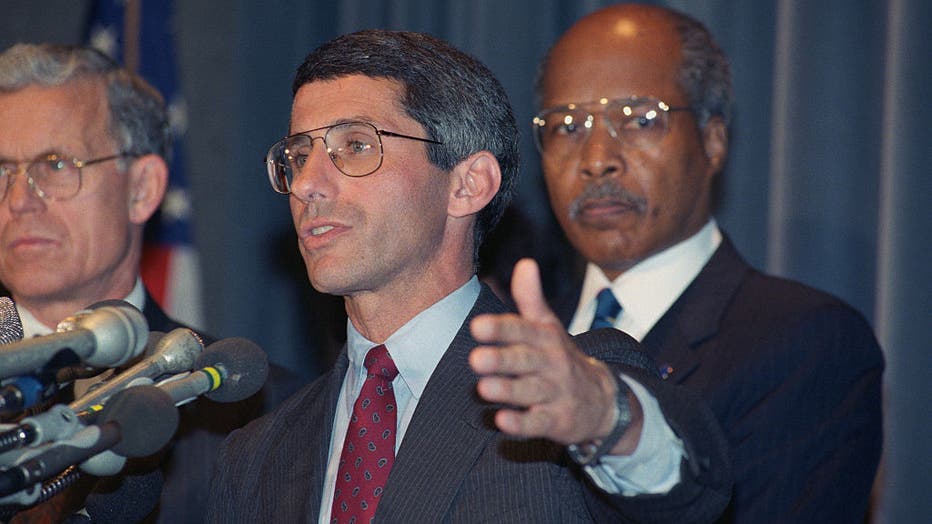 (Original Caption) Washington: Dr. Anthony Fauci of the National Institutes of Health details new findings by government researchers that indicate that the drug AZT may significantly prolong the lives of upwards of halfd the estimated 1.5 million Ame

Fauci would join the NIH after medical school, earning a firm reputation as a skilled researcher who possessed a strong bedside manner. The doctor would be thrust into the limelight in the 1980s when he worked to help treat those suffering from the growing HIV/AIDS epidemic.

Fauci was instrumental in understanding how the virus and disease operated, as well as making clinical trials more available to patients. He also oversaw research into drugs that could help extend life expectancy for those diagnosed, the Advocate notes.

The doctor has advised six different U.S. presidents on HIV/AIDS, as well as other initiatives related to infectious disease. He worked with President Barack Obama on the administration’s response to the West African Ebola outbreak, and helped in George W. Bush’s response to the anthrax scares shortly after 9/11.

Fauci’s primary, or at least most recognizable, responsibility is helping maintain the United States’ response to the novel coronavirus. In his spare time, Fauci is an avid runner. Back in the 1980s and ‘90s, in-between his daily work on AIDS, he was able to squeeze in seven mile runs, according to Runners World. During the COVID-19 pandemic, he’s found time He’s since cut that daily distance down to 3.5 miles.

Vancouver’s West End erupts in applause every night in honor of the medical professionals on the front lines of the world’s fight with COVID-19.

Prior to serving on the White House Coronavirus Task Force, Dr. Deborah Birx served as the coordinator of the United States Government Activities to Combat HIV/AIDS, as well as the U.S. special representative for Global Health Diplomacy, according to her biography on the U.S. Department of State's website.

Like Fauci, who Birx regards as her mentor, Birx is well-regarded in the medical community for her work in understanding, treating and preventing infectious diseases, as well as her contributions to addressing the HIV/AIDS epidemic. The Penn State medicine grad started her career at the Department of Defense (DOD). Birx rose through the military medical ranks, known for keen leadership and management skills. 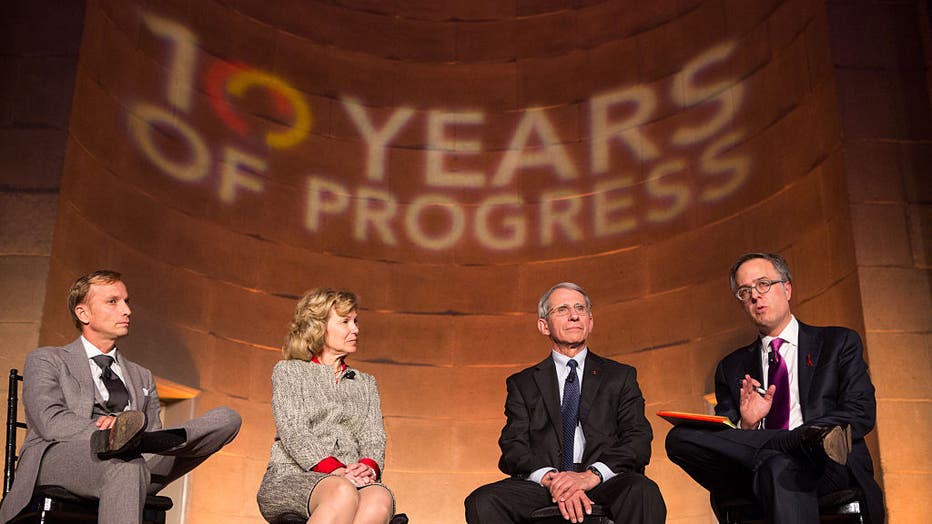 Birx would leap from the DOD to the CDC, or Centers for Disease Control and Prevention, where she worked as the director of the Division of Global HIV/AIDS (DGHA), according to the state department. During his second term, President Obama worked with Birx on HIV/AIDS-related initiatives.

Like Fauci, Birx often appears and speaks at the daily White House Coronavirus Task Force press briefings, but has shared more personal details about her life and uprbringing and how those have impacted her approach to public health initiatives. In one recent briefing, while highlighting the importance of social distancing, Birx discussed how her grandmother unknowingly passed on the Spanish flu to her great-grandmother.

In a recent virtual town hall, while highlighting the importance of having necessary protective equipment in place for the medical professionals treating those infected, Birx discussed how her mother was a nurse and how nurses were often those serving directly on the front lines of outbreaks.

Fauci and Birx’s work on the coronavirus task force

While Trump has been criticized for his early efforts to downplay the severity of the outbreak and for his airing of grievances against detractors during a time of crisis, the work of the task force in recent weeks has been largely met with praise.

Task force meetings have developed a familiar routine: Vice President Pence opens with the agenda for the day and turns it over to Birx, who provides an update on the outbreak along with CDC chief Dr. Robert Redfield. Typically, the group limits its discussion to no more than three subjects that need decisions, matters ranging from which agency will run point on an issue to whether to restrict travel from another country. 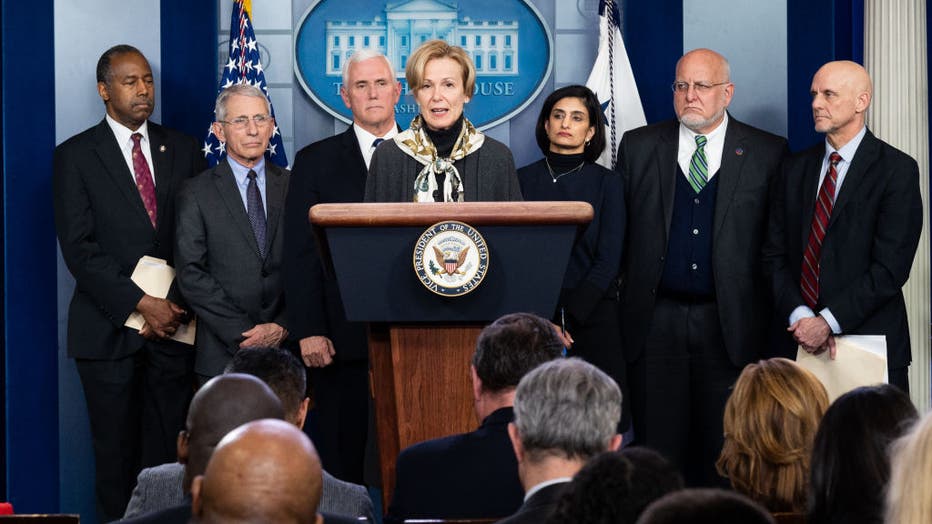 Just because Fauci and Birx are serving with Trump, though, does not mean they always agree with him. Trump indicated his desire for the country to be up and running again by Easter. Many public health organizations have noted that to be an unrealistic and unsafe deadline, with some cities like Los Angeles indicating that stay-at-home orders could extend for additional months.

Fauci, though, noted the importance of being very flexible and evaluating data further.

RELATED: President Trump says he would love to have country 'open by Easter'

Birx has also contrasted Trump. When the president asked if the White House briefing room “would ever again be full of ‘very angry’ reporters," Birx provided a more general response that "we're learning a lot about social distancing and respiratory diseases.“

On one recent morning, Fauci was conferenced in by telephone when he shared news that landed like a gut punch: World Health Organization data showed that younger people were becoming seriously ill at higher rates than previously reported.

Barely an hour later, Birx stood at the White House lectern to sound the alarm publicly.

“There are concerning reports coming out of France and Italy about some young people getting seriously ill, and very seriously ill in the ICUs,” she said at the March 18 briefing. 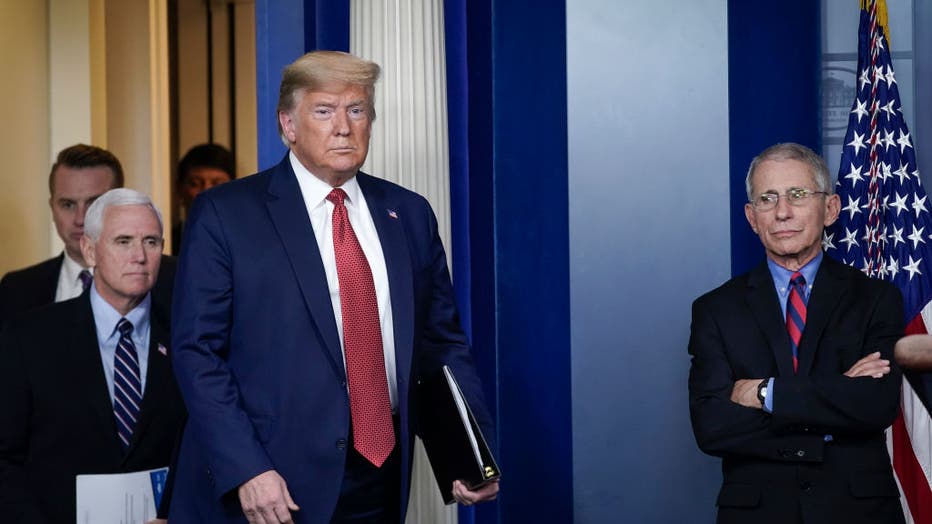 Fauci has trended on Twitter. Birx has been praised for her thoughtful, plain-spoken responses (and her endless array of colorful scarves.) And Pence has gotten credit, even from Democratic governors, for open lines of communication with state officials. Even so, the panel has had to contend with criticism over shortages of tests and medical equipment, the shifting advice on the potential threat to young adults and other matters.

But the task force, for its part, soldiers on — brainstorming options, fielding calls from worried governors, trying to publicly explain the president's thinking — and sometimes working to change it.