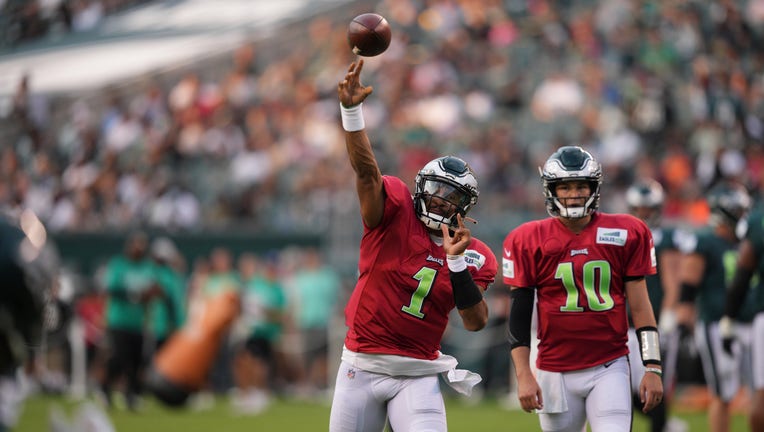 PHILADELPHIA - Nick Sirianni and his staff "are still talking through" how playing time will be allocated in Philadelphia's preseason opener Thursday against the Pittsburgh Steelers.

The Eagles’ first-year coach indicated that Jalen Hurts will start at quarterback, and most healthy players will see action. Left tackle Andre Dillard won’t play after suffering a sprained knee in Tuesday’s practice. Dillard, a 2019 first-round pick competing with Jordan Mailata for the starting job, is listed as week-to-week.

"Everybody’s in a little different scenario," Sirianni said Tuesday. "Expect everybody to play, for the most part."

Sirianni said Hurts’ playing time might depend on how the offense performs — presumably how long it takes to get the second-year quarterback a decent number of snaps. Sirianni didn’t say how many series or snaps would be ideal.

MORE: Eagles WR DeVonta Smith out with a knee sprain

Hurts started the final four games last season after Carson Wentz was benched. He said he would play every down, if asked to do so, and emphasized the importance of players getting comfortable in Sirianni’s offense. Second-year wide receiver Jalen Reagor said Hurts has been quizzing teammates on details at the team’s practice facility.

"You want to make sure everybody knows what they’re doing," Hurts said. "It gives you reassurance when you’re on the field. You have certain routes that have certain rules to them, certain things to activate versus certain coverages. We want to make sure everybody’s doing that so there’s no hesitation on my behalf, fearing that someone may mess up, or not be aware of what they’re supposed to do."

The team’s most intense competition has been between Dillard and Mailata, a former rugby player from Australia who was drafted in the seventh round in 2018.

On Sunday, Sirianni said draft status won’t factor into his decision on a starter.

FOX 29's Jenn Frederick meets up with former Eagles player Ike Reese as he signs autographs for the families in attendance ahead of Sunday's 1st public practice.

Sirianni turned 40 in June and is Philadelphia’s youngest head coach since Dick Vermeil in 1976. This will be his first game in charge at any level, though he said he called plays at times in preseason games when he was an assistant with the Chargers and Colts.

"It’s definitely a trial run," Sirianni said. "We’re prepared, really prepared. But there will be things that pop up, and I look forward to the trial run on Thursday."

Replacing Doug Pederson in January during the COVID-19 pandemic has presented challenges for Sirianni, who wasn’t able to run 11-on-11 drills in the spring. He was still installing his offense last week; usually, by the first preseason game teams are long past that stage.

"It’s not that you’re behind. You just have less reps," Sirianni said. "I’m really pleased with where we are right now, especially with 11-on-11 drills."

Sirianni said he will call plays, with offensive coordinator Shane Steichen relaying them to the quarterback.

"That’s the communication that (the QB) hears every day in practice, and that’s why we’ll do it like that in the game," Sirianni said.

Reagor said the first preseason game will provide "that first hint of identity" for the offense, though Sirianni cautioned fans not to expect much.

"One of the things that we have to our advantage is that nobody really knows what we’re running," he said of his first-year staff. "To say we’re going to show everything (in the preseason), it’s just not going to be the case."

Notes: The Eagles announced that veteran DE Ryan Kerrigan had thumb surgery and is expected to miss 7 to 10 days. ... First-round rookie WR DeVonta Smith, recovering from an MCL sprain, jogged around some cones with a pressure sleeve on his left leg. ... S K’Von Wallace also is week-to-week after sustaining a strained groin in practice. ... WR Michael Walker rode the cart inside after crumpling with a recurrence of a foot injury. ... RB Kerryon Johnson’s attempt at pass-blocking vs. DE Derek Barnett ended with Johnson flying backward, head over heels ... CB Darius Slay, asked to name a receiver who has impressed him, identified "Ugly Quez" Watkins. Slay did not explain the nickname. ... Reagor was an outside receiver last season but has done a lot of work in the slot in this camp. Reagor said he played the slot a lot in high school and college. "It’s not nothing new. ... just getting back to my roots," he said.