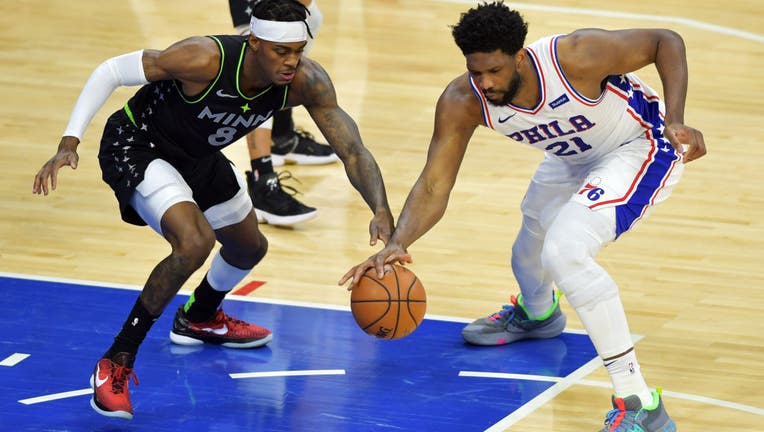 PHILADELPHIA, PA - APRIL 03: Jarred Vanderbilt #8 of the Minnesota Timberwolves tries to steal the ball from Joel Embiid #21 of the Philadelphia 76ers in the second quarter of the NBA game at Wells Fargo Center on April 3, 2021 in Philadelphia, Penns

PHILADELPHIA - Joel Embiid was happy to be back on the court even if he wasn’t thrilled with his game.

Embiid had 24 points and eight rebounds in his return to the lineup, and Tobias Harris scored 32 to lead the Philadelphia 76ers over the Minnesota Timberwolves 122-113 on Saturday night.

Embiid missed the previous 10 games due to a bone bruise in his left knee. The four-time All-Star and MVP candidate entered averaging 29.9 points and 11.5 rebounds in 31 games this season.

Philadelphia fans were happy to see their favorite big man back in action, serenading a smiling Embiid with "M-V-P! M-V-P!" chants when he was shown on the big screen during warmups.

With his left knee heavily wrapped, Embiid moved well but his game wasn’t quite as sharp as it had been before he got injured March 12 at Washington. Embiid shot 6 of 14 from the field, but missed all four 3-point tries, and converted 12 of 17 free throws.

"It felt great," he said. "Just trying to get my rhythm back. I’m going to blame the brace I was wearing. I just felt like I didn’t have my rhythm all game. It felt like I wasn’t smooth. I hate the brace."

Ben Simmons added 14 points, eight rebounds and six assists for Philadelphia (34-15), which pulled even with idle Brooklyn for the best record in the Eastern Conference.

"We won the game, but I wasn’t thrilled how we played," coach Doc Rivers said. "It was one of those sloppy, ugly games. We had so many chances to put the game away, but we refused to do that tonight."

Karl-Anthony Towns had 39 points, 14 rebounds and five assists for the Timberwolves, who have the worst record in the NBA at 12-38.

"He is unstoppable. Just give him the ball," said teammate Anthony Edwards, who added 27 points.

Led by Towns’ 17 points and eight rebounds, Minnesota hung around in the first half and trailed just 64-60 at the break. Philadelphia used a quick 13-0 run to start the second half, over which the 76ers didn’t miss a shot, to take control. The spurt was capped by Seth Curry’s free throw that made it 77-60 with 9:03 left in the third quarter following a technical foul on Minnesota coach Chris Finch.

That was too much ground for the Timberwolves to make up — although they did make it a game late.

Minnesota got as close as four on several occasions in the last five minutes, the last on Edwards’ dunk with 2:02 left. But Harris was too much down the stretch, coming up with an answer every time the Timberwolves got close. Harris hit the final four 76ers field goals, including a driving dunk that made it 117-111 with 1:46 to play.

"Win by any means, that’s really my mentality," Harris said. "My intention is to do whatever I can to walk in the locker room with a win."

The two big men have an adversarial history, with both earning suspensions for a fight during an October 2019 game in Philadelphia that was followed by a postgame exchange of social media barbs.

There were some moments on Saturday that could’ve gotten heated, but Towns remained calm throughout and leaned on his play.

He provided a highlight in the first half when he dunked over Embiid with 8:15 left in the second quarter.

"Just a play, two points. Felt good to get two points on the board," Towns said. "I ain’t worried about that squabble; I’m trying to get wins."

Towns, booed during introductions and whenever he touched the ball, followed up the dunk with an emphatic block of Matisse Thybulle’s layup attempt on Philadelphia’s ensuing possession.

Embiid gained some revenge late in the half when he crossed over Towns, was fouled and hit a short baseline jumper before landing on the court.

Philadelphia’s big man spun Towns around with a hard foul with 7:04 left in the third, but nothing came of it. Embiid tried to keep Towns calm, although Towns walked away looking unhappy. Finch wanted the officials to review the play for a possible flagrant foul, but there was no review.

Embiid did get whistled for a Flagrant 1 foul with 7:38 left in the fourth when he slashed down at Towns’ arms as he was driving to the basket.

"I’m not here to live out a narrative people want; I’m here to win the game," Towns said. "I take hard fouls every game."

Timberwolves: Finch, a Pennsylvania native from Reading, said he had friends in attendance. … Ricky Rubio (back) and Malik Beasley (hamstring) didn’t play. … Minnesota dropped to 5-21 on the road.

76ers: Rivers said afterward Embiid’s status for Sunday’s game against Memphis wasn’t yet determined but the team would be more "cautious than aggressive" with its star center. … Philadelphia improved to 20-4 at home and 17-5 against teams under .500. … Veteran G George Hill participated in non-contact drills at shootaround. Hill, acquired by the 76ers on March 25, has been out since Jan. 24 with a thumb injury. … Embiid has missed 16 games with back and knee injuries this season.