A local family is searching for a homeless man who discovered a woman's lost keys in Philadelphia and returned them to the car with a note. FOX 29's Eddie Kadhim has the story.

PHILADELPHIA - A simple act of kindness on Thanksgiving Eve saved the day for a family and now they've reconnected with the man responsible.

Rose McSorley was celebrating her daughter's wedding in Philadelphia when she lost her car keys.

"All the guests were leaving and we were the last ones to leave," McSorely said. "We got out to the car and realized we had no keys."

After checking the venue parking lot, McSorely decided to hitch a ride home and bring a spare set tomorrow when the sun was up.

When she got back to her car, she found a pleasant surprise. A note informed her that a man found her keys and hid them in the car's wheel well for her. 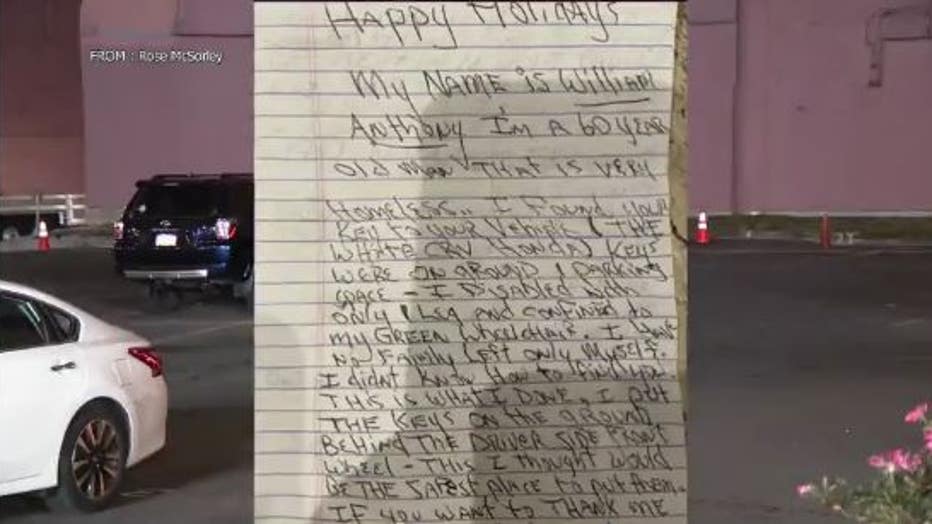 "It said very important, so we opened the letter and it was from William Anthony. He said he was a 60-year-old homeless man with one leg. He will be in a green wheelchair and he will be sitting at 10th and Market from 11 a.m. until 3 p.m. today. We drove around from 10 a.m. to 11:30 a.m. and we couldn't find him," she said.

Despite not being able to locate Anthony, McSorely was on a mission to find him and thank him.

"I would invite him to Thanksgiving dinner if I would have found him this morning," she said.

The act of kindness sparked an emotional response in McSorley's daughter Chelsea Wilkinson.

"I was crying reading the letter this morning. I was just shocked," she said. "I just didn't think there were still good people in the world like that."

When she got back to her car, she found a pleasant surprise. A note informed her that a man, who said he was homeless and uses a wheelchair, found her keys and hid them in the car's wheel well for her.

On Friday, McSorley was able to find Anthony and thank him for his kindness.

She also says she purchased him some gifts as an additional thank you gesture.