WASHINGTON - Dr. Anthony Fauci on Wednesday clarified the U.S. will "go by the science" from its own clinical trials and continue administering second doses of the Pfizer-BioNTech and Moderna vaccines within the recommended timeframe, despite a new study from AstraZeneca that could support lengthening the window.

Speaking at a COVID-19 briefing, the U.S. government’s top infectious disease expert dismissed deliberately delaying second shots of the approved Pfizer and Moderna vaccines. The U.K. has implemented a contentious strategy of delaying the second shot so it can protect more people quickly with a first dose — a decision that has been criticized as risky by other European countries.

Pfizer recommends that its shots be given 21 days apart, while Moderna recommends a 28-day window.

"We also are going very much by the data and science that has emanated out of very large clinical trials," Fauci said. "We feel strongly that we will go by the science, which dictated for us the optimal way for us to get the 94-to-95 percent response."

Earlier Wednesday, researchers from Oxford University released a study about AstraZeneca’s coronavirus vaccine, which suggested a single dose of the AstraZeneca formula provides a high level of protection for 12 weeks. Up to now, the recommended time between doses has been four weeks.

The findings were greeted with excitement by U.K. officials under pressure to justify their decision to delay the second dose.

The study has not been peer-reviewed yet, and it did not address dosing of the Pfizer vaccine, the other one currently in use in the U.K. Pfizer has not endorsed the decision to space out the time between doses.

Fauci said the U.S. respects the findings by British researchers and health officials "letting their own data for their own platform dictate their policy." But he said the Moderna trial of 30,000 participants and the Pfizer trial of 44,000 participants indicate the vaccine is most effective when given in the window of 28 days and 21 days, respectively.

He added that receiving the second dose four to six weeks later is okay "under special circumstances," as is advised by the U.S. Centers for Disease Control and Prevention.

"That doesn’t mean that we want to do it at six weeks later. It means that under special circumstances, it’s better to delay that couple of weeks than not do it at all," he said. 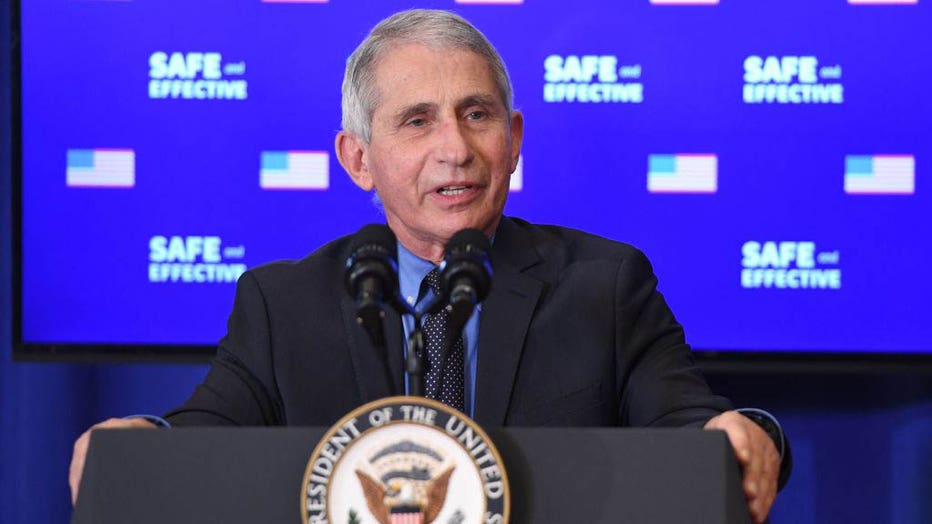 As the campaign to suppress the outbreak continues, the findings about AstraZeneca’s vaccine appeared to be good news as a potential way to ease vaccine shortages and get shots into more arms more quickly.

The makers of all three vaccines have said that their shots proved to be anywhere from 70% to 95% effective in clinical trials in protecting people from illness caused by the virus. But it was unclear whether the vaccines could also suppress transmission of the virus — that is, whether someone inoculated could still acquire the virus without getting sick and spread it to others.

As a result, experts have been saying that even people who have been vaccinated should continue to wear masks and keep their distance from others.

At first, Jennifer Martin brought books home from her classroom at the start of the pandemic and started a rudimentary checkout system. But now her library has grown by the thousands, thanks to donations from strangers across the globe.

Oxford's study, however, found that the vaccine not only prevented severe disease but appeared to cut transmission of the virus by two-thirds. Volunteers in the study underwent regular nasal swabs. The level of virus-positive swabs — from both those who had COVID-19 symptoms and those who had none – was 67% lower in the vaccinated group.

The researchers also looked at how likely people who have been vaccinated are to get a symptom-free infection. In one subset of volunteers, 16 asymptomatic infections were among the vaccinated and 31 in an unvaccinated comparison group.

Pfizer and Moderna also are studying the effect of their vaccines on asymptomatic infections.

In addition to being approved in the U.K., AstraZeneca’s vaccine has also been authorized by the 27-nation European Union.