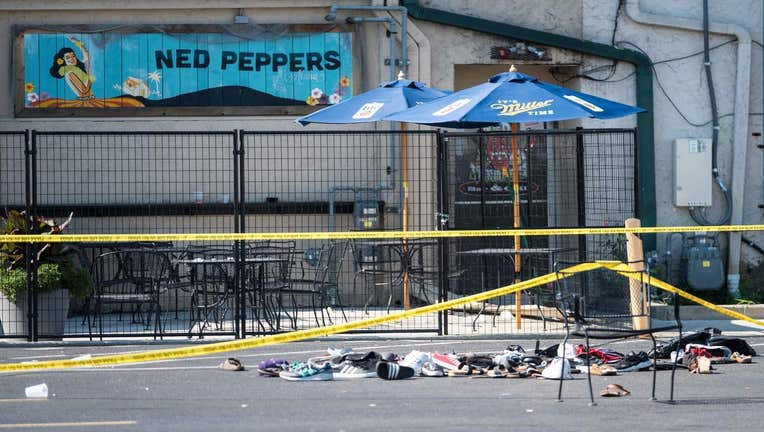 Pairs of shoes are piled behind the Ned Peppers bar belonging to victims of the Dayton, Ohio, mass shooting. (MEGAN JELINGER/AFP/Getty Images)

Gov. Mike DeWine said Ohio needs to do more while balancing people's rights to own firearms and have due process during a press conference Tuesday. He outlined a series of legislative actions he wants the Legislature to take up to address mental health and gun violence.

"We can come together to do these things to save lives," DeWine said.

His calls for action could be an uphill battle for the Legislature, which has given little consideration this session to those and other gun-safety measures already introduced by Democrats. DeWine's Republican predecessor, John Kasich (KAY'-sik), also unsuccessfully pushed for a so-called red flag law on restricting firearms for people considered threats.

Police say there was nothing in the Dayton shooter's background to prevent him from buying the firearm used.

The shooting outside a strip of nightclubs early Sunday and another mass shooting in El Paso, Texas , during the past weekend left a combined total of 31 people dead and more than 50 injured in less than 24 hours.

Police have said 24-year-old Connor Betts was wearing a mask and body armor when he opened fire with an AR-15 style gun. If all of the magazines he had with him were full, which hasn't been confirmed, he would have had a maximum of 250 rounds, said Police Chief Richard Biehl.

"To have that level of weaponry in a civilian environment is problematic," Biehl added.

Two former classmates told The Associated Press that Betts was suspended during their junior year at Bellbrook High School after a hit list was found scrawled in a school bathroom. That followed an earlier suspension after Betts came to school with a list of female students he wanted to sexually assault, according to the two classmates, a man and a woman who are both now 24 and spoke on condition of anonymity out of concern they might face harassment.

Others remembered how he tried to intimidate classmates.

"It's baffling and horrible that somebody who's been talking for 10 years about wanting to shoot people could easily, so easily, get access to a military grade weapon and that much ammo," said Hannah Shows, a former high classmate who remembered seeing Betts look at people and imitate shooting at them.

"He was someone who enjoyed making people afraid," she said.

"He was the bully," Brickler told the AP. "He used to make fun of me on the bus, talk about my weight, make me feel bad about myself. He would laugh and think it was funny, joke about it. We thought it was a normal thing."

But the seemingly normal heckling turned scary one day when she said two police officers pulled Betts off their bus during her first few weeks of high school. When she arrived home that day, her mom sat her and her brother down to tell her the school principal had called - they had been named on Betts' "hit list."

Betts disappeared from the halls of Bellbrook High School. Students were offered counseling, teachers checked on kids, and extra police officers were on hand. Brickler said Betts later returned to the school.

Others that had encounters with Betts, however, painted a different picture.

Brad Howard told reporters in Bellbrook on Sunday that he knew Betts from preschool through their high school graduation.

Bellbrook Police Chief Doug Doherty said he and his officers had no previous contact with Betts and weren't aware of any history of violence. Sugarcreek Township police said the only records they have on Betts are from a 2015 traffic citation. They noted without further explanation that Ohio law allows sealed juvenile court records to be expunged after five years or when the person involved turns 23.

Still unknown is whether Betts targeted any of the victims , including his 22-year-old sister, Megan, the youngest of the dead.

"It seems to just defy believability he would shoot his own sister, but it's also hard to believe that he didn't recognize it was his sister, so we just don't know," Biehl said.

While the gunman was white and six of the nine killed were black, police said the speed of the rampage made any discrimination in the shooting seem unlikely. It all happened within 30 seconds, before police officers stationed nearby fatally shot Betts.

Any attempt to suggest a motive so early in the investigation would be irresponsible, Biehl said.

The El Paso and Dayton killings have contributed to 2019 being an especially deadly year for mass killings in the U.S.

A database by The Associated Press, USA Today and Northeastern University shows that there have been 23 mass killings so far this year, claiming the lives of 131 people. By comparison, 140 people died in mass killings in all of 2018. The database tracks every mass killing in the country dating back to 2006.

President Donald Trump said he wanted Washington to "come together" on legislation providing "strong background checks" for gun users, but he gave no details. Previous gun control measures have languished in the Republican-controlled Senate.

The Democrat-led House has passed a gun control bill that includes fixes to the nation's firearm background check system, but it has languished in the Senate.