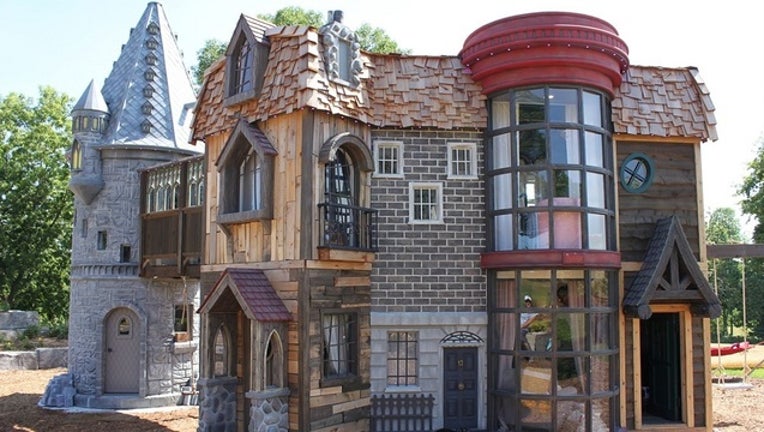 Meet the little girl with possibly the best playhouse in the world – a massive 350 square foot "Harry Potter" themed fortress.

Grandparents Dave and Ruby Dunlop had the incredible two-story magical house built in their back garden, for their eldest granddaughter Logan, two.

It has a broom swing set, slide, and secret hatch, as well as a wooden bridge leading to an owlery, just like the one from J.K. Rowling's books. 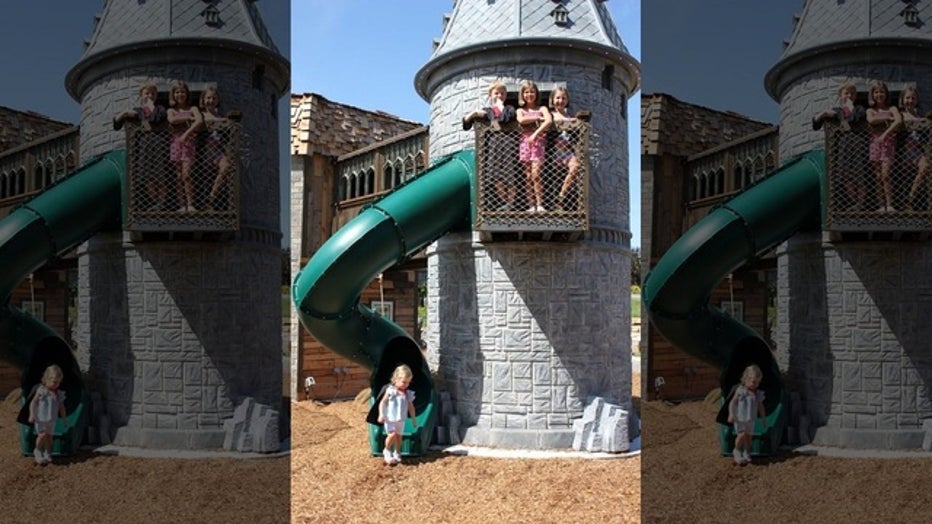 It's a perfect outdoor play home for Logan, her best friends and two younger siblings when they grow up.

Inside the main tower, there are owl-themed armchairs, a beautiful chandelier and even a slide leading back down to the bottom of the house.

Portraits of headmaster Albus Dumbledore, and Harry, Ron and Hermione, a map of the school grounds and a framed letter of invitation to Hogwarts, hang over the stairwell.

There is a bed on the top floor for cool summer sleepovers and an electric fireplace on the bottom floor to keep warm at winter. 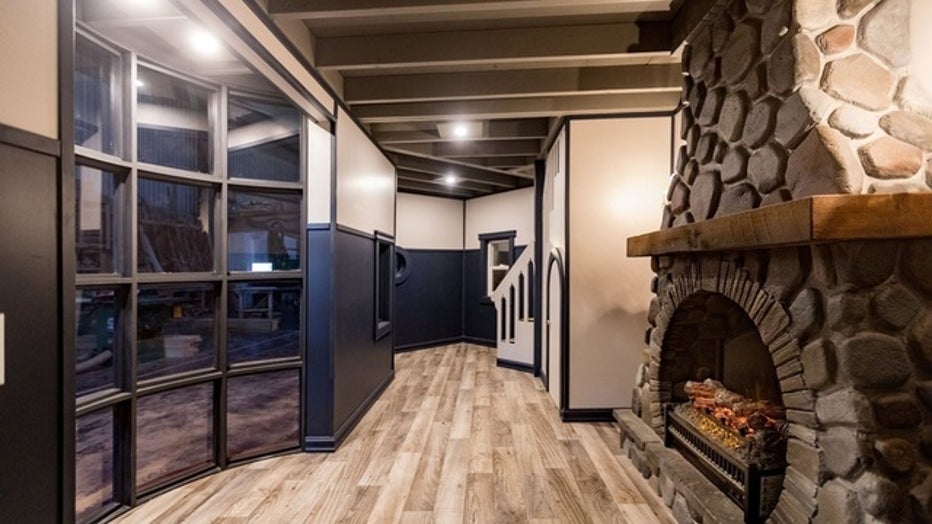 And there's even a cupboard under the stairs for games of hide-and-seek.

It took six weeks for Charmed Playhouses in Alberta, Canada, to build the playhouse in a massive workshop, and then three more days to set it up in Spencerville, Ontario.

The family declined to reveal the price tag, but customers pay anything from $15,000 to $250,000 for bespoke luxury playhouses from the firm, headed by Tyson Leavitt.

"My daughter and her partner are huge 'Harry Potter' fans - but none of us really know how to design a building, let alone a playhouse!" grandfather Dave said.

"We felt it would be so neat if Logan had a special place for her to come and play with at Pa's and Gram's. So we gave Tyson full creative freedom. My son and his wife got a playhouse built for them by Tyson too, and it was delivered the same time as ours - so we're somewhat loyal customers!" he continued.

"It got exactly the reaction we'd hoped for," he revealed. "When our granddaughter came out the second time to play, she asked if she could go to 'her house.'"

"Even a month since it was set up, every time she comes outside, she spends time in it," the proud grandfather said. "Gram and her absolutely love to have tea in the little kitchen and lose track of the time. 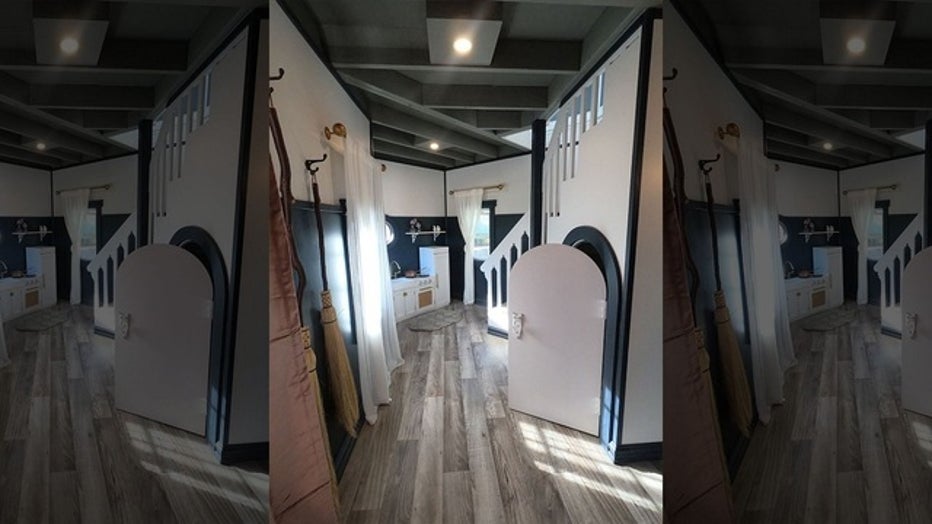 "You should see her face when she's using the playhouse. We're so thrilled with it. All our friends and neighbors are impressed with it too," Dave claimed.

"It's a popular addition to our community, with many stopping to look and take pictures," he went on. "We hope to have a zip line attached in five to six years, which will go from the balcony of the Hogwarts tower down to the ground."

The fortress was designed in a few hours, and took two days to render in 3D and produce blueprints for building.

Leavitt, who runs the small family business Charmed Playhouses, builds luxury playhouses for people in North America, as well as the U.K., China, and Mexico.

He described the playhouses he makes for children of all ages as "custom homes, but smaller scale and with way more fantasy". 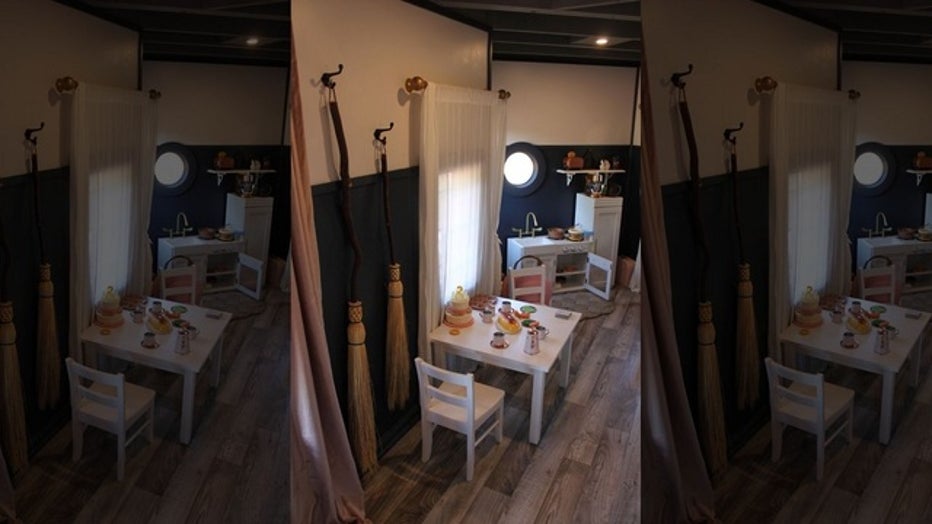 Past designs have included a Disney-themed princess castle attached to Rapunzel's tower, Captain Hook's pirate ship and Neverland, and a Hobbit hole.

"The Dunlops are elated to have the playhouse in their backyard as it will become the pinnacle of family memories for years to come," Leavitt declared.

This story was originally published by SWNS.