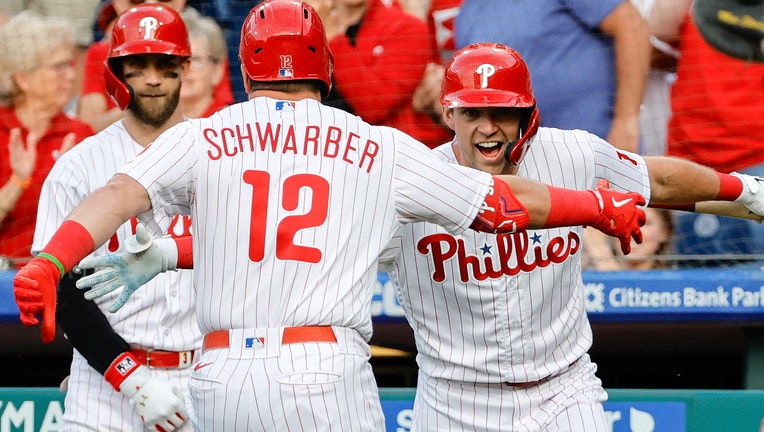 PHILADELPHIA, PENNSYLVANIA - JUNE 03: Rhys Hoskins #17 of the Philadelphia Phillies celebrates following a home run by Kyle Schwarber #12 during the first inning against the Los Angeles Angels at Citizens Bank Park on June 03, 2022 in Philadelphia, P

PHILADELPHIA - Kyle Schwarber mashed the first pitch in the bottom of the first inning almost 435 feet for a home run — and a needed instant lift for a Phillies franchise again counting on a managerial change to spark the team into a long-shot run into the playoffs.

Bryson Stott hit his first big league shot to back Zach Eflin in sending the Angels to their ninth straight loss, their worst skid since an 11-game drought in 2016. The Angels had won 12 in a row against the Phillies.

The Phillies fired Joe Girardi earlier in the day after two-plus seasons of middling results and the team well out of the NL East race. Thomson, a long-time bench coach under Girardi with the Yankees and Phillies, was charged with turning around the Phillies.

"I had a little more anxiety leading up to the game dealing with all the stuff, all the meetings," Thomson said. "Once we got to the game, I felt OK. It was normal."

Thomson has plenty of work ahead as the sub.-500 Phillies chase the final NL wild-card spot.

Failing to capitalize on lofty pre-season expectations, Joe Girardi was fired as manager of the Philadelphia Phillies on Friday.

Trout received a warm ovation in his first game in Philadelphia since 2014 and signed autographs before the game for swarms of fans. A diehard Philadelphia Eagles fan, Trout said he lost count of how many Millville, New Jersey, natives traveled to Citizens Bank Park to see him. Trout said before the game he wanted to "enjoy tonight, see some familiar faces."

Trout went 0 for 4, a night after he was drilled on the left arm by a pitch against the Yankees.

Eflin (2-4) cruised behind all that run support and struck out six in eight innings. He earned his first win sine April 26. The right-hander added a moment for the career highlight reel: he struck out Ohtani looking and struck out Trout swinging in consecutive at-bats in the first.

"Just to get those two guys out in the first inning and calm things down, it was huge," Thomson said.

The Philadelphia Phillies have relieved Joe Girardi of his managerial duties and appointed Rob Thomson as interim manager for the remainder of the season.

Schwarber put a fast end to Trout and the Angeles’ enjoyment. He hit a leadoff homer against Chase Silseth (1-1).

Stott’s three-run shot an inning later made it 4-0 and chased the Angles right-hander. As Stott crossed the plate, a Phillies fan shouted, "We don’t need Joe anymore!"

Whatever the reason, the Phillies came out bats booming and led 10-0 in the sixth, their most runs since a 12-10 win on May 13 over the Los Angeles Dodgers.

Harper missed Girardi’s final game on Wednesday with right forearm soreness. He connected on a three-run shot in the fifth and a solo homer, his 12th, in the fifth. He bested Ohtani (0 for 3) in the MVP showdown and Trout, too.

When Trout hit with a runner a first, another feisty Phillies fan yelled, "We love you Mike but hit into a double play!"

Schwarber, who lifted his average from .192 to .200, connected on a solo shot in the sixth for his 16th career-multi homer game.

"It's two homers, right? It's not like it's going to be guaranteed tomorrow," Schwarber said.

Maybe not. But Thomson can only hope his first win was the start of a better summer in Philly.

"Hopefully, it's the first of many," Harper said. "We've got a long ways to go and we've got to keep playing our ball and keep doing our thing. We were all really excited for him."

Angels RF Taylor Ward left the game with right hamstring tightness after a failed attempt at a diving catch in the fifth.

Phillies 2B Nick Maton left the game with a sprained right shoulder in the fifth inning after he robbed Trout of a hit on a diving catch and landed hard the shoulder.