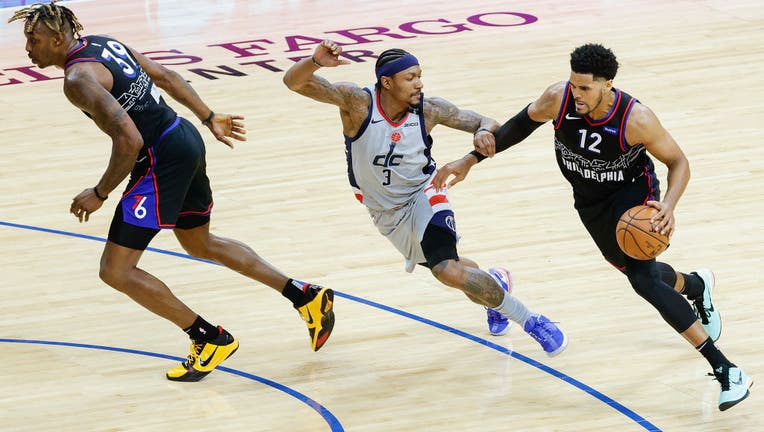 PHILADELPHIA, PENNSYLVANIA - MAY 23: Tobias Harris #12 of the Philadelphia 76ers drives past Bradley Beal #3 of the Washington Wizards during the third quarter during Game One of the Eastern Conference first round series at Wells Fargo Center on May

PHILADELPHIA - Tobias Harris showed why Philadelphia might have its own Big 3 worthy of winning a championship.

Harris carried top-seeded Philadelphia’s offense when it sagged early and scored 37 points, Joel Embiid had 30 and the 76ers survived the sub.-500 Washington Wizards in a 125-118 Game 1 victory on Sunday.

Game 2 is Wednesday in Philadelphia.

Harris scored 28 points in the first half, making a case Philly has — with All-Stars Embiid and Ben Simmons — three big stars that could rival the superstar trio of Kevin Durant-James Harden-Kyrie Irving in Brooklyn.

The Sixers needed Harris’ outburst to offset an upset-minded Wizards team that was within five points with 45 seconds left. Bradley Beal scored 33 points and Russell Westbrook had 16 — but neither sensational scorer took over in long enough stretches needed for an upset. Westbrook even stepped out of bounds with 37 seconds left, cutting off a potential rally.

Unable to create consistent offense outside of Harris, the Sixers finally put together a 3-point barrage late in the third quarter that had 11,160 fans — roughly half-capacity — sounding as if it was 20,000-plus packing the house.

Harris, of course, hit a tying 3, Seth Curry hit his first, Danny Green buried one and Curry pounded his chest and talked smack after another 3 made it 88-81.

The fans erupted soon after in a "Trust the Process" chant with Embiid at the free-throw line, and the Sixers closed the quarter with a 99-93 lead.

The Sixers hung on for their first playoff win in two years, even as Simmons went 0 for 6 from the free-throw line and scored only six points.

Embiid was whistled for three fouls and the Sixers missed 14 of 17 3-pointers in the first half, leaving it up to Harris to play up to his $180 million contract.

Harris spent the season believing he was worthy of an All-Star spot and opened some eyes with 28 points on 12-of-19 shooting in the half. He played the half like he was trying to win a game of HORSE — turnarounds, fallaway jumpers, pull-up jumpers in the paint, and in one instance, he drove the length of the court before he hit a little floater.

Beal, who torched the Sixers for 60 points in January, and Westbrook combined for just 20 points in the first half but took a 62-61 lead into the break.

Washington advanced by routing the Indiana Pacers to emerge from the play-in round as the East’s No. 8 seed, returning to the playoffs after a two-year absence. The Wizards were a disaster early in the season, dealing with injuries and a COVID-19 outbreak. They started 0-5 and were 17-32 in early April. They made the playoffs at 34-38 and are trying to become the first team with a losing record to win a playoff series since the 1987 Seattle SuperSonics.

Washington’s must-win attitude down the stretch spilled into Game 1. The Game 1 trend this weekend had been heavy favorites with time off — such as Brooklyn against Boston — needed time to find their legs before putting the game away. The Wizards played Thursday — while the Sixers had a full week off — and played every minute as a team determined to steal one on the road.

Wizards: The Wizards went on 10-0 run late in the first quarter with Embiid and Simmons on the bench. ... Washington and Philadelphia played each other for the first time in the postseason since 1986.

76ers: Dikembe Mutombo, who helped lead the Sixers to the 2001 NBA Finals, received a rousing ovation when he rang the ceremonial bell to start the game. .. They went 27-5 in the regular season with Simmons, Curry, Green, Harris and Embiid in the starting lineup. ... Harris joined Allen Iverson as the only Sixers with 28-plus points in a half in the playoffs since 1997.

Coach Doc Rivers went to each Sixer this week and told him how important his contribution this season was to their success.