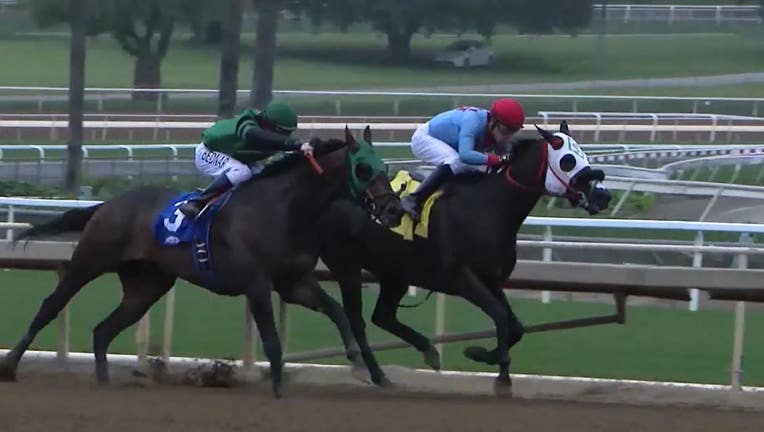 ARCADIA, Calif. - Santa Anita's opening weekend reportedly was marred by the death of another racehorse -- though the latest fatality happened on Thursday, two days before Saturday's rescheduled opening day.

Truest Reward, a 3-year-old gelding, died during a period when the track was closed to workouts but open for jogging and galloping, according to the Los Angeles Times, which said the horse broke his left front leg on the training track, considered the safest surface.

Thursday was supposed to be Santa Anita's opening day, but forecasts of rain prompted track officials to postpone the first day of its 83rd winter meeting until Saturday, when 11 races were run without incident.

Mike Willman, Santa Anita's director of publicity, did not confirm or deny the report when reached Sunday by City News Service, but he did express frustration with some media coverage of Saturday's opening day, which he said focused too much on a relatively small group of animal-rights protesters outside the track and not enough on the success of the day overall, which saw an attendance of 35,085.

Santa Anita and the sport of horse racing have faced increasing pressure from animal-rights activists amid the death of at least 38 horses at the track over the last year, which included 2017 Breeders' Cup Dirt Mile winner Battle of Midway while training at the track on Feb. 23 and Mongolian Groom, who was euthanized after suffering a fatal injury in the Breeders' Cup Classic at Santa Anita on Nov. 2.

Some activists hosted a "funeral'' and "vigil'' Saturday that included a bagpiper for the horses who have died over the past year. The California Horse Racing Board is set to issue a report next month on the horse deaths.