CDC Director Dr. Rochelle Walensky shared the agency's new guidance for fully-vaccinated Americans, which says they can gather with other vaccinated people indoors without wearing a mask, but should still cover their face in public.

JERUSALEM - After fully vaccinating nearly 40% of its population, Israel reopened much of its economy this week, including bars and restaurants, event halls and sporting events, with many places only open to the inoculated.

The country has been using a "Green Pass" program, which is granted to those who have been vaccinated for coronavirus, or people who recovered from COVID-19. It gives holders access to gyms and studios, restaurants and cafes, hotels, sporting venues, theaters and other attractions, and can be shown via an app, according to the government’s website.

Many of these public establishments had been closed to the public for months and were permitted to reopen as of Sunday. Some restrictions remained on crowd sizes and social distancing.

"We're very happy that this day came. We've been preparing for this day for a very long time," said Assaf Obsfeld, a Jerusalem coffee shop owner who was checking customers to ensure they had been vaccinated.

"It’s a stressful situation because we really don’t know how to handle everybody," he said. 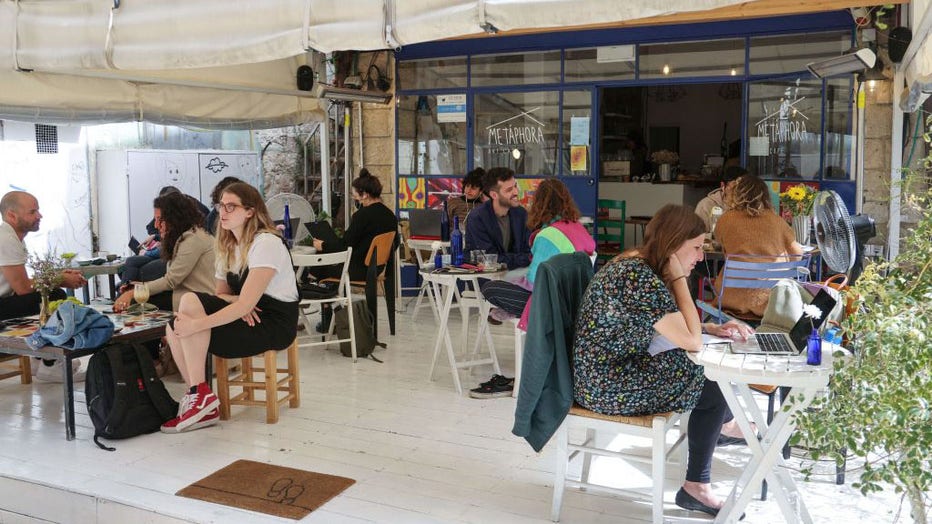 Israel has sped ahead with its immunization campaign. Over 52% of its population of 9.3 million has received one dose and almost 40% two doses of the Pfizer vaccine, one of the highest rates per capita in the world.

Nearly 90% of the country's over-50 population has either been vaccinated or recovered from the coronavirus. With that high-risk population largely inoculated, decision-makers have concluded it is safe enough to reopen more parts of the economy.

The government has also reopened the main international airport to a limited number of incoming passengers each day.

Netanyahu has been campaigning as Israel's coronavirus vaccine champion at the same time that he is on trial for corruption.

While vaccination rates continue to steadily rise and the number of serious cases of COVID-19 drops, Israel's unemployment rate remains high. As of January, 18.4% of the workforce was out of work because of the pandemic, according to Israel’s Central Bureau of Statistics.

At the same time that it has deployed vaccines to its own citizens, Israel has provided few vaccines for Palestinians in the West Bank and Gaza Strip, a move that has underscored global disparities. It has faced criticism for not sharing significant quantities of its vaccine stockpiles with the Palestinians.

On Monday, Israel’s leaders celebrated the country's 5 millionth coronavirus vaccination on the same day the government began vaccinating Palestinian laborers who work in the country.

Israeli officials have said the priority is vaccinating Israel’s own population first, while the Palestinian Authority has said it will obtain its own vaccines through the World Health Organization and other sources. Israel has vaccinated its own Arab population.

Israel has confirmed at least 805,000 cases of COVID-19 since the start of the pandemic and 5,917 deaths, according to data compiled by Johns Hopkins University.