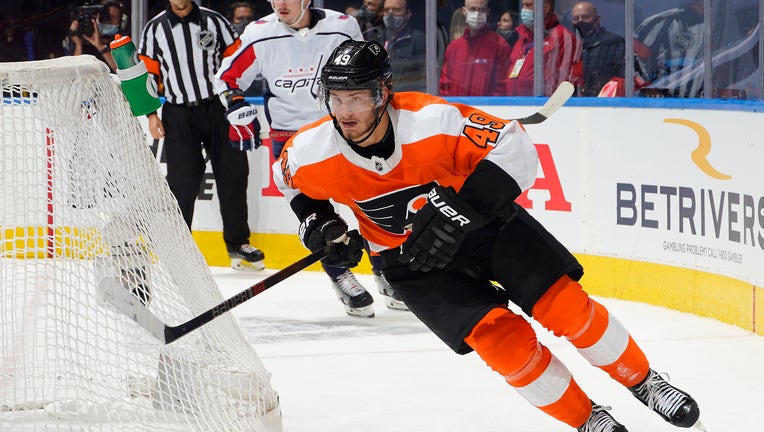 Joel Farabee #49 of the Philadelphia Flyers skates in the third period of a Round Robin game during the 2020 NHL Stanley Cup Playoff at Scotiabank Arena on August 06, 2020 in Toronto, Ontario. (Photo by Mark Blinch/NHLI via Getty Images)

TORONTO - The Philadelphia Flyers played like a team making a run as the best in the East before the NHL shutdown.

With hockey back, the streaking Flyers just might get there. With one more win, they'll earn the top seed in the Eastern Conference in coach Alain Vigneault's first season.

“I like our work ethic, I like how we’re trying to play the smart way,” Vigneault said.

Philadelphia was smart and tough Thursday against Washington, and the line of Scott Laughton, Kevin Hayes and Travis Konecny sparked the Flyers to a 3-1 win over the Capitals.

Laughton had two goals and an assist. Hayes had three assists, and Konecny had two assists.

“They're certainly without a doubt our best line at the moment,” Vigneault said.

The Flyers have won 11 of their last 12 games dating to Feb. 18 — but it's the two victories in the round-robin series that have the Flyers believing they can go far. The Flyers won nine straight games before losing the final one before the COVID-19 shutdown. The Flyers have resumed the season with wins over Boston and the Capitals in the NHL’s playoff seeding round and can’t finish any worse than second in the Eastern Conference.

The Flyers play Tampa Bay on Saturday. The winner will earn the top seed in the East.

Vigneault, who led the New York Rangers and Vancouver Canucks to the Stanley Cup Final, has made all the right moves in his first season on the bench. The outlook is suddenly bright for a franchise going on 45 years without a championship.

Travis Sanheim also scored and Brian Elliott stopped 16 shots to keep the Flyers perfect this season (4-0-1) against the Capitals. Washington's Alex Ovechkin has failed to score against the Flyers this season.

“We’re still looking for that extra gear that we all know we have,” Capitals right winger T.J. Oshie said. “The point of these games obviously is for the seeding, but for us personally we need to get our game where we need it to be.”

Laughton gave the Flyers a 1-0 lead in the first period after capitalizing on a turnover, beating Braden Holtby. Laughton scored again to make it 3-0 in the third.

Travis Boyd scored for the Capitals on a deflection in the third to make it 3-1. Washington is 0-2 on the restart.

“We have to handle ourselves a little bit better emotionally,” forward Nic Dowd said of the Capitals’ seven penalties.

The Flyers entered the round robin as the fourth seed in the East and missed the playoffs last season. Yet a win over Tampa Bay on Saturday earns them the top spot in the East. The Flyers haven't reached the second round since 2012, the Final since 2010 or won it all since 1975.

The Capitals play the Boston Bruins on Sunday for the No. 3 seed.