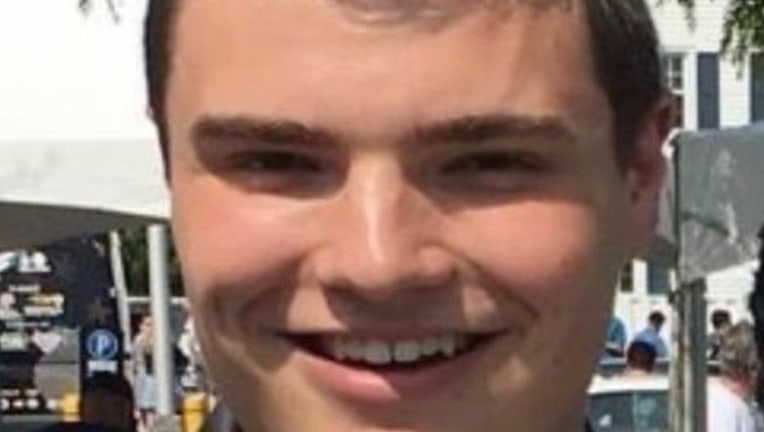 WILLINGTON, Conn. (AP) - A college student police say is an armed fugitive after killing two people was looking for a young woman he knew when he began his rampage, the wife of his first victim said Tuesday.

University of Connecticut senior Peter Manfredonia, 23, is a fugitive in the machete killing of the woman's neighbor, Ted DeMers, 62, of Willington, Connecticut.

He also is believed to have killed his own high school friend, Nicholas Eisele, 23, on Sunday about 70 miles (110 kilometers) away in Derby, police said.

Manfredonia was last reported seen in Pennsylvania on Sunday and is the target of a search involving police agencies and the FBI.

Cyndi DeMers, Ted DeMers' wife of 42 years, said in an interview that Manfredonia was looking for a female acquaintance when he came walking down the road in front of their Willington home wearing a motorcycle helmet.

When asked why he was walking down the rural road, Manfredonia said his motorcycle had broken down, Cyndi DeMers said. Ted DeMers was killed with a machete after giving Manfredonia a ride back to his bike.

"He said to my husband, 'I know so-and-so,' who is one of our neighbors, which then opened up the door to trusting this person," Cyndi DeMers said.

"I think he got in the way of what he was going to do," she said. "He was clearly walking to her home with a mission, with a machete in his backpack."

DeMers said she talked with their young neighbor's father over the weekend and was told the family had been considering a restraining order against Manfredonia, who had been to the home in the past. Her neighbors have been told by police not to return to their home until he is captured, she said.

An additional neighbor, who came to DeMers' aid, also was attacked. That man suffered serious hand injuries but is expected to survive, Cyndi DeMers said.

Connecticut State Police pleaded at a news briefing Tuesday for Manfredonia to turn himself in.

"We want you to be able to tell your story," Lt. John Aiello said. "We are hear to listen to you. Your parents, your friends, all of us back here in Connecticut want a peaceful end to this."

Manfredonia broke into another house in Willington over the weekend, stealing guns and a truck, and then headed south, police said. The truck was found Sunday in Derby, near Eisele's home.

Police said they believe Manfredonia killed his friend, then forced Eisele's 23-year-old girlfriend into her car and fled the state. The girlfriend was found Sunday at a rest stop near Paterson, New Jersey, with her 2016 Volkswagen Jetta and was not hurt, police said.

Manfredonia took an Uber to a Walmart in East Stroudsburg, not far from the New Jersey border, Pennsylvania State Police said Tuesday.

Police discovered through interviews with the driver and from security camera footage that Manfredonia walked behind the store and onto railroad tracks, authorities said.

Pennsylvania police said they don't believe Manfredonia has ties to the area, or a car. He might try to use another ride-hailing service to flee, the agency said.

Authorities are looking for a black 2012 Hyundai Santa Fe with Pennsylvania registration KYW-1650 that was stolen around 9 p.m. Monday. Police haven't connected Manfredonia to the theft, they said, but it was taken from the area where he was last seen on surveillance video.

Manfredonia, who is believed to be armed with several guns stolen during the home invasion in Willington, was last seen wearing a white T-shirt and dark shorts and carrying a large duffel bag. Police have circulated a photo of a person matching his description walking along railroad tracks in East Stroudsburg.

A lawyer for Manfredonia's family, Mike Dolan, said the suspect has struggled with mental health issues and has "sought the help of a number of therapists."

"Peter, if you are listening, you are loved," Dolan said at a news conference Monday. "It is time to let the healing process begin. It's time to surrender. You have your parents' and your sisters' and your family's entire support. So, Peter, from your parents, we love you, please turn yourself in."

Cyndi DeMers said she and her husband were looking forward to becoming grandparents for he first time next month. Ted DeMers would be remembered as a kindhearted man, always willing to help anyone in need. That, she said, was what he was doing when he was killed.

"He was like the neighborhood watch," she said. "He was home all the time, so he kind of kept an eye out. He was that guy."