Body camera footage appears to show police officers in Tennessee repeatedly plea with a man who stopped traffic on an interstate to drop a box cutter and surrender. (Credit: Metropolitan Nashville Police Department via Storyful)

NASHVILLE, Tenn. (AP) - Tennessee police officers repeatedly pleaded with a man who stopped traffic along Interstate 65 to drop a box cutter and surrender, saying no one wanted to hurt him.

Instead, he abruptly pulled another shiny object from his pocket and pointed it at police as if ready to shoot, prompting nine of the officers who surrounded him at gunpoint to open fire, killing him on the highway, according to officials and body camera video.

Nashville Police released the images and identified the officers involved within hours of the shooting of Landon Eastep, 37, of Nashville, on Thursday afternoon.

"Nine law enforcement personnel fired their weapons after Eastep took a stance as if he had a firearm," Nashville police spokesman Don Aaron said in the video. 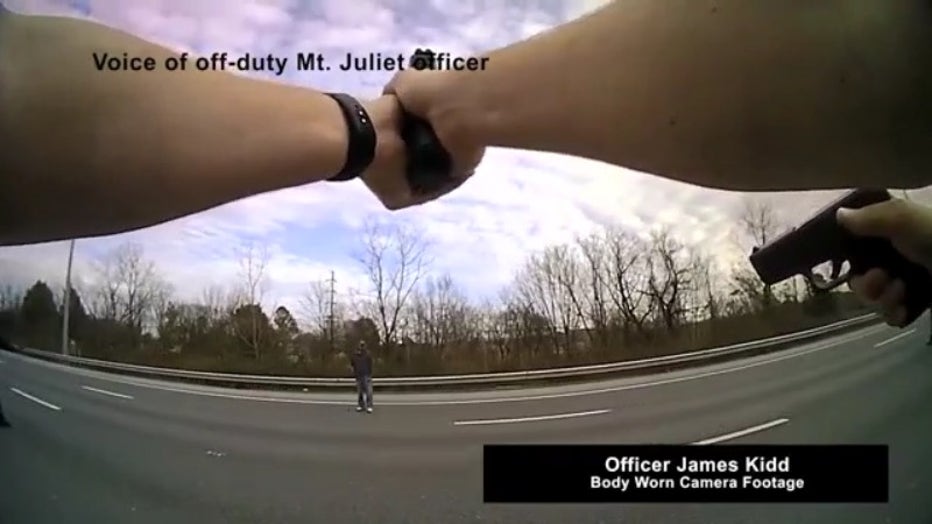 Body camera footage appears to show police officers in Tennessee repeatedly plea with a man who stopped traffic on an interstate to drop a box cutter and surrender. (Credit: Metropolitan Nashville Police Department via Storyful)

Aaron cautioned that the images may be disturbing, but said they were released so that people could better understand what happened.

The confrontation began when a Tennessee Highway Patrol officer saw Eastep sitting on a guardrail and stopped to offer him a ride. After a brief interaction, the man pulled a box cutter and the trooper called for backup, police said. Many other officers arrived, blocking traffic in both directions as a helicopter circled overhead.

"Whatever you’re worried about, we can fix it," an off-duty Mount Juliet officer who stopped on his way home can be heard telling Eastep. "Let us get you some help though. This is not the answer."

Later, Eastep can be seen putting his right hand in his pocket while still carrying the box cutter in his left.

"Come on brother, just drop the knife, get your hand out of your pocket. If that's a gun what you've got in there, don't worry about it, we'll figure it out! We'll fix it!" the officer said.

Aaron said officers tried to deescalate the situation for about 30 minutes.

"Brother, look I don't have a damn vest on and I still stopped ... because I want you to go home today. I don't want you to end up dead on the side of the interstate. Nobody wants that," the officer said.

Finally, later, Eastep pulled a "silver, shiny cylindrical object" from his pocket and pointed it at officers. The object, it turned out, was not a weapon, Aaron said.

The six officers working for the Metro Nashville Police Department who fired their weapons were placed on routine administrative assignment while the shooting is reviewed by the TBI. The Nashville department also is conducting an administrative review, Aaron said.

Nashville Mayor John Cooper said he was "disturbed" by Thursday’s shooting, adding that, "We will learn from this awful event and continue to do everything we can to prevent similar incidents in the future."

In September, Eastep's landlord filed an eviction case against him, court documents show. The following month, his wife filled out a registration form for them to participate in Nashville's judicially run diversion program that helps settle eviction cases during the COVID-19 pandemic between tenants and their landlords by securing U.S. Treasury Emergency Rental Assistance Program money or federal coronavirus relief funds.

"My husband Landon is a high risk for Covid19 due to him missing half a lung," his wife Chelesy wrote in the October application. "He got sick and lost his job and has had trouble finding work. We got behind on rent and haven’t been able to catch up."