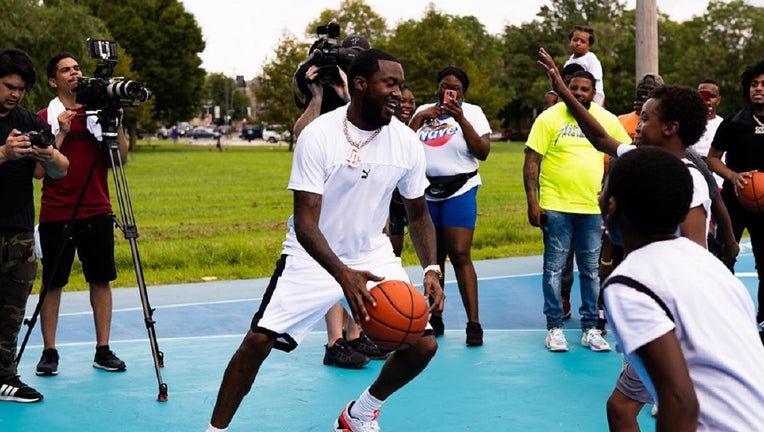 "Redid some basketball courts in my hood today!!!" Mill posted on Instagram.

NORTH PHILADELPHIA - On Saturday, rapper Meek Mill helped unveil a newly renovated basketball court near where he grew up in North Philadelphia.

The appeals court said new evidence in the case undermines the credibility of the officer who testified against the rapper at his trial and makes it likely he would be acquitted if the case were retried. A decision on whether Mill will be retried was recently delayed until later this month after his lawyer asked a judge for more time.

The 32-year-old rapper has been on probation most of his adult life over the teenage arrest.

He has become an activist for criminal justice reform since he was sent back to prison in 2017 for technical violations he blamed on his erratic travel schedule as his career soared. He spent five months locked up before an appeals court granted him bail.

Mill, whose real name is Robert Williams, has spent a total of about two years in prison over the case, including an initial term of about a year and several later stints over travel violations and painkiller use.

"The past 11 years have been mentally and emotionally challenging, but I'm ecstatic that justice prevailed," Mill said last month after his conviction was overturned. "Unfortunately, millions of people are dealing with similar issues in our country and don't have the resources to fight back like I did. We need to continue supporting them."

He is now free of the close scrutiny of Judge Genece Brinkley, who convicted him after a short nonjury trial in 2008 and called him back to court repeatedly during a decade of court supervision. Brinkley frequently complained that Mill was "thumbing his nose" at her, and once visited a homeless shelter to check up on his community service efforts. She later reprimanded him for sorting clothes rather than serving meals as she had ordered. He said he was directed to the job.

The Pennsylvania Superior Court removed Brinkley from the case as it granted Mill a new trial. Krasner's office must now decide whether to retry him, dismiss the case or try to negotiate a plea, perhaps to misdemeanor charges.