The first person to receive a COVID-related lung transplant in Michigan said she is able to do most things she wants and feels normal after the procedure.

DETROIT (FOX 2) - Jackie Dennis tested positive for COVID-19 in November, while she was pregnant.

The 31-year-old was admitted to Henry Ford Hospital and was induced a week later. After giving birth to her daughter, Mia Rose, Dennis' condition worsened and she was put on a ventilator. Then she needed to be sedated. 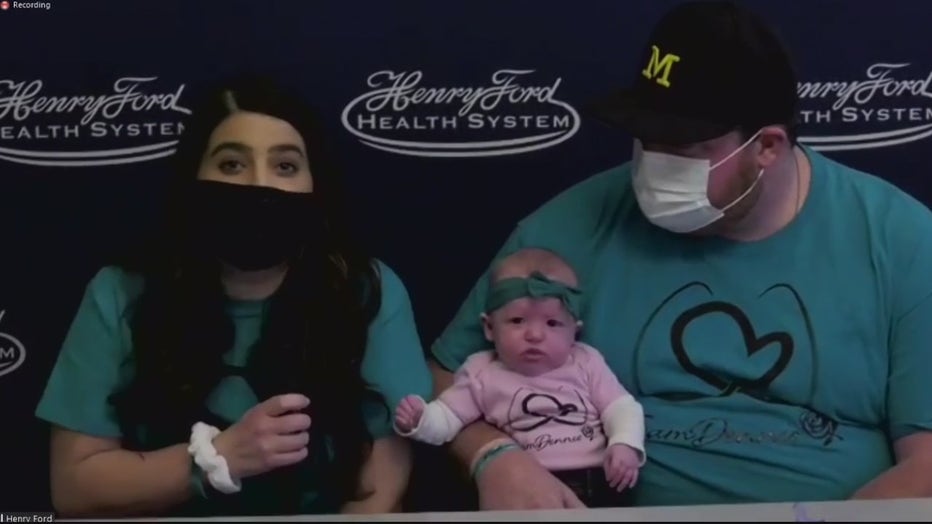 Jackie Dennis and her family.

"We waited to see if her lungs would improve on their own but it became very apparent that no recovery was possible," said Dr. Lisa Allenspach, the medical director of the lung transplant program at Henry Ford. "Her lungs were completely destroyed by this inflammatory response to the virus."

Dennis was placed on the transplant list and a donor was found 10 days later. She became the first COVID-related lung transplant at Henry Ford.

Allenspach said most patients who need a lung transplant have them after having chronic conditions for years, while it took Dennis only weeks to need one.

She described the lung damage as being "as severe as we've ever seen leading into a transplant."

Dennis is back home, but she still has a recovery ahead of her.

"I feel actually pretty normal," she said. "Generally speaking I can do almost everything I want to besides picking up Mia just yet."

Dennis said she credits the healthcare workers at Henry Ford for saving her life.

"It made it so that even though I was just begging to go home, it was sad to have to leave everyone because everyone at the hospital was truly amazing," she said.