DETROIT (FOX 2) - Nearly $30,000 has been raised for a Detroit family living in deplorable conditions after a teen son's chance encounter with a stranger.

The encounter happened earlier this week on Monday when Marcus Lotts was walking into Royal Fresh Market on Grand River and was stopped in his tracks by what he overheard from a young man who was standing outside the store. The teen was asking strictly for food, not money.

Tens of thousands of dollars has been raised for a Detroit family after a stranger's chance encounter with a teen son outside a grocery store.

Marcus struck up a conversation with the teen and ended up buying his family 10 bags of groceries, and even more the following day. But when he delivered the food to their home, he realized the family was in need of more than just food.

He saw black mold throughout the house, holes in the ceiling and a leaking roof, all of it forcing the nine siblings to sleep in the living room.

On Tuesday, their story aired on FOX 2 as Lotts was trying to get extra support for the family. But he never thought the community would pitch in like this.

"When I first put this video out I didn't expect it to have the impact it had. To me, I was doing something normal and something that was normal turned into something enormous like this," he said. The story sparked an outpouring of support from metro Detroit and even across the country. It's something Connesha Harris and her kids have never experienced.

"You all don't know how much love I've felt. Even though I've felt embarrassment I felt the love," Harris said.

In a matter of days a GoFundMe raised about $30,000 to help the family buy and furnish their first home.

The pastor of Impact Church and head of the nonprofit Bless Helping Hands, who helped Marcus with his efforts, met with Harris and her family to share the good news. 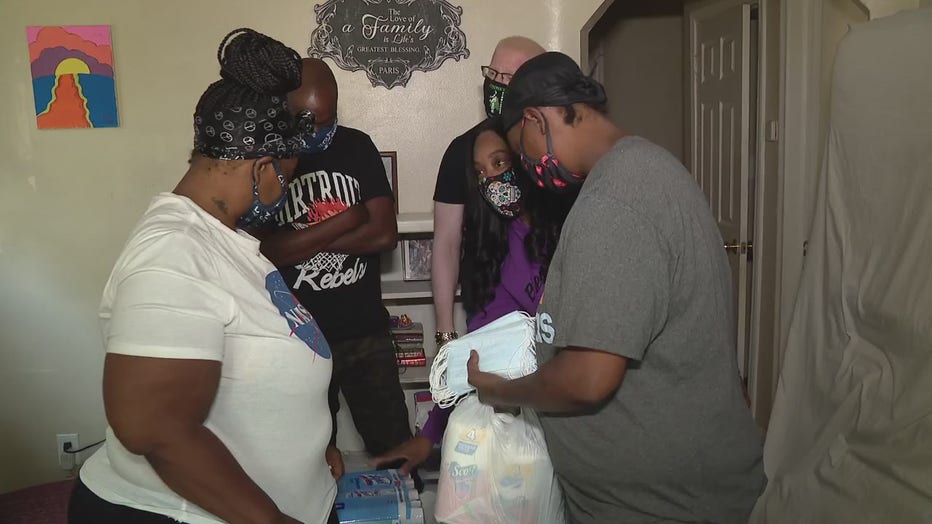 "Every time I see the GoFundMe go up, I get teary-eyed because they don't know me and they trusted that I am going to take good care of the family," Lotts said.

And Connesha vouches for him. She says he's been at their house every day this week helping the family.

Witnessing how his selfless act will impact this struggling family has now inspired Lotts to start his own no profit called the Florence Foundation after his grandmother. He wants to help other single-parent families feel secure once again.

"I just want to thank you all from the bottom of my own heart. If I could thank each of every one of you and give you all God bless, I would."

If you'd like to also make a donation to the family, you can do so via the GoFundMe page here.