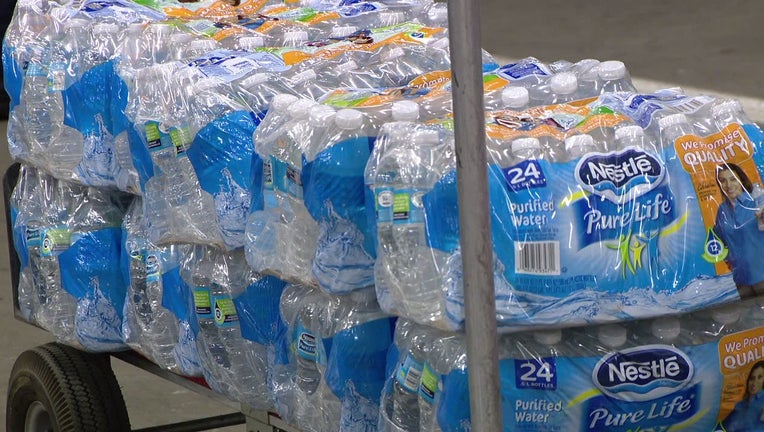 NEWARK, N.J. - Residents began picking up bottled water on Monday, days after elevated lead levels were found in homes where city-issued filters had been distributed months ago as part of an ongoing effort to combat contamination.

Newark has given thousands of filters to residents in homes with lead service lines. But the U.S. Environmental Protection Agency said recent tests showed drinking water in a few locations was still testing high for lead despite the filters.

Water was available at four locations Monday. The process was successful for some people, not so much for others.

Emmett Coleman, a senior citizen who said he is a heart transplant recipient, said he waited an hour for his two cases of water. He lugged them down the stairs and began to carry them up the street to his car before a worker came out to help him.

"In the senior building it's bad," he said. "All of us are sick or have problems, and we can't drink the water. And the filters aren't working."

Jessica Souffront went to the same office to get water but was told she didn't qualify and received a filter instead. Another woman said she became exasperated waiting for office staff to find her name on a list and left to buy water at the supermarket.

In a letter Friday to Newark Mayor Ras Baraka and New Jersey Department of Environmental Protection Commissioner Catherine McCabe, the EPA said tests on two homes using the filters "suggest that use of the specific filtration devices distributed by Newark may not be reliably effective" in reducing lead levels.

The EPA urged the city to advise residents to use bottled water for drinking and cooking. In a joint statement issued Sunday, Baraka and Democratic Gov. Phil Murphy cautioned that the city and state would "need support and assistance from the federal government."

An environmental group sued the city last year, alleging Newark's water has dangerously high lead levels and that the city has failed to conduct adequate monitoring over the years. The suit is pending in federal court.

As part of the lawsuit, the Natural Resources Defense Council has sought a court order to force the city to go door-to-door to instruct residents on how to use the filters, Improper installation and use of the filters may be contributing to continued high lead levels, Erik Olson, an NRDC drinking water expert, said Monday.